After the local community board removed a protected bike lane from its plans for the redesign of Queens Boulevard, Mayor Bill de Blasio restored it, under the premise of saving lives.
May 15, 2016, 9am PDT | Irvin Dawid
Share Tweet LinkedIn Email Comments 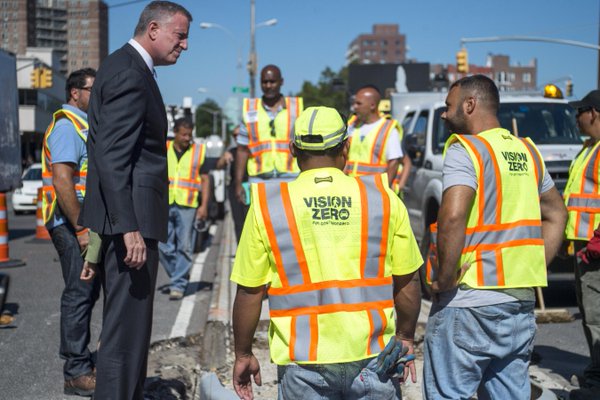 credit: NYC Office of the Mayor

Opposition to bike lanes is nothing new in New York City. Perhaps the most vocal opposition was against the Prospect Park West bike lane in Brooklyn in 2010. While opposition to such lanes continues (even against Prospect Park West), as evidenced in Queens by Dan Rivoli, mobility reporter for the New York Daily News, the need for bike safety trumps it when backed by a strong leader and committed staff.

"The city Department of Transportation will put in a new bike lane along part of Queens Blvd. even though the local community board doesn’t want it, Mayor de Blasio said Wednesday [May 11]," writes Rivoli. "The decision was announced after the chair of Queens Community Board 4 in Corona and Elmhurst removed the bike lane from a package of street safety designs to improve the notorious Boulevard of Death before voting to approve the changes Tuesday night.

Despite the community board's vote on the safety package without the bike lane, de Blasio said it was going in anyway as part of his Vision Zero* pedestrian and bicycle safety agenda.

“I respect those who disagree with us, but in the end, the safety of our neighbors and our children is the most fundamental responsibility we have in this work,” de Blasio said in a statement.

I have instructed the Department of Transportation to move forward on the next phase of safety enhancements to Queens Boulevard, including a protected bike lane for cyclists,” he said.

The article contains a map showing the three sections, known as operational projects, of Queens Blvd. that have been or will be redesigned. Operational Project 1, a 1.3 mile stretch, is finished and is a success by any standard. It won Streetsblog's 2015 Streetsie award for "Best Urban Street Transformation" and third place in People for Bike's third (2015) annual list of "10 Best New Bike Lanes." Take a Streetfilm tour here with Ryan Russo from the NYC DOT.

Rivoli's requests for comments from the community board were not returned. "Community boards have advisory roles in city planning, but opposition from these local bodies have led the city to scale back safety projects in the past," he notes.

Why the deadly moniker?

"Since 1990, 185 New Yorkers have lost their lives on Queens Blvd., mainly pedestrians," states Mayor de Blasio at the ceremony (YouTube, at 9:34 in the 41:42 minute video) in Woodside marking the opening of the first completed stretch of the redesigned road. Transportation commissioner Polly Trottenberg, as well as community advocates, are credited for the completion of the project in addition to the mayor.  More information on the boulevard here.

Vision Zero: According to the city webpage, "approximately 4,000 New Yorkers are seriously injured and more than 250 are killed each year in traffic crashes. Being struck by a vehicle is the leading cause of injury-related death for children under 14, and the second leading cause for seniors. On average, vehicles seriously injure or kill a New Yorker every two hours."