"Up until now, California has largely cut emissions by cleaning up its electricity sector," writes Plumer on the July 11 announcement by the California Air Resources Board that in 2016, emissions in the state were just below 1990 levels, thus meeting the mandate set in the Global Warming Solutions Act of 2006 (Assembly Bill 32) four years ahead of schedule.

Coal plants have shut down, replaced by natural gas and renewable energy. This is considered the low-hanging fruit of climate policy, aided by the falling costs of wind and solar power, and California has gone further than many other states on this score.

In addition, rains returned to Califonia and the West Coast in 2016, filling the state's reservoirs, and thus significantly increased use of carbon-free hydroelectric power.

So what’s the catch? It’s this: Things get much, much harder from here on out. California will now have to cut emissions an additional 40 percent by 2030 to keep meeting its climate goals, and that next phase will hurl the state into uncharted territory.

Plumer is referring to the successor bill of AB 32, which goes by the same title, author and number, but different letters: SB-32: California Global Warming Solutions Act of 2006: emissions limit, by Sen. Fran Pavely (D-Agoura Hills). Plumer, reporting for Vox at the time of the bill's passage in August 2016, had written about the lofty goal set by the successor bill.

It’s hard to overstate how ambitious this is. Few countries have ever achieved cuts this sharp while enjoying robust economic growth. (Two exceptions were France and Sweden in the 1980s and ’90s, when they scaled up nuclear power.) The EU is also aiming for a similar 40 percent cut below 1990 levels by 2030, though they’ve got a head start. [They've also got much higher gas and diesel prices dues to taxation].

But greening the electricity sector only gets you so far. Power plants now account for just 16 percent of California’s total emissions (compared with about one-third nationwide). The state will now have to look beyond power plants and address other hard-to-decarbonize parts of the economy.

Transportation, which accounts for 39 percent** of the state’s emissions and rising, is going to be the biggest challenge. Californians are driving more with each passing year and stricter fuel economy standards haven’t done enough to offset that. Gov. Jerry Brown has set a goal of putting 5 million zero-emissions vehicles on the road by 2030, but only about 205,000 battery electric and fuel cell vehicles have been sold statewide so far, along with 189,000 plug-in hybrids. 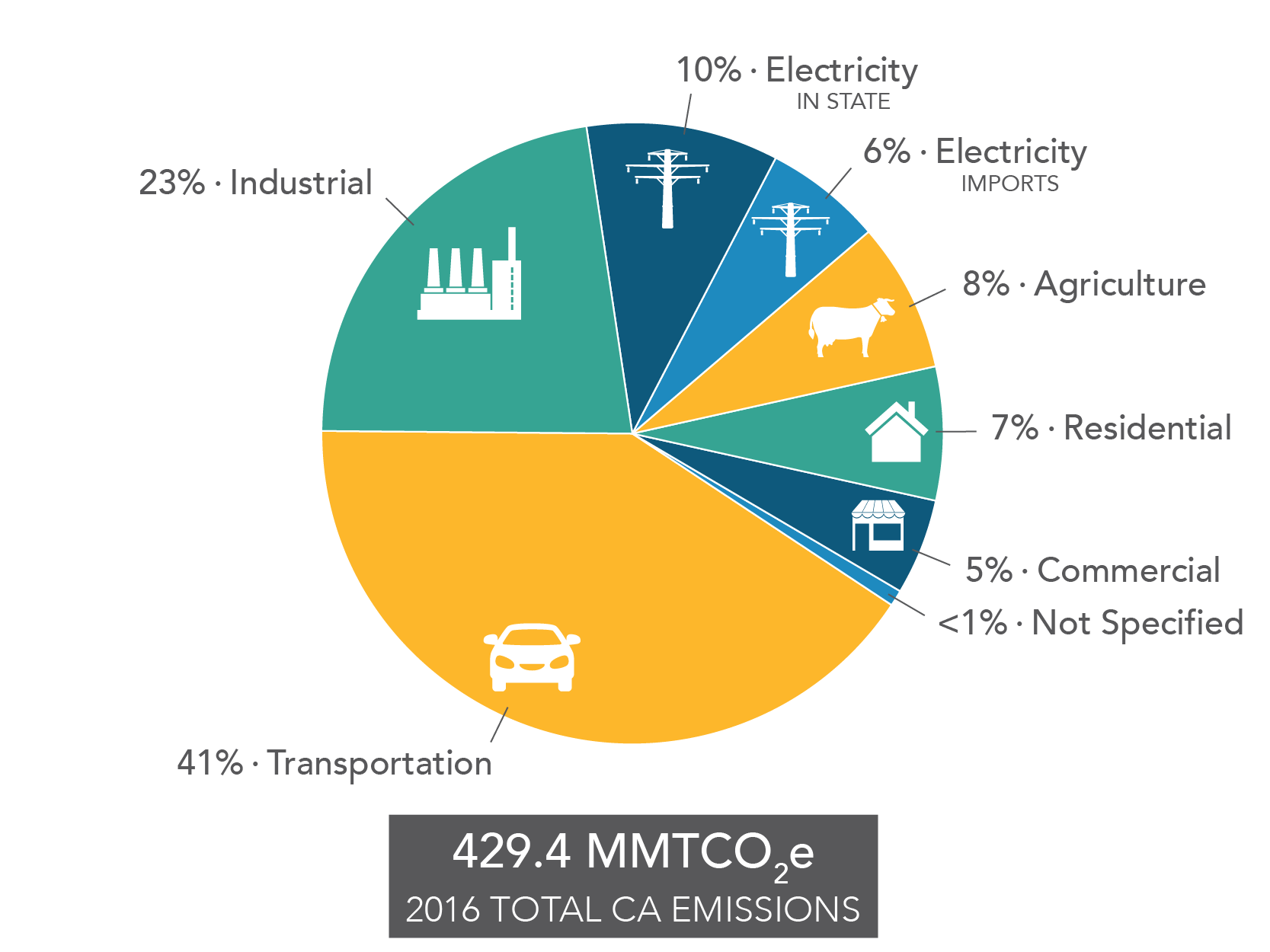 Courtesy of California Air Resources Board.

It won't be easy in light of recent political and legislative developments. Plumer points to:

And even with over a billion dollars in electric vehicle infrastructure investments, "trying to change how people drive is proving far more contentious than simply replacing dirtier power plants with cleaner ones," adds Plumer.

The rest of the country will be watching closely. Other states have also been making considerable progress in cleaning up their power plants and will soon face the question of what else they should do to cut emissions. As one economist put it to me last fall, California has basically volunteered itself as a “giant laboratory” to test out what works and what doesn’t. No pressure.

That professor was UC Berkeley economist Severin Borenstein who was cited by San Francisco Chronicle energy reporter David R. Baker in his article (posted here) on the state reaching its AB 32 targets.

“We have not made progress on transportation,” Borenstein said. “We’ve made negative progress.”

**Correspondent's footnotes: Direct combustion emissions from transportation amounted to 39 percent all greenhouse gas (GHG) emissions in the 2016 inventory, but when the indirect high global warming potential (GWP) emissions, like from vehicle air conditioning are included, transportation emissions amount to 41 percent of the GHG inventory pie. The clarification is also noted as a comment below the July 11 post on the 2018 GHG inventory report.

Also, note that Plumer's article, "California hit a big climate goal. Now comes the hard part," appears below the source article as it is part of The Times July 18 "Climate Fwd:" newsletter. It doesn't appear to have its own link.

Full Story:
CLIMATE FWD: When Did Talking About the Weather Become Political? (appears below this article)
Published on Wednesday, July 18, 2018 in The New York Times