Remembering the Weather of Winters Past

The new 23 miles of I-680 express lanes between San Ramon and Walnut Creek in Contra Costa County will begin construction this month, the first of over 500 miles to be built and operated by the Metropolitan Transportation Commission.
August 8, 2015, 7am PDT | Irvin Dawid
Share Tweet LinkedIn Email Comments

"The MTC aims to convert existing high-occupancy vehicle (HOV) lanes on I-680 between Alcosta Boulevard in San Ramon and Rudgear Road in southern Walnut Creek into express lanes that would charge tolls for access during peak commute times," writes Jeremy Walsh for the Pleasanton Weekly. "The project does not include freeway widening." Completion is set for late 2016. [see map below]. 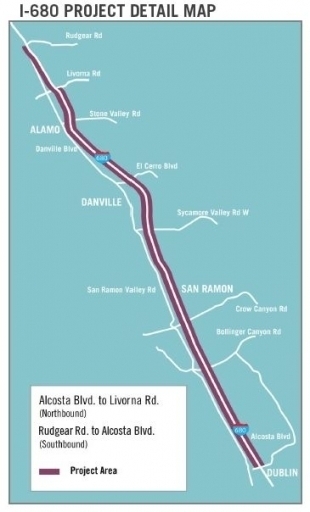 Single-occupant-vehicles with transponders would have use of the 23 miles of express lanes, subjected to dynamic pricing, i.e., prices increase along with usage, to keep traffic flowing at no less than 45 mph.

In a phone call, MTC spokesman John Goodwin explained that there would be no traditional groundbreaking. In fact, "installation" of the express lane facilities may have already begun. He anticipates no disruption to current use of the freeway as work would be done only at night.

The I-680 lanes are the first of the Bay Area Express Lanes (also referred to as high occupancy toll or HOT lanes) to be built and operated by the Bay Area Infrastructure Financing Authority (BAIFA), "a Joint Powers Authority between MTC and the Bay Area Toll Authority," as noted in the March 2014 post on the approval of the design contract. "It includes elected officials from Alameda, Contra Costa, Napa and Solano counties. Each of the Authority members also serves as an MTC Commissioner."

Existing lanes in the network were built by and are operated by:

Upon build-out, the entire Bay Area Express Lane network will consist of 550 miles.

Goodwin hailed the installation as a 'milestone.' It "reflects our commitment to get more performance out of the Bay Area's existing freeway network, and existing carpool lanes in particular," he stated.

The express lanes would be free to access for carpools, vanpools, public transit, motorcycles and eligible clean-air vehicles while other solo drivers could pay a toll to use the lanes. Toll lane hours and rates have not been finalized, Goodwin said.

In response to a question about potential oversubscription of the express lane, Goodwin explained that "express lanes are carpool lanes on which unused capacity is made available to toll paying vehicles."

Should sufficient congestion remain once the maximum price (yet-to-be-determined) is applied, the lanes would be closed to single-occupant vehicles; only carpoolers, clean car vehicles with appropriate decals, motorcycles and transit vehicles would have use of the lanes.

Construction costs are significantly less than if the project involved freeway widening or the addition of a lane. The construction contract approved in late-June was "worth a maximum $18.5 million with DeSilva Gates Construction LP to complete the lane conversions," writes Walsh. Total cost for the 23-mile project: $45 million.

Future projects undertaken by BAIFA will be in Alameda, Contra Costa and Solano Counties. Some will be conversions of existing carpool lanes only while others will involve lane additions requiring road widening.

Revenues from the express lanes will be plowed back into operations and used for other Bay Area Express Lane projects. If funds are available, they will be applied to improving public transit in the express lane corridor.

Opening this fall will be the "I-580 Carpool/Express Lanes along the Tri-Valley corridor though Dublin, Pleasanton and Livermore," built by the Alameda County Transportation Commission.

Remembering the Weather of Winters Past