From Utility to Amenity: Greening the Alleys of Los Angeles

Green alley projects are popping up in cities all over the U.S. and Canada in an effort to make the concrete jungle a little better at absorbing rainwater. A new alley program in Los Angeles goes beyond the runoff to actively integrate these unique spaces into the urban fold.

This article is part of an ongoing collaboration with Grist, the web's home for environmental news, commentary and humor.

They're all over the city, but you'd hardly know it.

Across Los Angeles, the city's alleyways account for more than 900 linear miles of pavement. If you put them all together, the city's alleys would make up about 3 square miles – about half the size of L.A.'s Griffith Park, twice the size of New York's Central Park, or the equivalent of about 400 Wal-Marts (not including parking). They're peppered throughout the city, in neighborhoods, commercial zones, downtown, and L.A.'s industrial areas. But for the most part, these alleys are ignored.

"In many, many parts of the city, absolutely nothing happens in these places. Very, very low traffic, very little pedestrian activity. They're basically just sitting there," said Jennifer Wolch, a professor of geography at the University of Southern California and director of the university's Center for Sustainable Cities. The Center has published a series of reports on the use and perception of the city's alleyways and finds that activity occurs in alleys only about 20% of the time – and much of that activity involves either driving or walking through. 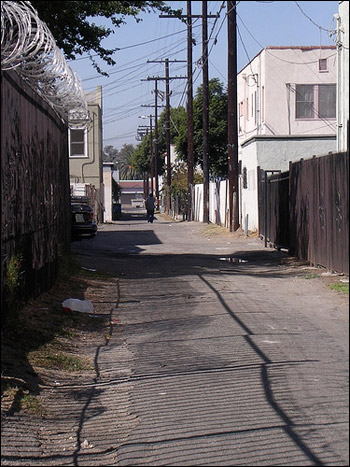 By their nature, alleyways are utilitarian spaces. Often built as access routes to parking facilities or loading zones, these mini-streets were never intended to be vibrant elements of the urban fabric. But now, some in L.A. are starting to think that maybe they should be.

Wolch and the Center for Sustainable Cities are leading the push, rallying for the creation of a Green Alleys Subcommittee of L.A.'s Green Streets Committee and working with planners and other city officials to get green alleys on the city's official agenda. The objective is to re-work the city's alleys to reduce runoff and better absorb rainwater through the use of permeable pavements, landscaping and bioswales. In December, the city council agreed, and created a citywide Green Alleys Program.

It's an idea taking root all over North America. In 2006, the city of Chicago announced a pilot plan to begin converting the city's alleyways into green, permeable areas that would absorb stormwater and improve local water quality. Now, alley conversion funding is included as line item in the city budget, and more than 80 green alleys have been installed.

Another program in Seattle also targets stormwater by addressing road and alley design. By reducing impervious surfaces, installing bioswales and increasing the amount of landscaping along roadways, the city has reduced stormwater flooding and facilitated groundwater recharge. In a two-year study of one pilot project, the amount of stormwater leaving the street was reduced almost completely. A similar program has also been established in Vancouver, with three completed pilot projects.

Addressing stormwater has been the primary focus of these programs, but in Los Angeles, officials are taking a wider view.

"It's not just about capturing stormwater," said Simon Pastucha of the L.A. Planning Department's Urban Design Studio, which is working on design guidelines and selection criteria for the city's Green Alleys Program. He says planners in the city are going to have to think more broadly about the way alleys are used in the city -- and get more creative when they think about what they could become.

Opportunities abound, according to Pastucha, but a lot of the potential depends on the place. An alley in industrial L.A. could hardly be treated the same as another behind a schoolyard. So planners are trying to figure out how to integrate appropriate uses throughout the city in an organic way.

But it's not just planners who are rethinking alleyways. Business owners in the Hollywood Business Improvement District recently approved a new tax assessment on themselves that creates a fund dedicated to the alleys of Hollywood. The $125,000-a-year fund is supported by about 50 business owners in the area. And while the initial goals are cleanup and maintenance, merchants are hopeful that their alleys can become more than dumping grounds, according to Hollywood BID Assistant Executive Director Sarah MacPherson.

Cities like Portland and San Francisco have shown that alleys can be embraced in commercial areas, with successful dining and retail establishments taking advantage of these distinctive outdoor areas. But in L.A., alleyways are for the most part background players, hidden throughout the city's residential areas.

The highest concentration of alleys is in dense single-family residential neighborhoods, according to one of the reports produced by USC's Center for Sustainable Cities. The majority of these are in South Los Angeles, a sprawling, primarily low-income part of the city that has struggled for decades with crime. Alleys in this part of town have the unfortunate reputation of being dirty, scary, and hotbeds for criminal activity. This reputation – often founded in reality – has led many in South Los Angeles to be wary of alleys and to only use them if necessary.

Things got bad enough that in the mid-1990s L.A. instituted a program to gate off problematic alleyways. To prevent criminal activities like drug sales and dumping, a citywide Nuisance Alley Closure Program gated off alleys and shifted maintenance responsibility to adjacent neighbors, according to the city's Board of Public Works. The result, however, was a mixed blessing.

"It wasn't a very good program in the sense that there was no money to fix these places up and there also wasn't any money for maintenance," said Wolch, who says many alleys simply went untended once the gates went up. "On the one hand it made them safer in a way, but it also made them more of a problem in terms of maintenance. At a minimum they were just derelict spaces."

The California Supreme Court ruled in 2004 that gating off alleys is illegal, so the practice has stopped, but many alleys remain behind bars. Bringing them back into the public sphere is a big part of L.A.'s Green Alleys Program, and one that distinguishes it from those in other cities. Part of the effort is to utilize the alleys in residential areas like South L.A. to create new public green spaces and green connectors.

"There are many parts of the city where there's so little playspace and greenspace that to ignore this space is shortsighted," Wolch said.

Only 7.8% of the city is parkspace, making L.A. the most park-poor big city in America. Re-envisioning alleys as pocket park spaces is one way to address the shortage, according to Wolch, who envisions landscaped alleys providing connections between housing and schools, parks and shops.

Making these changes is the goal of the city's Green Alleys Program, but they are not likely to come easy. An obvious hurdle is funding, given the current economic downturn that has affected many city budgets, Los Angeles included. But through public-private partnerships and various stormwater-related state and federal programs, generating funding for alley greening projects is still feasible, according to Wolch. Another equivalent challenge is actually internal: getting alleys on the radar of other planners.

The Green Alleys Program is currently in the process of establishing design and project selection criteria to include in planning documents like specific plans that make alley consideration a requirement for planners. A full set of design criteria aren't expected for about a year. Aside from initial staff funding for policy development, the L.A. City Council's approval of the Green Alleys program doesn't include any funding for pilot programs. Despite the lack of funding, citizens groups and other organizations have already come forward with ideas for alley projects throughout the city. And as the Green Alleys Program gets started, the idea of re-imagining the city's alleyways also seems to have gained momentum.

Other Planetizen news and commentary about alleys and cities