Since 2017, the largest source of greenhouse gas emissions in the United States has been from the transportation sector, mostly from passenger vehicles, yet it seems that the power generation sector continues to grab the lion's share of attention when it comes to mitigating emissions. Policymakers in the Transportation and Climate Initiative (TCI), which will use a cap-and-invest as well as trade program, have taken a page from the power sector by adopting a program used by the Regional Greenhouse Gas Initiative.

"A coalition of New England and mid-Atlantic states on Tuesday took a first step toward limiting transportation emissions across 12 states and the District of Columbia," reports Rebecca Beitsch for The Hill.

At the heart of the draft proposal an effort that would place pollution limits on middlemen who bring gasoline to U.S. consumers, forcing those companies to buy credits to compensate for pollution that will stem from their products...[I]nstead of power plants their efforts will be focused on oil terminals that store fuel before it heads to market as well distributors of gasoline.

Leaders involved in the effort are unsure whether their proposal would raise prices at the pump.

The 12 states are Connecticut, Delaware, Maine, Maryland, Massachusetts, New Hampshire, New Jersey, New York, Pennsylvania, Rhode Island, Vermont, and Virginia, in addition to the District of Columbia. The last member to join the initiative was Virginia in September 2018. 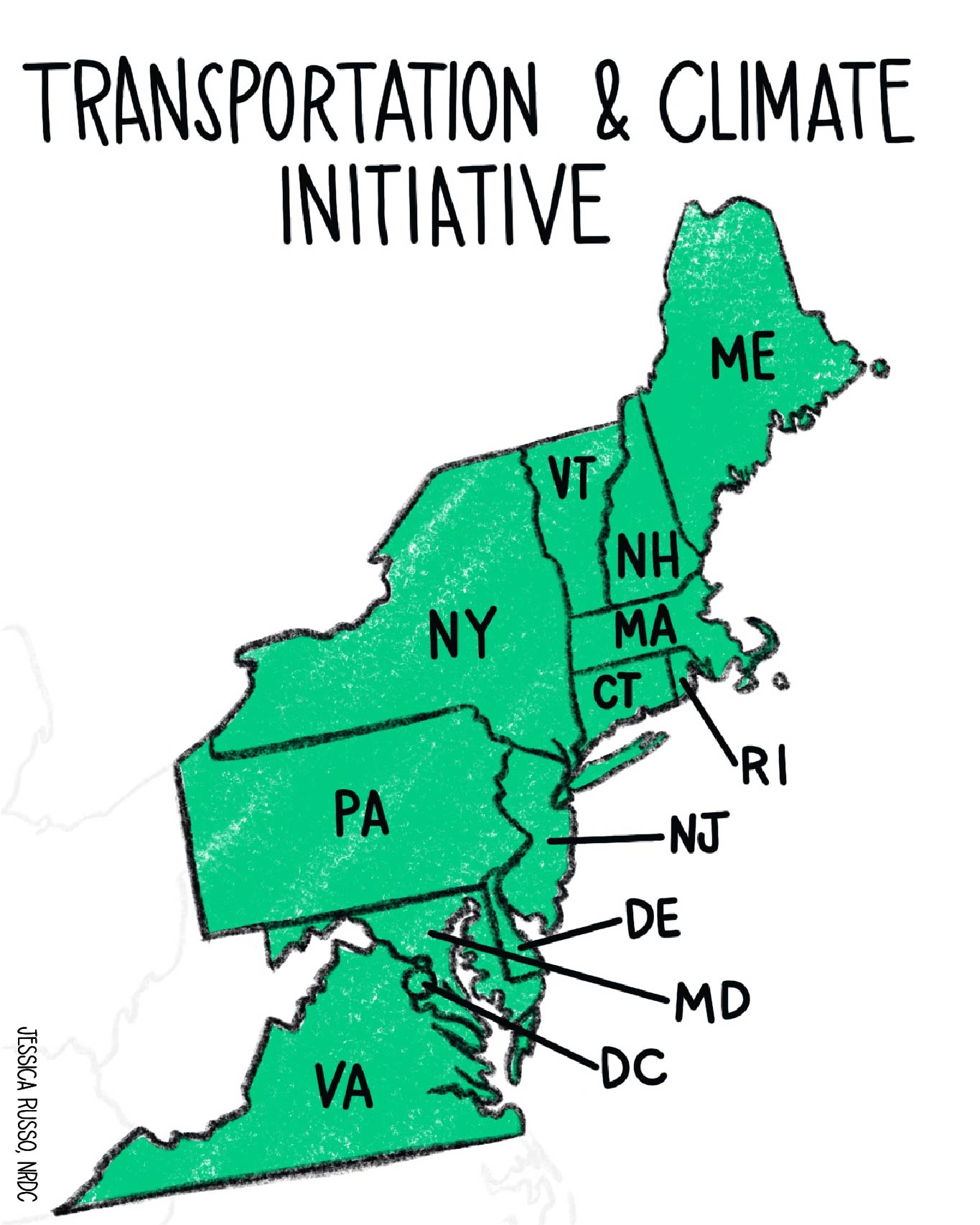 Credit to Our Transportation Future and Natural Resources Defense Council

"The proposed program would cap emissions of carbon dioxide from the combustion of the fossil component of finished motor gasoline and on-road diesel fuel in the region," states the four-page "Framework for a Draft Regional Policy Proposal" [pdf].

The TCI jurisdictions are evaluating whether and how to include and treat biofuels in the program. Affected fuel would include fuel destined for final sale or consumption in a TCI jurisdiction, upon removal from a storage facility...

A sampling of reactions to the draft framework was released Tuesday by Our Transportation Future, a coalition of 64 leading environmental, scientific, transportation, health, and business organizations across the Northeast and Mid-Atlantic region advocating in support of TCI.

“Taking on the largest source of air pollution will require bold solutions, and the TCI framework released today offers a solid foundation for a bold, regional cap-and-invest program,” said Jordan Stutt, Carbon Programs Director at Acadia Center. “The TCI states need to build on that foundation by establishing an ambitious cap on emissions..."

“We are heartened by the broad TCI framework released today," said Nancy Goodman, vice president for policy, Environmental League of Massachusetts.  "This effort to price carbon within a region has great promise for addressing emissions from transportation..."

David Abel of The Boston Globe also reports (behind paywall) on the draft framework. His article also was posted (without a paywall) by Our Transportation Future:

“This entire project aims to reduce emissions, improve public transportation, equity, mobility, and engagement,” said Kathleen Theoharides, secretary of the Massachusetts Executive Office of Energy and Environmental Affairs, who has chaired the effort known as the Transportation Climate Initiative.

Theoharides said the states are still negotiating over whether to place requirements on how the proceeds from the pollution permits, also known as allowances, could be used. The goal is to invest the money in a range of transportation-related projects, such as public transit, carpooling, and subsidies to accelerate the adoption of electric vehicles, she said.

"A final agreement isn’t expected until spring 2020," adds Beitsch for The Hill.  Pete Rafle, communications director for the Georgetown Climate Center which facilitates TCI's efforts, clarified in an email that all 13 members will determine whether to sign the memorandum of understanding at that time, regardless of whether they signed the December 2018 Initiative Statement [pdf], the subject of our first post on the initiative that was launched in 2010.

More information on what TCI calls its "regional policy proposal design process" can be found in this 2-page fact sheet [pdf].