Why was BART's Ridership Forecast for Millbrae Station So Wildly Off-Base?

The Millbrae Station was part of a five-station extension from Daly City, then the southern terminal of the Bay Area Rapid Transit system located just south of San Francisco in San Mateo County, to Millbrae and the San Francisco International Airport (SF0). The extension opened in June 2003. 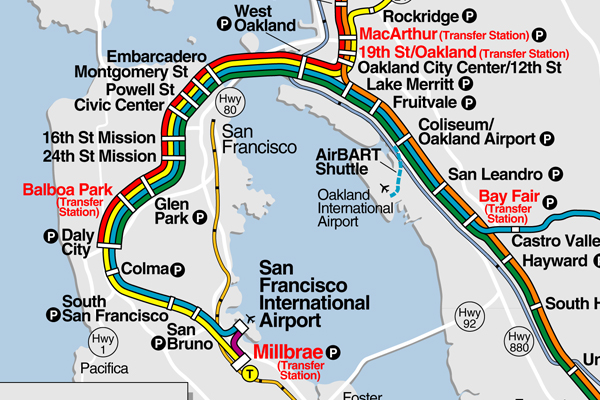 Among the reasons that BART offers to explain why the projection was so wildly off-base, reported by Michael Cabanatuan for the San Francisco Chronicle:

On that last bullet, letter-writer Felicia Charles of Millbrae comments:

The low ridership at BART’s Millbrae Station is no surprise. City planners have been talking for almost 20 years about developing the area around the station for mixed residential and commercial use.

Millbrae would be more than just a place for riders to make transfers between Caltrain and BART — a true bustling transit — if such development had already occurred...

Problems abound  for the Caltrain-BART transfer, mainly due to the Caltrain schedule, which can be limited to one train an hour depending on the time of day. But it was unrealistic to think that most San Francisco-bound Caltrain commuters would transfer to BART for a longer trip with more stops to San Francisco, notwithstanding Caltrain's distant terminal from Market Street in downtown San Francisco, which BART serves with several stops.

What's not mentioned by Cabanatuan was the role that politics played, particularly by a former San Francisco supervisor and then-state senator Quentin Kopp, who was determined to see BART go directly to San Francisco International Airport at a stub station, rather than to a shared Caltrain-BART-SFO AirTrain station.

“If the SFO extension does not go directly into the airport people will simply not use it," stated Kopp. "People will not use a system that requires them to transfer.” [September 1990; page 9 of MIT study below].

What Kopp didn't say is that upon arrival in the airport, almost all passengers would need to transfer to the SFO AirTrain to get to their terminal.

The "politics over planning" outcome is laid out in two academic papers on the BART to SFO extension:

The two-stops vs. one stop decision came down to two San Francisco local ballot measures in June 1994, writes MIT's Wenzel.

What San Francisco voters were not aware of with the Measure I ballot was that extra track and an extra station to the south of SFO in Millbrae would also have to be built adding over $500 million to the total project costs with negligible gain in ridership.

Fortunately, not all ridership forecasts are so wildly wrong. Consider L.A. Metro's extension of the Expo Line to Santa Monica which opened in May of last year. This month ridership reached the 2030 projection.