Despite numerous traffic safety programs, traffic death rates have not declined in a decade and recently started to increase. We can do better! A new paradigm identifies additional safety strategies that reduce both crash rates and risk exposure. During this holiday season thousands of North Americans will be unnecessarily killed or severely injured in crashes. We could do much better!

The United States has the highest traffic fatality rate among peer countries, nearly three times the European average and easily twice the averages of Australia and Canada.

Similarly, within the United States, traffic fatality rates vary by four fold. What explains these differences? Do New York, San Francisco, and Cleveland, which have about four annual traffic deaths per 100,000 residents, have better traffic safety policies and programs than Birmingham, Miami, or Memphis, which have more than 16? No, don't blame high traffic death rates on inadequate traffic safety efforts, blame them on higher per capita vehicle travel, as illustrated below, and therefore automobile-dependent transportation planning and sprawl-inducing development policies; those are the true culprits. 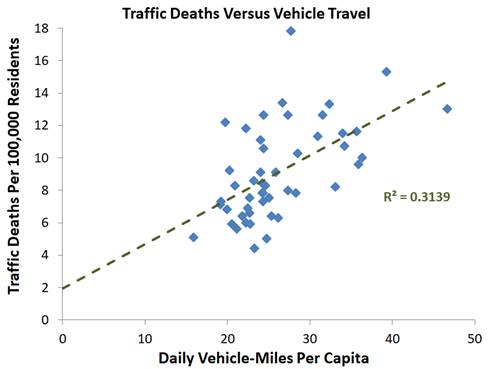 Current trends are not encouraging for automobile-dependent areas. During the last half century, U.S. distance-based and per capita traffic death rates declined significantly, but these declines stopped about a decade ago, and fatality rates increased in the last few years, as illustrated below. 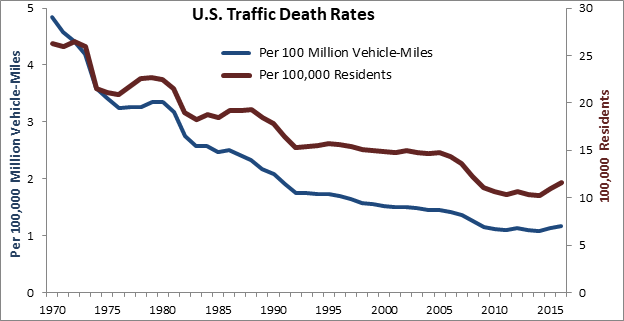 This indicates that new approaches are needed to achieve ambitious new traffic safety targets such as Road to Zero.

My recent report, "A New Traffic Safety Paradigm," examines factors that contribute to high crash rates, and identifies numerous potential safety strategies that are not being applied in most North American communities. In a word, the new paradigm recognizes exposure—the amount that people travel—as a risk factor. Total traffic crashes are the product of distance-based crash rates (such as casualties per 100,000 million vehicle-miles) times per capita vehicle travel; a change in either tends to cause similar changes in total crashes. My report describes numerous studies that use various methods and data sets to demonstrate this relationship. For example, the figure below shows the relationship between annual mileage and crashes among countries, indicating that the United States' high traffic death rate can be explained by its high per capita vehicle mileage. Similar patterns are found at regional and local geographic scales: areas with higher per capita vehicle travel generally have higher per capita traffic fatality rates.

To determine whether these strategies can be effective, I compared traffic fatality trends in three cities that emphasized multimodal planning (Denver, Portland, and Seattle) with three cities that have conventional, automobile-oriented planning (Atlanta, Houston, and Oklahoma City). Between 2004 and 2014 the multimodal cities experienced much larger traffic fatality rate reductions (47%) than the automobile-oriented cities (19%). This indicates that more multimodal planning can provide large safety benefits in less than a decade. Some new paradigm safety strategies, such as increased transit service, fuel and parking price increases, and commute trip reduction programs, can be implemented in just months.

The table below summarizes fifteen New Paradigm traffic safety strategies, with an estimate of their typical crash rate reductions.

Of course, these impacts will vary depending on specific conditions and program design. Many of these strategies have synergistic effects (total impacts are greater than the sum of their individual impacts), and so are most effective if implemented as an integrated program. For example, many conventional traffic safety strategies attempt to reduce higher-risk driving, such as graduated licenses to reduce youth driving, special testing to identify high-risk senior drivers, and anti-impaired driving campaigns. To be effective and fair, these strategies require suitable mobility options so youths, seniors, and drinker have functional alternatives to driving. Similarly, anti-impaired driving campaigns should be implemented with Smart Growth development policies that create more compact and mixed neighborhoods, so it is easier to visit a restaurant or pub by walking or public transit rather than driving.

My report evaluates 16 major traffic safety programs, and finds that only five even mention vehicle travel reduction safety strategies, and none provide guidance on evaluating or implementing them. Although unfortunate, this is understandable. Traffic safety experts have been trained to focus on special risk factors, such as impaired and distracted driving, and speeding, and so consider targeted safety strategies most cost effective. From this perspective it seems inefficient and unfair to reduce total driving for safety sake, because it "punishes" all drivers for errors made by an irresponsible minority. In addition, most safety experts want their past traffic safety efforts to be validated, they tend to resent critics who suggest that their efforts are inadequate and miss-directed.

This is not to ignore the benefits of conventional traffic safety programs, which significantly reduced crash casualty rates during the last half-century. However, those strategies have largely achieved their potential, and persistent high traffic crash casualties in areas where such programs operate indicates that additional strategies are needed to further increase safety. New paradigm safety strategies will be essential for achieving ambitious traffic safety targets.

In Vancouver, British Columbia, dramatic reductions in automobile travel and resulting benefits demonstrate that integrated TDM and smart growth policies can help create cities that are healthy, wealthy, and wise.