Lead UMR author Dr. Tim Lomax subsequently posted his responses in a document, Congestion Measurement in the Urban Mobility Report: Response to Critique by Mr. Todd Litman. The revised version of my Critique includes Table 6, Point-Counter-Point Dialogue, which summarizes my specific concerns, Dr. Lomax's responses, and my latest comments. It is too long to post here, but I encourage you to read both documents so you to make your own judgments about these issues. 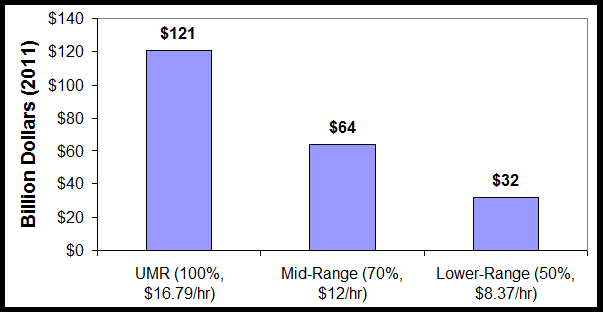 I believe that to be more accurate, the Urban Mobility Report should either become more comprehensive and multi-modal or be renamed the Urban Congestion Report to more accurately indicate its scope. Cities are, by definition, places where many people and acivities occur close together, and so require multi-modal transport systems to function efficiently. The UMR only measures one factor: motor vehicle traffic congestion. This reflects an outdated planning paradigm which assumed that “transportation” refers only automobile travel, and the only planning goal is to maximize traffic speeds, ignoring other modes and objectives. Efficient urban transport planning must consider a wider range of modes, impacts and options, and recognizes conflicts between various objectives.

Why does this matter? What problems will result if urban transport planning incorporates exaggerated congestion cost values?

Comprehensive and accurate valuation of congestion costs is important because urban planning often involves trade-offs between conflicting objectives such as between traffic speed and safety, and between automobiles and other forms of access. For example, expanding urban roadways may reduce congestion but tends to create barriers to active modes (walking and cycling), and since most public transit trips involve walking links, it also reduces public transit access. Exaggerating congestion costs undervalues other impacts and modes, leading to economically excessive roadway expansion and underinvestment in alternatives, resulting in a transport system which is less efficient, diverse, affordable, safe, healthy and equitable than optimal.

Congestion costs are actually moderate overall, larger than some but smaller than others. For example, annual per capita U.S. congestion costs are estimated to total between $110 and $390, compared with about $4,000 in vehicle costs, $1,500 in crash damages, $1,000 in parking costs, $500 in air and noise pollution costs and $325 in roadway costs, as illustrated below.

Congestion cost estimates range between $110 and $390 annually per capita, depending on analysis methods. Even the higher estimate is moderate compared with other transport costs.

As a result, a congestion reduction strategy may be worth far less overall if it increases other costs, and worth far more if it provides other benefits. For example, a roadway expansion may seem cost effective considering congestion impacts alone, but not if it induces additional vehicle travel which increases parking congestion, accidents and pollution emissions. Conversely, alternative mode improvements may not seem inefficient considering congestion reductions alone, but are cost effective overall when co-benefits (parking cost savings, traffic safety, and improved mobility for non-drivers, etc.) are also considered.

It is also useful to compare congestion with other factors that affect the amount of time people spend traveling. For example, according to the UMR, Washington DC’sautomobile commutersexperienced 67 average annual delay hours, but since that region has only 43% automobile commute mode share, this averages just 29 hours percommuteroverall. In contrast, Houston’sautomobile commutersexperience a somewhat lower 52 annual delay hours, but since it has a 88% auto mode share this averages 46 hours percommuter, much higher than in Washington DC.

Exaggerating congestion costs and undervaluing other congestion reduction strategies tends to result in economically excessive roadway expansion, and underinvestment in alternative modes, such as grade-separated public transit, and demand management strategies, such as more efficient road and parking pricing. This mattered less during the twentieth century when VMT was growing rapidly, so there was little risk of overbuilding roadways – any excess capacity would eventually be used, it was simply a question of when. However, now that automobile travel has peaked in most developed countries, and society is increasingly concerned about the external costs of excessive automobile dependency, overbuilding has become as economically harmful as underbuilding roadway capacity.

Comprehensive and accurate analysis of impacts (benefits and costs) is the key to rational planning. Planners should strive to apply the best evaluation methods and explicitly identify potential omissions and biases.