As a result of these omissions and biases the UMR tends to overestimate congestion costs and roadway expansion benefits and undervalues other congestion reduction strategies that provide additional benefits, in addition to reducing congestion. Its methods and results are at odds with most other congestion cost studies. Its $166 billion annual congestion cost estimate is about twice the $87 billion estimated by INRIX, the organization that provides the basic data used in UMR's analysis. The figure below compares the UMR's cost estimate with those resulting from input values recommended by most economists. Its cost estimates should be considered upper-bound values that are significantly higher than results using more realistic assumptions. 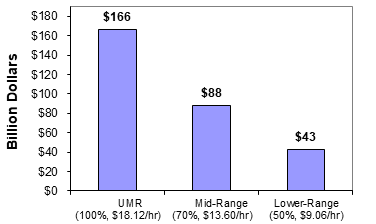 One of the UMR's themes is that most North Americans must or prefer to drive, and so prefer roadway expansions over policies that shift travel to other modes or create more compact communities. This is why they can use the term commuter when they really mean automobile commuter or urban peak driver. Yet, this is another exaggeration. In fact, automobile mode shares tend to decline as traffic congestion increases. For example, although public transit typically serves just 1-3% of total regional trips, it represents a larger portion of urban commuting (typically 5-10%) and an even greater share (typically 10-50%) of peak-period travel to major activity centers such as central business districts (CBDs) and campuses, as illustrated below.

The UMR also ignores basic research principles. It contains no literature review, fails to clearly explain its assumptions or document sources, does not discuss potential biases, has no sensitivity analysis, and lacks independent peer review. The current edition provides less information about its methods than previous versions. It does not give readers the information they need to understand its results.

The table below evaluates how well the UMR's analysis reflects best practices.

How This Affects Planning

These analysis biases are significant because planning decisions often involve trade-offs between different problems and solutions. For example, road space can either be used for general traffic lanes or bus lanes, and money spent to expand roads is unavailable for other purposes. By exaggerating congestion costs relative to other impacts the UMR tends to overvalue urban roadway expansions and undervalue other transportation improvement strategies that provide other benefits.

What difference does it make whether U.S. national congestion costs are estimated to total $40 billion, $87 billion, or $166 billion? These numbers are beyond anybody's comprehension. However, congestion costs are often incorporated into planning analyses, such as how to improve urban transportation in a particular situation. By exaggerating congestion compared with other transportation costs, such as consumer costs, accidents and pollution emissions, and by ignoring the incremental external costs of induced travel caused by roadway expansions, the UMR's results overvalue roadway expansions and undervalue other transportation improvement strategies such as improved mobility options, more efficient pricing, policies that create more compact development, and TDM programs that encourage travelers to use more space-efficient modes.

As a result, a congestion reduction strategy provides far smaller total benefits if it increases other costs, but provides far larger benefits if it helps reduce other costs. For example, a roadway expansion provides less benefits if by inducing additional vehicle travel it increases parking subsidy costs, accidents or pollution costs imposed on other people, while a bicycle or public transit improvement is worth far more if it improves mobility for non-drivers, improves public fitness and health, or reduces total pollution emissions in addition to reducing traffic congestion.

Impacts of Omissions and Biases on Planning Decisions

The UMR is propaganda: information selected to promote a particular ideology or policy. It is intended to define traffic congestion as major problem and to justify highway expansions. This is evident in the report press release which describes congestion as "gridlock," and recommends more roads as its first solution. The press release and report use the term commuter when they really mean automobile commuter, and they describe motorists as congestion victims without acknowledging that they also perpetrators. This victimization makes it difficult to implement the most effective congestion reduction strategies, such as decongestion pricing, HOV and bus-lanes, and parking policy reforms, because they are perceived as adding to motorists' burdens. It is notable that the UMR recommends more roads, transit, telework, adjusting work hours and smarter land use, but never mentions pricing reforms or TDM programs.

In fact, traffic congestion tends to maintain equilibrium: it increases to the point that delays discourage some potential peak-period trips. As a result, it is wrong to extrapolate trends to predict future congestion problems - it almost never reaches true gridlock - and expanding roadway supply seldom provides durable reductions. The most effective way to reduce congestion over the long run is to reduce the point of equilibrium by improving alternative modes, particularly high-quality transit, and applying decongestion pricing (road tolls and parking fees that are higher under congested conditions and decline or disappear at other times and places).

The fact that there is little support by motorists for decongestion pricing or major tax increases to finance roadway expansion is empirical evidence that they do not really consider congestion a major cost; most motorists would rather complain than pay to reduce their congestion delays.

Traffic congestion is to urban travelers what tides are to sailors, a force that they take into account when planning trips. For example, shippers adjust delivery schedules to avoid rush hour, commuters choose where to live or work, and their commute mode, based on congestion intensity, and residents run errands during off-peak periods. It's a constraint, but smart travelers work with it to minimize their costs. The UMR ignores these issues.

The UMR also does not help its case when it comes to explaining its methods. It lacks contextual information: there is no literature review, it does not explain its assumptions, does not discuss potential biases, it includes no sensitivity analysis, and lacks peer review. There are also few citations and no discussion of why they chose their specific methods and values. As a result, readers are unable to verify the report's results or perform additional research.

The UMR's approach is a throwback to an earlier age. Most planning professionals and jurisdictions are shifting from purely automobile-oriented performance evaluation, using indicators such as roadway level of service and the Travel Time Index, to more multi-modal [pdf] and accessibility-based [pdf] indicators, such as average commute duration, the number of jobs accessible within a 30-minute commute by auto and other modes, and per capita Vehicle Miles Travelled (VMT), assuming that less is better [pdf]. Many jurisdictions now require these indicators and targets; for example, California law and Washington State laws mandate VMT reduction targets, and some cities [pdf] have similar policies. A report which assumes that automobile congestion is the only significant urban transportation problem, without considering other modes, goals and impacts, is increasingly outdated.

This is not to deny that traffic congestion is a problem, but comprehensive and objective evaluation is required to identify truly optimal solutions, considering all goals and impacts. For more information see "Congestion Costing Critique: Critical Evaluation of the 'Urban Mobility Report'" [pdf] and other publications listed below.

Bruce Schaller (2019), What Urban Sprawl Is Really Doing to Your Commute. Urban Traffic Congestion is Growing Dramatically, According to a New Report. So Why Aren’t Drivers Taking Longer to get to Work?, City Lab.

TC (2006), The Cost of Urban Congestion in Canada, Transport Canada.