Today the Texas Transportation Institute released the 2015 Urban Mobility Scorecard, an annual report that measures the intensity of traffic congestion in 370 U.S. cities. As with previous editions, it claims that cities suffer "gridlock" which causes "traveller misery," and the problem will become much more serve in the future unless cities apply an "'all-hands-on-deck' approach." Hold the hyperbole, please!

As in previous editions, the report is structured to exaggerate congestion problems and understate the potential benefits of alternative modes and smart growth policies, as described in my previous blog, "Critiquing the Urban Mobility Report."

TTI's method only measures congestion intensity, that is, the reduction in vehicle traffic speeds during peak period, rather than per capita congestion costs, which is the more appropriate impact to consider for planning purposes. It fails to account for commute mode share (the portion of peak-period trips made by automobile) and average automobile commute trip length, so it fails to account for the congestion avoided when commuters shift mode or live closer to their work. As a result, the report ranks transit-oriented cities such as Washington, D.C., San Francisco, New York, and Boston worse than automobile-oriented cities such as Houston, Dallas, and Atlanta, ignoring the much lower per-commuter congestion delays in the compact, multimodal cities, as illustrated below.

The Urban Mobility Report’s title is inaccurate: it should be renamed the Traffic Congestion Report, because it ignores other modes and other urban transport performance factors such as affordability, safety, and local economic development.

The report is biased in various ways: 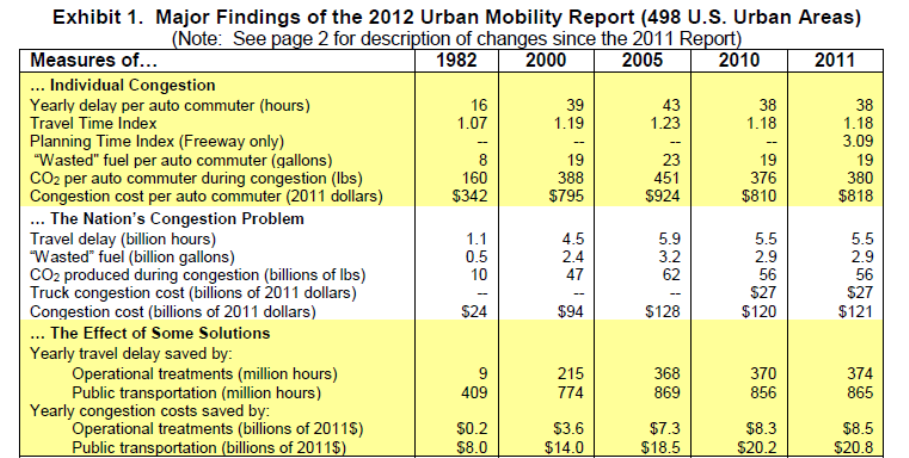 Questioning Congestion Costs: What’s the Real Cost of Congestion?, and Boo! The Annual Carmaggedon Scare is Upon Us, City Observatory.

The Texas Transportation Institute's latest Urban Mobility Scorecard claims, that "TRAFFIC GRIDLOCK SETS NEW RECORDS FOR TRAVELER MISERY." This critique by the Frontier Group puts their hyperbole into perspective. No need to panic!