The Surprising Region with the Nation's Worst Particulate Air Pollution

Reporting from North Pole, Alaska, "one of the coldest parts of the coldest state," Kirk Johnson of The New York Times describes "an only-in-Alaska pollution story: At about minus 20 Fahrenheit — a fairly regular occurrence here in winter — smoke that goes up comes right back down, to linger at ground level and, therefore, lung level."

The average from 2013 to 2015 for dangerous small-particle pollution, called PM 2.5, which can be deeply inhaled into the lungs, was by far the highest** in the nation in North Pole, just southeast of Fairbanks, according to the federal Environmental Protection Agency.

“It’s all one thing — when you most need the heat is when you’re most apt to create a serious air pollution problem for yourself and the people in your community,” said Tim Hamlin, the director of the office of air and waste at the E.P.A.’s Region 10, which includes Alaska [and Washington, Oregon and Idaho].

A major political conflict between the freedom to use one's wood stove, regardless of its efficiency, viewed by proponents as "freedom," and the desire for healthy air is being played out in Fairbanks North Star Borough (FNSB), an area slightly smaller than New Jersey with a population of nearly 100,000. Fairbanks is the borough seat. It includes the small city of North Pole as well as other suburbs of Fairbanks. 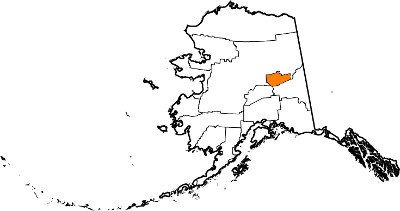 Courtesy of the Alaska Department of Environmental Conservation, Division of Air Quality

And it looks like tensions will mount as civil fines by the borough government "could be assessed in coming days against residential polluters," adds Johnson.

The E.P.A. could declare the entire area to be in “serious” noncompliance of the Clean Air Act early next year, with potentially huge economic implications, including a cutoff of federal transportation funds.

Air quality activist Dr. Jeanne Olson, a veterinarian, charges that the government "has been endangering public health by dragging its feet," writes Johnson.

For six consecutive days in mid-December, the air here was declared “unhealthy,” for high particulate content — the longest streak since the current monitoring system began in late 2015, according to the borough’s air quality division.

But stricter regulations for wood burning, notwithstanding the borough government's "reimbursement incentive for replacing, removing or repairing" wood stoves, will not go over well.

People up here tend to be more independent,” said Lance Roberts, a member of the Borough Assembly. “They came up here to get away from the regulatory environment that’s down in the lower 48, so they definitely see the E.P.A. as coming after wood stoves and trying to cut out that kind of independent lifestyle where you can live off the grid.”

Mr. Hamlin, the E.P.A. official, said his agency was definitely not trying to take away anyone’s wood stove, or make life more expensive. But he said the Clean Air Act, passed by Congress in 1970, requires a standard of breathable air for all Americans. The E.P.A. was given the job of enforcing that standard.

**Footnote: For the record, the 2016 'State of the Air' Report by the American Lung Association lists the "Top 10 U.S. Cities Most Polluted by Short-Term Particle Pollution (24-hour PM2.5)". So, if you thought "Central Valley" to the initial question, you wouldn't have been wrong according to the association.