The Only Remaining Nuclear Power Plant in California Will Close

In a surprise announcement by Pacific Gas and Electric Company on Tuesday, it was learned that California's only remaining nuclear power plant, Diablo Canyon in San Luis Obispo County along California's central coast, will close in nine years. "In a momentous decision with far-reaching consequences, Pacific Gas and Electric Co. has announced it will not pursue license renewal for the two reactors at Diablo Canyon nuclear power plant and will close it in 2025 — ending a tumultuous 31-year relationship with the community and causing an annual economic impact of nearly $1 billion locally," writes David Sneed for The Tribune.

The closure is part of an agreement with labor and environmental organizations announced Tuesday [June 21] in which the utility agrees to increase investment in energy efficiency, renewable power and electricity storage to offset the power that will no longer be produced by the nuclear plant.

According to PG&E's press release, the organizations are the International Brotherhood of Electrical Workers Local 1245, Coalition of California Utility Employees, Friends of the Earth, Natural Resources Defense Council (NRDC), Environment California, and Alliance for Nuclear Responsibility.

However, at least one environmental organization had wished the PG&E had pursued license renewals for their nuclear reactors."Nuclear is just a huge part of moving towards a cleaner electrical system," says Michael Shellenberger, president and founder of Environmental Progress, which supports nuclear power, writes Lauren Sommer, KQED Science reporter.

“You cannot power the world on wind and solar,” says Shellenberger. 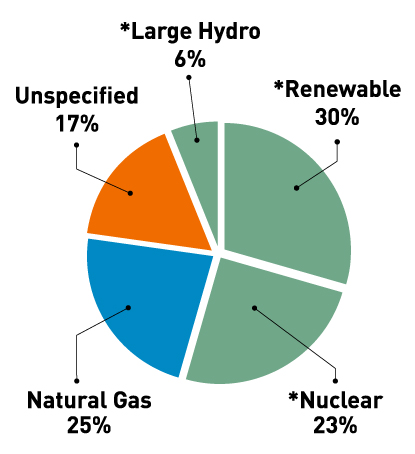 * These resources are greenhouse gas-free and/or renewable.

Note: Power mix includes all PG&E-owned generation plus PG&E’s power purchases. Due to rounding conventions, the numbers above may not add up to 100%. Data is sourced from PG&E’s 10K report, filed in February 2016.

That position would appear to be confirmed by PG&E Chairman Tony Earley.

"California’s energy landscape is changing dramatically with energy efficiency, renewable and storage being central to the state’s energy policy," said Earley in the press release. "As we make this transition, Diablo Canyon’s full output will no longer be required."

However, as the above pie chart indicates, last year nuclear power represented almost one quarter of the utility's energy portfolio. It will take a lot of renewables, efficiency, and storage to fill that void.