The Geography of Occupations: Some Neighborhoods Will Suffer More Than Others Under COVID-19

Census Bureau data shows we live near people with similar occupations, and right now frontline jobs are riskier for both health and economic well-being than working from home. The first U.S. cases of COVID-19 occurred in circles of the well traveled. People visited then-affected countries or took a cruise during which they contracted the virus, and in some cases passed it on to their family, friends, or coworkers. Yet for many Americans a vacation is sometimes not an option and business travel is a laughable notion. Would COVID-19 then be a disease that largely affects the spaces of the wealthy and privileged? The  latest data from New York City's five boroughs suggests that in hard-hit cities it will not be. Rather, it will deal more harm to less wealthy communities, which matters to how we respond and recover. There are many reasons why to consider, such as household size and density, but a key one is that we tend to live near people with similar occupations and incomes, and under community spread and lockdown, some jobs are riskier than others for both health and economic wellbeing. To illustrate this unequal risk, I consider COVID-19 in light of 2018 American Community Survey data for New York City's five boroughs.

Occupations matter to both health and economic well-being, especially in this moment. Firstly, some occupations are riskier in terms of possible exposure to COVID-19. Healthcare workers are, of course, on the front lines, and we know that in China at least  3,000 doctors and nurses became infected and 18 died. This concern for healthcare workers should extend beyond hospitals, to encompass clinics, nursing homes, and doctor's offices. But also consider the heightened exposure of retail, maintenance, protection, food service, and transportation workers as they deliver food, clean the spaces we still share, and keep buses and trains running. Beyond their own elevated risk is the risk of exposing family and neighbors. Secondly, some of these same occupations have greater risk of economic loss. Many healthcare workers are secure in their employment, while others are now facing cuts or reductions in hours. Many food service workers have also found themselves suddenly unemployed as restaurants shutter. While transit systems run on reduced schedules,  demand for ride-share has plummeted and the remaining requests  may expose workers to infection. Finally, many households have canceled their routine cleaning services, affecting undocumented workers. New York City has also canceled much construction work, even as work deemed essential continues. Compare these risks to those of us who can continue our work from home through the Internet. In doing so, we are supported by remaining frontline workers who often travel to neighborhoods beyond their own for work.

Occupations are segregated by neighborhood, which means these occupational health risks and economic losses are not borne equally by neighborhoods in America’s divided cities. Looking at zip codes in New York City illustrates how our neighborhoods are segregated by occupation. Data on the prevalence of several higher risk occupations shows that in the 51 majority-wealthy neighborhoods, these workers are scarce — making up less than 1 in 10 working residents. But in middle income and lower income neighborhoods, these workers are much more prominent — making up more than 1 in 3 residents in areas where more than 70% of households earn less than $75,000 dollars per year. Meanwhile in the majority-wealthy neighborhoods, more residents can work from home and remain employed in management and professional jobs, which are far more prevalent there. Comparing the spatial distribution of the case data from the NYC Department of Health and Mental Hygiene with such occupations, reveals that zip codes in which more workers are likely to be working from home have less positive test results. While the lack of more widespread testing makes the COVID-19 case data imperfect, it is becoming clearer with each release that neighborhood differences exist. Not only does the disparity in occupation mean greater risk of exposure to COVID-19 for these workers and their household members, it also means that income is more secure in wealthier neighborhoods since such jobs are less likely to be terminated. 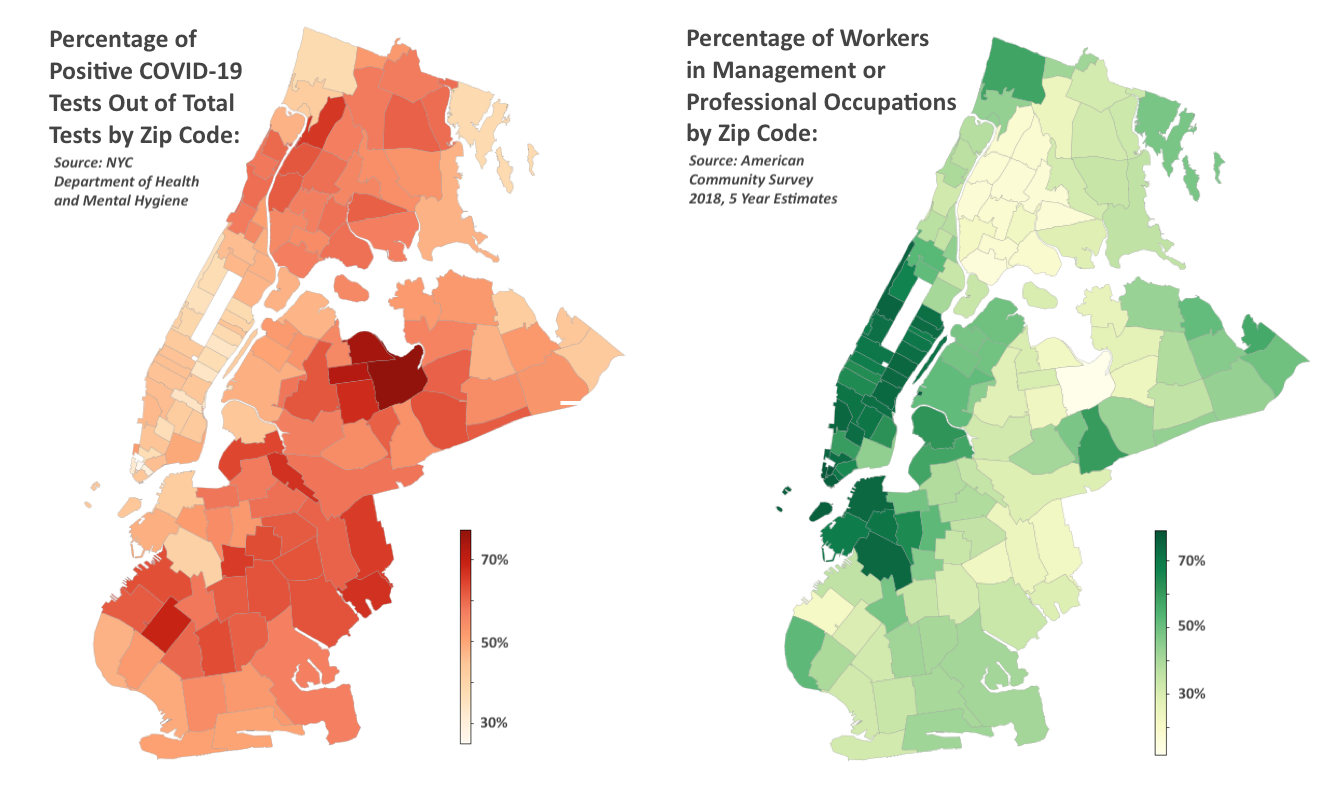 Segregation by income and race is the fabric of most American cities. In Ohio, where I am a postdoctoral researcher at The Ohio State University’s STEAM Factory, the city of Cleveland is just one example of such a divided community, but we have many more in the country. Even though COVID-19 won't see the hyper-local clustering of a waterborne pathogen like cholera, space and place will matter to both its spread and impacts, and in the United States those will be shaped — as so many things are — by inequality. There are other reasons why lower income neighborhoods will suffer greater impacts, such as existing healthcare disparities and differing resources to fall back on, but occupation is a reason that uniquely fits this crisis. It will interact with other factors such as density and travel mode to play a role in the ongoing crisis. More localized data will be needed in more cities to identify neighborhood clusters, such as that now being provided by the L.A. County Department of Public Health and New York City for their regions. The federal stimulus will bring some relief to the economic hardship of those no longer working, but what about their neighborhoods? Both in immediate response and in recovery, local policymakers and planners will need to be advocates for targeting some support at the community level, such as to local organizations that can help the hardest hit neighborhoods get back on their feet.

Jonathan Stiles is a postdoctoral researcher at The Ohio State University. He can found on Twitter and at http://jonathanstiles.net.