In a recent blog, White House Economist Links Land Use Regulations: Housing Affordability and Inequality, Wendell Cox supports Smart Growth policies, although it is unclear whether he realizes this.

Cox bases his blog on an Urban Institute presentation by Jason Furman, Chair of the White House Council of Economic Advisers, titled, Barriers to Shared Growth: The Case of Land Use Regulation and Economic Rents, which highlights ways that, by limiting the supply of affordable urban infill, zoning codes reduce housing development, affordability and economic opportunity in attractive, economically-successful cities.

Cox is a vocal Smart Growth critic, often using what I believe is inaccurate evidence to argue that urban containment regulations are the primary cause of housing unaffordability, but Furman's presentation clearly indicates that zoning codes that discourage urban infill (e.g., minimum lot size, restrictions on building density and height, limits on multi-family housing, minimum parking requirements, and excessive development fees) are the primary factor driving up housing prices and reducing affordability in economically successful cities. As a result, Cox essentially endorses Smart Growth policies that reduce such regulations, although his blog fails to acknowledge this point.

Furman cites several studies that quantify these effects, such as Hsieh and Moretti's recent study, Why Do Cities Matter? Local Growth and Aggregate Growth, which estimates that zoning restrictions in New York, San Francisco, and San Jose reduce national economic productivity by 9.5 percent, or about $2 trillion; they also recommend that cities invest in high quality public transit, which Cox has frequently criticized. Furman cites Gyourko, Saiz, and Summers's study, A New Measure of the Local Regulatory Environment for Housing Markets: The Wharton Residential Land Use Regulatory Index (WRLURI), which quantifies land use regulations, almost all of which limit urban infill, and their tendency to increase housing prices (see table below). He cites Edward L. Glaeser and Bruce A. Ward's study, The Causes And Consequences Of Land Use Regulation: Evidence From Greater Boston, which shows that there is no overall shortage of urban land; rather, housing prices are driven up by restrictions on infill in attractive cities and suburbs. Furman also points out that changing consumer preferences are shifting demand toward more compact housing types and more multi-modal neighborhoods.

The Wharton Residential Land Use Regulatory Index includes many components, most of which reflect pro-sprawl restrictions on compact infill development. Studies show that such restrictions tend to increase housing costs.

For example, Cox claims that sprawled cities, such as Phoenix, Houston, and Miami, are affordable due to their liberal land policies, and compact cities such as Boston, Seattle, and San Francisco are unaffordable due to their urban containment regulations, but that argument overlooks two key points. First, the cities he criticizes as unaffordable are all very attractive, economically successful, and geographically constrained, so their land is naturally scarce and expensive. Because such cities are limited in their ability to expand outward, housing affordability requires that they build upward by allowing higher density infill.

Second, cities' affordability rankings tend to reverse if transportation expenses are considered as well as housing expenses, as illustrated below. Cox's analysis is incomplete and biased because it considers housing costs alone, and so fails to recognize the much higher transport costs in sprawled locations.

The compact regions that Cox criticizes as unaffordable, such as Boston, Seattle and San Francisco, have lower total housing and transport expenses than the sprawled regions he advocates, such as Phoenix, Houston and Miami, because their higher housing costs are more than offset by cheaper transport. (Consumer Expenditure Survey)

The data also contradict Cox's claim that pro-sprawl policies increase economic opportunity. Using data from the Equality of Opportunity Project, Ewing and Hamidi found that each 10 percent increase in their Smart Growth index is associated with a 4.1 percent increase in residents' upward mobility (the probability a child born in the lowest income quintile reaches the top quintile by age 30). In fact, the sprawled urban regions that Cox cites as examples to be emulated, such as Pittsburgh, Atlanta, Columbus, and Dallas, have far lower average incomes and higher poverty rates than the U.S. average, while the cities that he criticizes for their Smart Growth policies are very economically successful. Of course, many other factors besides local development policies may help explain these outcomes, but this certainly contradicts claims that low-density, automobile-dependent development increases productivity and opportunity. Described differently, Cox's prescription for housing affordability is to encourage poverty. 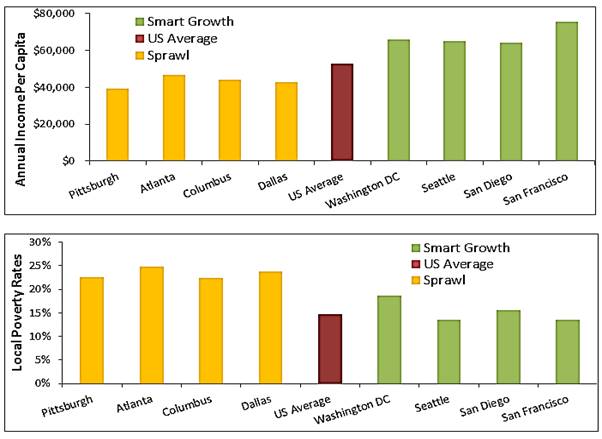 The sprawled urban regions that Cox cites as examples to be emulated have far lower average incomes and higher poverty rates than the U.S. average, while the cities that he criticizes for their Smart Growth policies are very economically successful.

Despite low urban densities, high automobile ownership, low fuel prices, and generous mortgage tax deductions, the United States has lower home ownership rates than peer countries: 65 percent of U.S. housing is owner-occupied, compared with 67 percent in Australia, 68 percent in Canada, and 70 percent for the European Union average. In addition, 45 percent of U.S. houses have a mortgage, compared with just 27 percent in the European Union, further indicating that sprawl-based policies that encourage lower-density urban-fringe development fail to increase home ownership. The major difference between the United States and other democracies is that a larger portion of Americans live in detached houses in lower-density, automobile-dependent neighborhoods, while other countries have more compact housing (e.g., rowhouses and multi-family) located in multi-modal neighborhoods, which tends to be more affordable overall, considering both housing and transport expenses.

Why do Americans live in larger but less affordable homes which lead to lower home ownership rates? Hirt argues that this results from restrictive policies such as zoning codes that prohibit more compact housing types on most urban residential land. According to her analysis, the overwhelming majority of residential land is reserved for single-family houses, and no U.S. city in which more than 3 percent of the land is zoned for mixed use. These regulations are far more restrictive than in European cities. For example, most of Paris has "General Urban" zoning which allows "a startling variety of establishments, including houses, apartment buildings, shops, restaurants, cafes and offices."

The differences are equally stark when comparing communities within the United States, as discussed in my report. The compact regions that Cox criticizes as unaffordable, such as Boston, Seattle, and San Francisco, have lower total housing and transport expenses than the sprawled regions he cites as desirable examples, such as Phoenix, Houston, and Miami, because their higher housing costs are more than offset by cheaper transport. The sprawled regions also have significantly lower average incomes, higher poverty rates, lower education attainment, higher housing foreclosure rates, and less economic mobility than the compact regions he criticizes.

This makes sense because, compared with compact and multi-modal development, sprawl is more resource-intensive: it increases per capita land consumption, by dispersing destinations it increases the costs of providing public infrastructure and services, by reducing travel options it increases per capita motor vehicle travel and associated costs, and by reducing accessibility for non-drivers it reduces affordability and economic opportunity for physically and economically disadvantaged people. Those additional costs and barriers are inefficient and unfair.

This has important policy implications. Cox argues that the solution to high housing prices and low economic opportunity is simply more of the last century's pro-sprawl and pro-automobile policies: more urban expansion, more home ownership subsidies, lower vehicle ownership fees and fuel taxes, but he offers no evidence that such policies can really achieve their goals. On the contrary, both theoretical and empirical evidence indicate that pro-sprawl exacerbate these problems, and that Smart Growth policy reforms help solve them.

There is now good recent evidence that Smart Growth policies can increase housing affordability: According to a recent Puget Sound Business Journal article, Bad Timing: As Thousands Of New Apartments Open, Seattle's Rental Market Weakens, the large number of new, primarily multi-family housing units being developed in Seattle (7,400 in 2014, and 22,000 in 2015) are significantly reducing rents in one of North America's most attractive and economically successful cities. The article reflects the developers' perspective and so describes this as an undesirable threat, but this is good news for moderate-income households that want to live in Seattle and for businesses that depend on moderate-wage workers. Similarly, although Cox has criticized Vancouver, BC for its rising housing costs, this is only true of single-family housing, attached (townhouse) and multi-family housing prices have hardly increased, indicating that the city's policies to encourage compact development are at least partly successful at maintaining housing affordability, and are very successful at achieving other planning objectives such as transportation affordability and traffic safety. This and other research show that zoning code reforms that allow more compact, infill development can increase housing affordability and reducing homelessness.

Vancouver region single-family housing prices increased significantly during the last five years, but townhouse and apartment prices have been flat.