This vehicle would be larger than a Hummer, a bus, and even an 18-wheeler. Then again, it would not travel on land. The proposal goes by an appropriate acronym: SF-BREEZE. Think fresh air over the bay.
August 3, 2015, 1pm PDT | Irvin Dawid
Share Tweet LinkedIn Email Comments

San Francisco Bay may have fewer ferries operating than Puget Sound in Washington State, but if the BREEZE proposal comes to fruition, it will have the greenest. 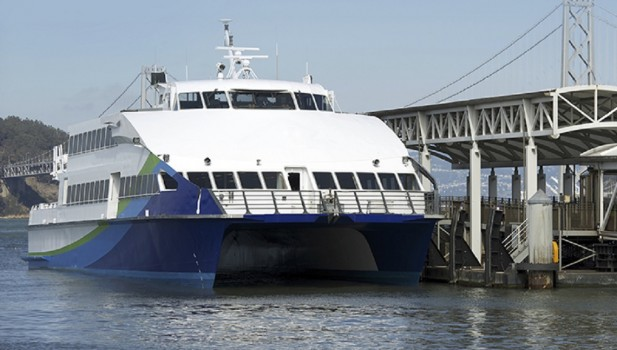 The concept behind the San Francisco Bay Renewable Energy Electric vessel with Zero Emissions (SF-BREEZE) is "to design, build, and operate a high-speed hydrogen fuel cell passenger ferry and hydrogen refueling station," according to Sandia National Laboratory, which is operated for the U.S. Department of Energy’s National Nuclear Security Administration.

This undertaking is by Sandia's Energy & Climate division. It signed an agreement with Red and White Fleet, a cruise tour operator in San Francisco Bay, to work toward eliminating smokestack emissions.

The proposal received a grant from the U.S. Department of Transportation's Maritime Administration (MARAD) for half a million dollars toward "a feasibility study of a high-speed passenger ferry with a hydrogen fuel cell, and of a hydrogen refueling station that would service the ferry, [fuel cell] electric cars, buses, fleet vehicles and other fuel cell-powered marine vessels," writes AASHTO Journal. "(T)he multi-use hydrogen refueling station would be the largest in the world."

"This study is just one more way in which MARAD is working to find new and efficient technologies for use in the maritime industry that offer clean-fuel options to cut emissions," said Administrator Paul 'Chip' Jaenichen.

A fuel cell powered ferry would consume as much hydrogen fuel in one day as 200 cars would in one week, according to Environmental News Service.

"If the feasibility study indicates that SF-BREEZE could succeed technically, economically and within regulations, the next step is to design the vessel," according to Sandia's press release. "The project will need additional funding, resources and partners, which could come from the federal government, the state of California, investors, industry or private foundations."

On the East Coast, "MARAD is also funding an effort to demonstrate a fuel cell for ship auxiliary power for its school ship Kennedy, which is used by Massachusetts Maritime Academy as a training vessel."

Correspondent's notes: Fuel cell vehicles are a type of electric vehicles. As for the "renewable" part of the acronym, look for a 'comment' below the post if I find out.