Second Largest Bikeshare in U.S. will be Bay Area's by 2017

Bay Area Bike Share will grow from 700 to 7,000 bikes by 2017 after the expansion proposal was approved by a unanimous vote of the Metropolitan Transportation Commission. It is a regional, not a city program, though most usage is in San Francisco.

The new operator of Bay Area Bike Share is Motivate, previously known as Alta Bicycle Share, which also operates the nation's largest bikeshare program, Citi Bike. "At a press conference following the [May 27] Commission action, Motivate unveiled the next generation of bike share bicycles [pictured below], which are specially built to withstand the elements and heavy use on all terrains," writes Brenda Kahn, Senior Public Information Officer at the Metropolitan Transportation Commission (MTC). 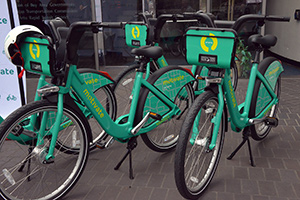 With the Commission's approval, the program now expands to the three East Bay cities of Oakland, Berkeley, and Emeryville. What was uncertain prior to the May 27 Commission meeting was whether it would remain in the three Peninsula cities where usage rates have been low.

Three West Bay cities that were part of the original pilot program but not included in Motivate’s expansion plans — Redwood City, Mountain View and Palo Alto — have the option to continue to participate under separate agreements with Motivate [although they can remain at no cost through June 2016.]

"Other cities in the region that want to participate in the regional bike share system can develop a service agreement with Motivate using their own sources of funds, according to a preset price, with the ability to secure sponsorships to cover the costs," writes Kahn, although "MTC is committing $4.5 million for capital costs" for expansion in those cities.

Under the public/private arrangement, the 7,000 bike program will operate with no financial support from the public sector, relying instead on member/use fees and [corporate] sponsorships.

Presumably the corporate sponsorships will allow for advertising on the bikes and the docking stations, as noted earlier. Currently neither have ads.

Wary of the demographic factors that show low income, nonwhite commuters are less likely to use bike share, Motivate will have a reduced membership fee for those who qualify.

An annual pass for Bike Share will start at no more than $149, with future adjustments pegged to inflation. Low income Bay Area residents will be eligible to purchase an annual pass at just 40 percent of the standard rate. Also in the area of equity, Motivate is required to place a minimum of 20 percent of its docks and bikes in communities of concern.

With the approval of the new contract, "(o)verall management of the program will transfer from the Bay Area Air Quality Management District to MTC," writes Kahn. So ends what must be considered a successful pilot project that was launched in August, 2013.

Wednesday, May 27, 2015 in Metropolitan Transportation Commission

The regional system would expand to the the East Bay cities of Berkeley, Oakland and Emeryville. Bikes would be added in San Jose and San Francisco.

Palo Alto may be one of America's most bike-friendly small cities, but when it comes to bikeshare, it's been a flop. It's not alone—ridership has been low in Mountain View and Redwood City as well.