How Many Bicycles Can Park In The Space Required By One Car? Don’t Ask PolitiFact.

PolitiFact holds politicians accountable for their claims, but how accountable is PolitiFact? Not very. It inaccurately answered a simple planning question, and was unwilling to clarify or correct its false judgment.

PolitiFact is a network of news organizations which evaluates the accuracy of political statements using a Truth-O-Meter rating system. It’s a good idea to hold politicians accountable for their claims, provided the analysis is accurate and fair. Unfortunately, PolitiFact is careless and unresponsive to criticism. 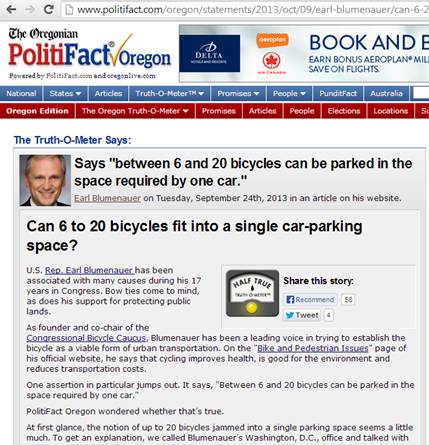 Based on a few phone calls, Tims concluded that a 10- by 20-foot bike corral can hold 12 bikes maximum. He was off-track; the question being tested is the number of bicycles that can park "in the space required by one car," not in a bike corral. His analysis ignores the fact that most parking spaces are in off-street parking lots and garages which require driveways and access lanes, and sometimes include landscaping, which approximately doubles the area required per vehicle. Here is the key quote from my report:

Blumenauer’s statement is clearly true: up to 20 bikes can usually fit into the total space typically required to park one car. PolitiFact’s conclusion that Blumenauer’s (and my) estimate is only half true is inaccurate and unfair.

A few days after it was posted I sent a polite email to Tims explaining the distinction between on- and off-street parking, and asked him to correct the error by either changing the conclusion to “True,” or adding a clarification that the column’s conclusion only applies to on-street parking. It took three subsequent requests and a week to get a reply. Tims simply retrenched. He replied:

Our PolitiFact Oregon piece clearly talked about bicycle corrals and other urban features that allow bicycles to be parked out in the open along city streets. As such, fixtures such as double-decked racks or other features don't work, since these (as my piece noted) are not allowed for under the city of Portland's transportation planning code. I think the piece is amply clear that we are talking about building-front areas on public streets -- not tucked away nooks or other spaces. As such, we stand by our Half True ruling that, yes, 12 bicycles can be safely parked and locked in the specific areas we are talking about, but that 20 cannot.

Tims' position defines logic and fairness because the question he answers is not the question he originally asked. At issue is the number of bicycles that “can be parked in the space required by one car,” which is typically 300-350 square feet, but he only analyzes the number of bikes that can be parked in a 150 square feet bike corral, such as the one illustrated below. 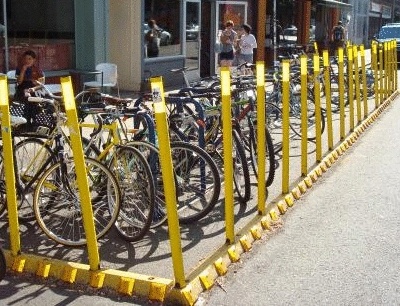 As a reporter, he is not expected to be a parking expert, so he may not have appreciated the distinction between on- and off-street parking when he began research, but he is expected to actually read the source material - my report - which explains how I calculated that up to 20 bikes can fit into the space required for one car.

I then tried to persuade Tims' editor, Michelle Brence. She too defended the column, stating,

It's clear to me from the context that we were talking about streetside parking. But even if we weren't, it's abundantly clear that we were talking literally about the space of one parking space -- and not any attendant space for driveways, landscaping, etc. We even defined the space we were talking about as 20 feet by about 10 feet. I also think very few people, especially outside planning circles, would think to include such ancillary space when thinking about how many bikes could fit inside a parking space. To me, it's like asking how many people could fit inside a given house and arguing that a regular person would think to include the five-foot setbacks required to build the house. Also, neither Rep. Blumenauer nor anyone from his office took exception to our ruling or reasoning.

I looked at the report and I didn't see anything that wasn't factually accurate. In addition, the report seemed very thorough. I appreciate that you disagree with the rating, but at the end of the day, the rating is the judgment of the editors.

These responses indicate that the PolitiFact organization has little interest in helping their readers understand complex issues. It is news as sport rather than education. They showed no interest in making the column more accurate and fair by explaining the difference between on- and off-street parking facilities, and admitting that the statement would be "True" for the majority of car parking. Most readers will simply look at the Truth-o-Meter rating, few will understand that the conclusion only applies to a subset of total car parking.

This is an example of dumbing down journalism, the assumption that popular opinion is more accurate than expert knowledge, and that news can be generated with minimal research. To call Tims’ column “very thorough” indicates low journalistic standards: it was based on just a few phone calls and little effort to understand the issue. He failed to read the source material. Newspaper reporters are under tremendous pressure these days due to declining advertising revenue and competition from partisan websites that care little about truth, but that is no excuse; journalists have a professional responsibility to be accurate and fair, and to correct inaccuracies.

This issue is important because it is part of a growing debate over the value to society of shifts from automobile to alternative modes. Parking cost savings are among the largest potential benefits. Bicycles require parking facilities, but these are much cheaper than automobile parking. Tims’ column underestimates these saving; that type of analysis can lead to underinvestment in cycling  programs. It also tarnishes the reputations of Representative Blumenauer and other bicycle advocates, and my research.

Truth-O-Meter is a powerful tool but harmful if applied carelessly. Journalists have an obligation to insure that their statements are clear, correct and fair. The Oregonian’s unwillingness to clarify and correct this inaccuracy shows a lack of professional integrity.

The city’s efforts to reduce driving and parking downtown by raising parking fees and ticket fines seem to have little effect on driving habits.

1 hour ago - The Lancet - Urban Design, Transport, and Health