Next month's World Cup in South Africa will bring a lot of attention to the country, and a lot of opportunity. Though many hope the country will see an economic benefit, the biggest impact is likely to be the creation of urban infrastructure.
May 10, 2010, 5am PDT | Nate Berg
Share Tweet LinkedIn Email Comments

In one month, the world's most popular sporting event will begin, drawing billions of spectators to screens all over the planet. In another month, it'll all be over.

The FIFA World Cup is, by its nature, a nationalistic event. Every four years, 32 teams representing their home countries play in a month-long tournament to determine which is the best soccer-playing nation in the world. Birthplace and heritage divvy up the fans. But this year's tournament has a different sort of nationalism pumping the blood of the event. For host nation South Africa, the 2010 World Cup is about much more than a simple game or international athletic superiority. South Africa's World Cup is about the future of South Africa itself. 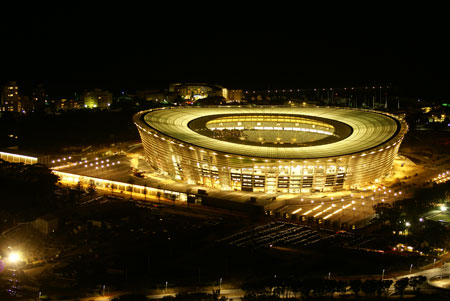 For South Africa, the World Cup has the potential to leave a lasting legacy of improvements in two crucial areas: its international reputation and its urban infrastructure.

Recovering from 49 years of the violent and deeply discriminatory apartheid regime of the last half of the 20th Century, South Africa is a new democracy eager to move beyond its unfortunate past. It's the first African nation to host the World Cup. Its ability to pull off the event has been questioned consistently since its selection as host in 2004. With crippling poverty, widespread unemployment, drastically high rates of crime and very real aftershocks of its transition to a non-segregated state, South Africa could use some positive PR. The country is hoping that the international spotlight will shine a friendly light on how far the country has come, and maybe not so brightly on how far it needs to go.

"The cup is a tremendous opportunity for Africa to show how, out of the headlines, it has changed for the better," writes former United Nations Secretary-General Kofi Annan in a recent op-ed for the Guardian. But nobody is kidding themselves; South Africa does indeed have much room for improvement. One of the direct ways the World Cup is driving towards some of those goals is through the creation of hard, nuts-and-bolts infrastructure within the nine host cities. Updated ports, expanded public transit systems, revamped roads – the World Cup is essentially an excuse for vast public works projects.

New airports and expanded terminals have opened in Johannesburg, Durban and Cape Town. Bus rapid transit systems are under construction in cities across the country, most notably the Rea Vaya in Johannesburg. The first segment of the Gautrain regional rail system in the Johannesburg area is set to open June 8, meeting its deadline to open before the Cup's opening match on June 11. Major road projects are being undertaken in every host city, updating access and circulation. New train stations have also opened in many host cities. The National Treasury has invested more than $2.1 billion on transportation and infrastructure projects, in addition to local funding sources. Transportation will be the main legacy of the World Cup, according to South African Minister of Transport Sibusiso Ndebele. 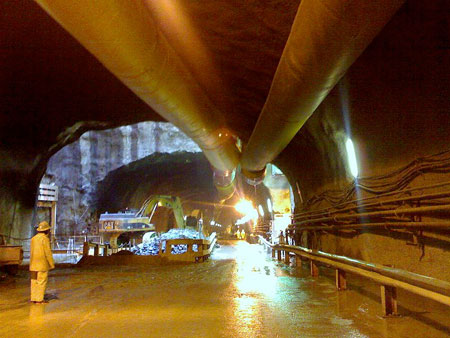 But even with all this in the works, buildout of that transportation legacy has not been an entirely smooth process. Projects have gone vastly over budget, past deadline and beyond feasibility. The cost of Cape Town's BRT system ballooned from an estimated $171 million in 2008 to more than $600 million. It was recently announced that one section of the Johannesburg Rea Vaya bus rapid transit system would not be ready in time for the tournament as had previously been planned. Benchmarks for the Gautrain have been scaled back. Planned BRT systems have been delayed or called off in Durban, Bloemfontein and Tshwane.

These troubles highlight some of the problems with South African transit in general. Most cities are dominated by cars and minibus taxis. As a result, the cities are often congested and hectic with car traffic. Unsafe drivers are a constant menace on South African roads, where crashes claim thousands of lives every year. And for the rail systems that do currently exist, underinvestment and aging infrastructure have some concerned that the entire passenger rail system could collapse within a decade.

Public space in South Africa also stands to benefit as a result of the World Cup. Like previous World Cup host Germany, South Africa's host cities are creating fan parks during the tournament where the public can view games on big screens. A new concept first tested during the 2006 World Cup, these public viewing areas are seen as a way of spreading the event beyond the edges of the stadia and opening the games up to those who can't afford tickets for the matches. Each of the nine host cities has a public viewing area planned, as do a handful of other cities.

Though most of these venues will be temporary establishments during the event, there are some examples of permanent improvements to the public realm. One example is in the city of Cape Town, where planners have turned the public space surrounding the city's World Cup stadium into a huge urban park. 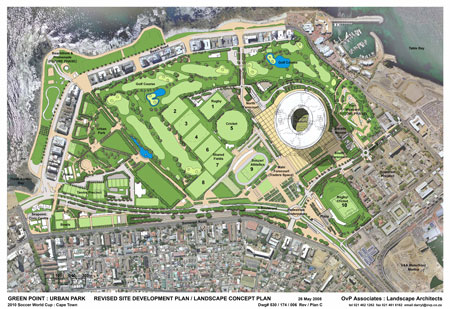 The master plan for the urban park around Green Point, site of the new Cape Town Stadium. Image courtesy City of Cape Town.

But recognizing that actually getting to that park could be difficult for the poorest of this city's 3.5 million people, officials have also taken advantage of the World Cup as an economic engine to build a series of public spaces in some of the less advantaged parts of the city. Officials are building 23 new public parks and community facilities all over town. Not directly related to the World Cup events per se, this program uses the event as a springboard to invest in the creation of much-needed public spaces within underserved sections of the city. 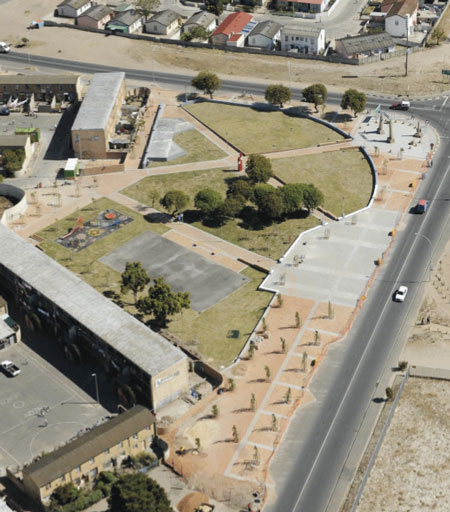 "The popular belief that this World Cup and the infrastructure associated with the stadium will, of necessity, yield a benefit to the public and leave a legacy that will have meaning for the poor is a bit of a pipe dream," said Cedric Daniels, manager of the Urban Design Branch of the Cape Town Planning Department. He says the city wanted to use the World Cup to edge in some public projects aimed at helping the city's poor, but which it hadn't previously had the opportunity to do.

The city's Quality Public Space program is building amenities like playing fields, community centers, and public plazas. Daniels says these facilities are likely to have a bigger impact on the city's poor population than the spaces created specifically for the World Cup, 8 games of which will take place in Cape Town. 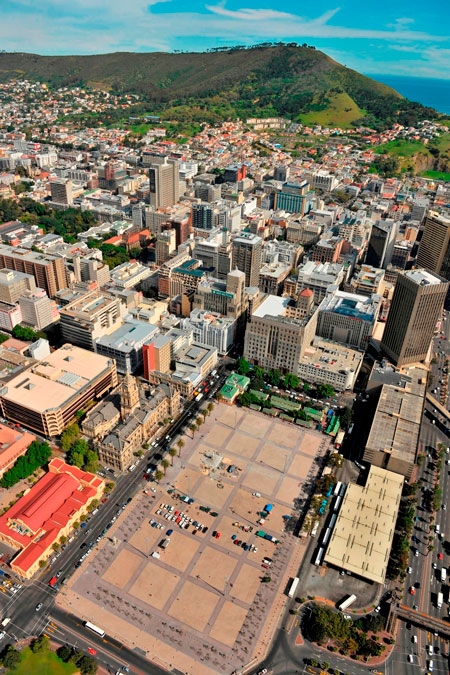 The World Cup, however, probably won't live up to the high economic expectations of many in the country. Originally expected to draw more than half a million foreign visitors, new predictions suggest only about 373,000 tourists will visit South Africa during the Cup. A recent report from the Human Sciences Research Council suggests a small likelihood of South Africa seeing an appreciable increase to its GDP as a result of the World Cup. Despite the International Monetary Fund's recent projection that South Africa's economy would experience a 2.6% jump in 2010, another study by the auditing firm Grant Thornton shows that nearly two-thirds of the economic impact from the World Cup actually occurred before 2010, before the event even happened. Most of that economic impact is a result of the government's investment in infrastructure, according to the report.

However, a recently released book questions how some of those government investments have been made. "Player and Referee: Conflicting Interests and the 2010 FIFA World Cup" (PDF) is a collection of investigations into the government's spending ahead of the World Cup, its dealings with FIFA officials, and possible instances of corruption. The book's allegations put a dark shadow over South Africa's World Cup and the nation's efforts to prove itself as a functioning democracy in the global market.

In total, more than $5.2 billion has been spent on World Cup preparations by the national government and the host cities. And while that investment is surely not the end-solution to the infrastructural problems facing South Africa, it is likely to be a good start. And with the Department of Transport's recent proposal of a nearly $100 billion rapid transit plan to expand rail in the country's northeast, the ball appears to be rolling. But it remains to be seen how well that momentum will keep up and how able to South African government is to maintain these sorts of investments in improvements to it urban realm.

Nate Berg is a contributing editor at Planetizen. He is also editor of World Cup Planning, a news blog tracking urban planning news related to the World Cup and other international sporting events. He'll be in South Africa for the next three months reporting on the cities hosting the 2010 World Cup.