Arizona Water Rights No Longer 'Use it or Lose it'

The End of the Automobile Era?

On a recent Thursday in February, two disparate incidents in cities on opposite coasts may have signaled the end of the hundred-year ascendancy of automobiles in American life. In Portland, Oregon, the city council voted 5-0 to accept a new bike plan with the ambitious goal of increasing the percentage of people riding bikes from 6% (the highest of any big city in the country) to 25%. Three thousand miles away, on the opposite coast, the New York City Department of Transportation announced that they would make permanent the closing of Broadway to vehicle traffic.

At first sight, both incidents might not seem to have a lot in common, but they do represent highly visible examples of a dramatic shift sweeping America with regards to our attitudes about transportation and the proper role of transportation in making American cities prosper. Trendsetting cities around the country have realized for quite some time that it is not in their best interest to continue bending over backwards to accommodate cars – in fact these cities are going in the opposite direction and are actively seeking ways to accommodate walkers, bicyclists and transit users. The success of this approach shows in the rebirth over the last 10 years of cities like Washington and Chicago. And this new approach is no longer just a fad limited to the blue states – Oklahoma City and Little Rock are examples of red state capitals that are taking tentative steps to ensure a less car dependent and more vibrant future. 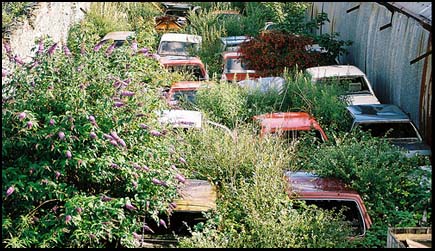 What these cities may not realize is that they could be riding the crest of a wave of change in our culture. The tentative signs of the end to the dominance of cars in American culture are showing up in a number of ways. For example, the number of vehicles per person in America peaked in 2001. In fact, this decade is the first since the automobile era began in 1900 that the number of vehicles per person was smaller at the end than at the beginning of the decade. Likewise, the number of miles driven in America for each man, woman and child peaked in 2004 – both of these peaks occurred long before we even dreamed of the current economic downturn which seems to have just accelerated the trends.

So what is going on? Well, for one there is a growing recognition by cities that we can no longer afford to expand or even simply maintain the massive highway infrastructure that they have accumulated over the last 60 years. And in fact, cities are learning that it is way cheaper to provide for bikers, walkers and transit users. The current bike infrastructure in Portland was built up over 15 years for $60 million. This puts in stark relief the fact that $60 million would buy us little more than one mile of freeway.

Second, cities need to be cool to succeed and it is hard to be cool when you're completely surrounded by the detritus of car culture – huge roads, parking lots and parking garages. Besides, younger citizens seem to be growing disillusioned with that car culture - a number of recent studies have found that young people in rich countries are buying cars at a much lower rate than their parents did at the same age. In some quarters, this is cause for panic – lower car purchase is almost always equated with economic stagnation. However, with oil prices staying stubbornly at $80 per barrel in the midst of perhaps the worst recession since the 1930s, we might not have a choice but to face up to the fact that we are entering a different era.

Just as the start of the automobile era created winners and losers, so too will a new post-automobile era. The question is whether or not we in the USA will wake up to this new reality in time to take advantage of the economic opportunities and needs of the new era -such as the need for American manufacturers of streetcars, for instance.

The really good news in this story is that this could be a transition to a time when the carnage from motor vehicle crashes will no longer be considered an accepted part of modern life. A time when our urban places will once more be designed for people and not be trashed to accommodate cars. And when the profligate burning for mobility of the earth's finite store of petroleum will be looked at as a quaint relic of the past. A past not unlike the one now regulated to the movies where people smoked in doctor's offices and on airplanes. A past that causes us to say: what were they thinking?

The signs are all pointing in the same direction; the post-car future may be much nearer than we think and we need to get serious about planning for it.

Norman Garrick, PhD is an associate professor of civil and environmental engineering and director of the Center for Transportation and Urban Planning at the University of Connecticut. He is also a board member of the Congress for the New Urbanism.

Arizona Water Rights No Longer 'Use it or Lose it'