Carjacked: The Culture of the Automobile and Its Effect on Our Lives

Planetizen talks with Anne Lutz Fernandez, author of the new book <em>Carjacked: The Culture of the Automobile and Its Effect on Our Lives,</em> about how Americans feel about their cars, the Starbucks Effect, and the built environment.
February 1, 2010, 9am PST | Tim Halbur
Share Tweet LinkedIn Email Comments

Sisters Catherine Lutz and Anne Lutz Fernandez are not planners- Catherine is a professor of anthropology, and Anne is a former marketer and investment banker. After a couple of friends died in car accidents, Cathy and Anne thought it would be worth taking a closer look at the automobile and what it means to us as Americans. Do we derive pleasure from driving, and how? What awareness do we have of the role the car plays in our everyday life? Managing editor Tim Halbur has this interview with Anne Lutz Fernandez.

LUTZ: The pleasures are, we discovered, quite real. Convenience, and certainly the joys of bringing families together. And for a host of folks, the pleasures of speed and fun. The word "freedom" came up again and again. Now sometimes that word was code for convenience, but often it was an idealized kind of freedom. For young people – we interviewed a lot of teenagers – the notion that they were free from the restraints of home and get away from family was big. Even for adults, the notion of being able to get away came up again and again.

TH: In that regard, I feel like there's become – even as there is a little more awareness of a lifestyle that comes from being less car-dependent – a romanticization of outdoor sports and outdoor activities that you have to drive to.

LUTZ: Yes, and as soon as the automakers started marketing SUVs and light trucks to us those messages really started to dominate their advertising It was interesting, because early on in the research I talked to some ad executives, and I asked them, "Why are all the ads the same? Why are there so many ads where the car is winding along some road in the middle of nowhere, or perched on a mountaintop?" And a couple of them said, "That's not good advertising, you're supposed to differentiate." But for the category as a whole, the notion of selling the car, this vehicle, regardless of a particular brand, as a route to outdoor adventure, has been very successful. You think about all those model names, from the Escape to the Frontier to the Expedition. There's dozens of them that evoke not just freedom, but a very particular exploration of the frontier or a escape into the wilderness. Which we start to see is a wishful compensation for the fact that most of the driving we're doing is city and suburban driving and quite predictable and dull trips to Home Depot. 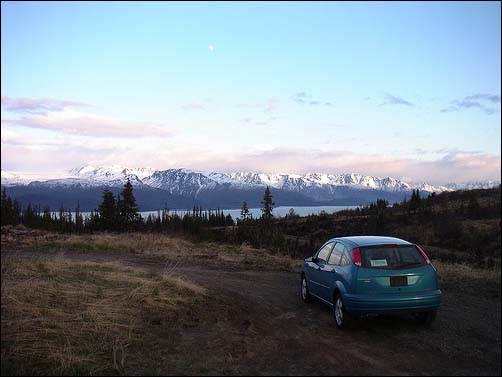 One of the ad executives I interviewed said that really people like the idea of driving more than they like driving. And so that's what they're selling, and that's what we're buying. When you first start asking people, "Why do you like your car?" All the positives come up first. And then you dig and you dig, and you start to get some of the frustrations and the day-to-day irriltations. But that first gut response – it's almost some kind of latent memory from the advertising messages. And I also think for older folks from our memory banks, from when it was more fun to drive, when it was easier to get around, when it was less crowded and there was less traffic.

TH: And also I think from our teenage years, when that was the only way you were going to get out of the house, and it gave you a sense of independence because you were alone in your own space that was under your control, and it got you places you couldn't go otherwise.

LUTZ: Yes. We did a focus group with teens that were about to get their license or had just received their license, and we also interviewed the parents of those kids. And it was clear that the parents were all reliving their own experience as children. So I think that we remember that time very vividly when we think about and talk about the car. The idea of driving taps very deeply into that personal nostalgia.

When we asked people, "Why do you think we drive as much as we do as Americans?" we were surprised how many people came back with, "We have no choice. I have no choice but to drive as much as I do, because of the way the country is laid out." People feel trapped by the built environment, but then they also don't recognize how many choices they're making from day-to-day. Nor had we, until we really looked at the data and talked to people about their real driving. Because the first response that people would give to the question, "Why do you drive so much?" is "I have to get to work." And we would ask, "Do you take any other trips during the day? Where else do you go?" And we did ask people to take a trip diary and report back to us, and people were quite surprised.

The national data suggest that we're taking many, many discretionary trips. That we're not trip-chaining, we're not putting kids on the bus anymore, we're taking extra trips to go driving, etc. We came across this very interesting study by this woman named Nancy McGuckin where she coined the term "The Starbucks Effect" that looked just at how many additional trips had been created by the whole coffee shop phenomenon. She studied six-year period where a million and a half extra trips were created just to get a cup of coffee or a snack or a small meal. So people are driving more than they need to, and some of it is the built environment but some of it is consumer culture and the choices that folks are making.

But a lot of it is also habit. Were just used to having the car. There's the convenience of having the car, but often it's habit, that you can just hop in and go. And it's an unthinking way of being.

TH: I feel like the entertainment factor is also a part of it. The car is the only place where I listen to NPR, so I look forward to that.

LUTZ: Yes, absolutely. In particularly the talk radio phenomenon was a direct outgrowth of people spending so much time in the car. A lot of the entertainment – the mp3 players in the back seats for kids, the DVD players, the satellite radio, all of those entertainment devices loaded up to keep us busy on our commute – obviously it's a cyclical thing. Because now it is comfortable, right? In particular if you've paid for some nice heated leather seats, and you're sitting in this comfortable environment. People say, "I need these things because my drive is so long." But now we're willing to put up with these long drives because they have these comforts and technologies in the car.

TH: Transit planners often bemoan that fact, that they have to try to approximate the comfort of the car in order to attract people.

LUTZ: Well one of the things we point out in the book is just how expensive cars have become because of all of these added luxuries. And a lot of Americans have gotten themselves into hot water spending too much on cars. If you look at the average price of an American car, it's $26,000. Which compared to a quarter-century ago, is almost 25% higher if you adjust for inflation. You would think that cars would be getting cheaper, but they're not because we're loading them up with all these accessories and options.

This recent bubble was not just a housing bubble, it was a car bubble as well. We're hopeful that one silver lining to this recession is that Americans are finally looking at their household budgets and realizing that they've overcommitted their family's financial futures to our vehicles.