Book Review: Shoup Passes the Torch With 'Parking and the City'

Parking and the City features Shoup at his witty best, accompanied by a group of passionate collaborators for the cause of rational parking regulations. The future of parking reform is in good hands. Donald Shoup admits that planners have been clamoring for a shorter version of The High Cost of Free Parking since the book was first published by Routledge in 2005. Parking and the City includes the pocket guide to Shoup-style parking reform some readers have been hoping for, but that's hardly the book's highest calling. 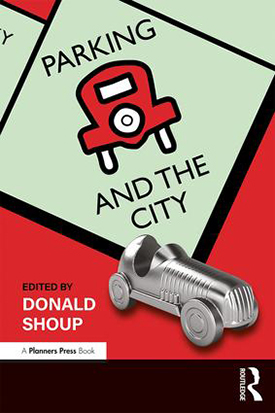 Shoup does consolidate the ideas, arguments, and witticisms of over 700 pages worth of The High Cost of Free Parking into a new tl;dr form in the first 55 pages of Parking and the City, but that doesn't mean the reader should expect Shoup to let the old approach to parking off the hook. As Shoupistas (the term adopted by those already invested in the parking reform cause) already know, Shoup has thought of everything when it comes to making the case for parking reform. Not only has he covered all the research angles, Shoup has also thought of relatable, real world examples and clever turns of phrase to accent every claim. It's hard to decide what's more impressive about Shoup's prose—the archive or the wit. The combination of the two overwhelms the status quo.

The only possible concern about the 55-page introduction to Parking and the City is that it's too thorough, potentially overwhelming the perseverance of even the most sympathetic audience. A reader might have the feeling of being pummeled to submission by evidence and clever turns of phrase. The challenge will be for planners and politicians to commit the right data and the right rhetoric to the cause at the right moment. It might be necessary to take and organize notes on the most useful of Shoup's rejoinders for future study and reference. Might I recommend Routledge publish a corresponding set of flashcards for ease of study? It would be a shame for information overload to short circuit the utility of the book.

More than just providing an abridged version of The High Cost of Free Parking, however, Parking and the City passes the torch of parking reform to a new generation of academics, professional planners, and transportation engineers.

Attendees of the APA's 2015 National Planning Conference in Seattle watched Donald Shoup receive the 2015 National Planning Excellence Award for a Planning Pioneer, coinciding with an announcement earlier that year that Shoup would retire from his position at the University of California, Los Angeles. A career's worth of accolades and an ardent group of converts secured an august position in planning history for Shoup, but Shoup has hardly disappeared from the scene. Since announcing his retirement, Shoup has still been busy online and around the city of Los Angeles. Decidedly contemporary news website Vox even distilled the messages of The High Cost of Free Parking into a video by that has climbed to nearly two million views on YouTube.

But the real work of securing the Shoup legacy will fall to the next generation of students and researchers. Success won't be measured in academic citations or page views, but in square feet and carbon emission reductions. Here's where Shoupistas should take note of Parking and the City as a sign post on the way to future research and case studies. Following the introduction, Shoup has gathered 51 chapters of case studies and research, organized into three themes: 1) off-street parking requirements, 2) prices for on-street parking, and 3) parking benefit districts.

Most significantly, Parking and the City announces a capable, passionate, cross-disciplinary collaboration to continue the work of Shoup in popularizing a rational approach to parking. Some sympathetic readers might also be pleasantly surprised to discover that this field of study (along with voices expressing concern about the consequences of the parking status quo that dominated the 20th century) pre-date the publication of The High Cost of Free Parking in 2005. The implied hope of Parking and the City is that the study of parking and implementation pf parking reform will last well beyond 2018.

In some of the book's essays, the reader sees signs of the clever writing Shoup has perfected, but no writer stumbles with too much flattery by imitation. The reader also sees many breadcrumbs toward further study and recent projects. While the book can at times reveal a more conventional collection of essays by academics, Parking and the City never falls into the traps of the most excessive examples of the genre. More than a passing glance will quickly reveal a consistent commitment to clarity, the hallmark of Shoup style.

The challenges of parking reform in the future will be well met by the authors of these essays, the graduate students Shoup generously credits with refining the book, and the many, many Shoupistas finding their voice in the political debate about parking in communities all over the country. The success of the many contributors involved in Parking and the City stems from an understanding of a simple truth about writing and research: Shoup doesn’t have to be the one to speak for parking reform. Facts speak for themselves.

The facts about parking in the United States revealed by Shoup have already proven remarkably portable, as the transition from academic to political to social media forums proves. Shoup is probably still the most skilled at making the case for parking reform, but that shouldn't deter us from following his lead. A mountain of evidence, an army of experts, a viral video, and a new book with Donald Shoup's name on the cover confirm that these ideas are bigger than any one person.

Bill Fulton tells the story about how he became a Shoupista—thanks in part to Donald Shoup's love of Hello Dolly!

Parking Minimums Not Required in a Larger Section of Houston