Most households, particularly those with lower incomes, spend much more than considered affordable on housing and transportation. Solving this problem is a great challenge and a great opportunity: reducing unaffordability makes communities more inclusive, and increases economic opportunity, freedom, and happiness.

How affordability is defined and measured can affect which solutions are implemented. Measured one way, a particular solution may seem effective and beneficial, but measured another, it may seem wasteful and harmful overall. Let me describe a specific example.

The latest International Housing Affordability Survey (IHAS) was released late January. It is widely promoted by its authors, and receives significant media attention. I spent part of February analyzing its methods and conclusions and just released my findings in a new report, True Affordability: Critiquing the International Housing Affordability Survey [pdf]. Let me share some highlights of my study and hope that you will read the full critique for more details.

My overall conclusion is that the IHAS is propaganda, intended to support a political agenda rather than provide objective guidance. The IHAS’s analysis methods are highly biased and many of its recommendations are unsupported by research. The authors, Wendell Cox and Hugh Pavletich, are either very poor researchers or intentionally misrepresent key issue.

There are many possible ways to measure affordability. Experts recommend measuring the portion of household budgets needed to purchase basic goods and services. Affordability was originally defined as households being able to spend up to 30% of their budgets on housing, but since households often make trade-offs between housing and transportation costs, experts now define affordability as households spending up to 45% of their budgets on housing and transport combined. This recognizes that a cheap house is not truly affordable if it has high transport costs, and households can rationally spend more for more accessible housing with more affordable transport.

The IHAS evaluates housing affordability using Median Multiples, which measure the ratio of median house prices to median household incomes. There are several inherent problems with this indicator. It only considers house purchase prices, ignoring other shelter costs such as maintenance, utilities, and property taxes, and it ignores transportation costs. The costs the IHAS considers are smaller on average than the costs it ignores. Since detached, urban fringe housing tends to have higher maintenance, utility, and transport costs, this exaggerates the affordability of urban expansion and underestimates the affordability of compact infill.

The IHAS analysis has other structural problems that bias results [pdf]:

These omissions and biases help explain the large discrepancies between the IHAS rankings and those of other affordability rating systems. For example, the IHAS ranks Atlanta and Houston as more affordable than Seattle and Washington, D.C., but when evaluated using Consumer Expenditure Survey data to measure actual household expenditures the ranking reverse, because the sprawled regions' low housing costs are more than offset by their higher maintenance, utility, and transport costs, making the sprawled regions the least affordable of the 22 regions for which data area available, as indicated below.

International comparisons show similar discrepancies. The IHAS ranks the United States as the most affordable of nine countries evaluated, but the United States ranks poorly when evaluated using OECD data on the portion of lower-income household budgets devoted to housing. The discrepancy is even greater when transport costs are also considered, since U.S. households spend a greater portion of budgets on transport than most countries. The United States also has lower home owner-occupancy rates than peer countries. This indicates that the Median Multiple is a poor tool for evaluating overall affordability.

IHAS ignores many benefits of living in a walkable urban neighborhood. It claims that Smart Growth increases travel times, based on regional commute duration data, but within virtually all regions, more central neighborhood residents have better access to jobs and services, and shorter duration commutes than urban fringe residents, as indicated below. This is particularly true for non-drivers, who have far more independent mobility and therefore greater economic opportunities in central urban neighborhood. The IHAS ignores these benefits. 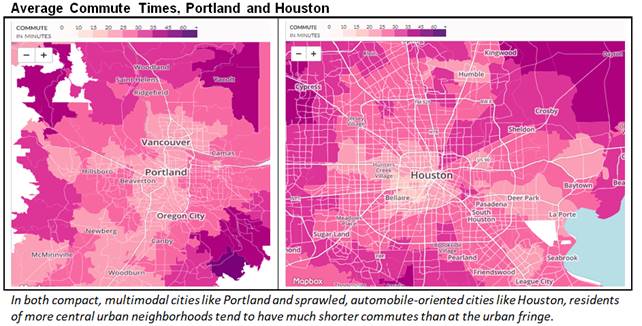 The IHAS makes numerous conclusions and recommendations unsupported by research. It blames housing unaffordability on urban containment regulations, ignoring other factors that affect houses prices. The regions it ranks most affordable are smaller, lower income, geographically unconstrained, and declining in population. In contrast, those rated unaffordable are large, attractive, high income, geographically constrained, and growing in population and economic activity, as illustrated below.

The IHAS claims with great certitude but no real evidence that urban containment policies are the primary cause of urban housing price increases. In fact, even studies it cites [pdf] indicate that restrictions on urban infill are much more common and costly than urban expansion restrictions, as illustrated below, and therefore a much larger cause of unaffordability.

More objective analysis indicates that housing unaffordability results from a combination of population and economic growth, plus constraints on both urban expansion and infill. Expansion may be appropriate in cities with abundant land nearby, but incurs high costs to residents and communities. As a result, there are good reasons to favor infill with policies that increase affordable housing in existing urban areas. The IHAS ignores most sprawl costs and Smart Growth benefits. It claims that Smart Growth consists mainly of urban containment, although it actually includes numerous strategies that help create more compact and multimodal communities, many of which increase affordability, as summarized in the table below. Cox and Pavletich are either too lazy to consult the extensive literature on Smart Growth strategies and impacts, or are intentionally misrepresenting these issues.

The IHAS misrepresents consumer demands. The National Association of Realtor's 2017 National Community and Transportation Preferences Survey found that 50% of respondents and 60% of Millennials prefer a townhouse or apartment that provides a shorter commute and neighborhood walkability over a detached house in an isolated, automobile-dependent area, and there is much more latent demand for housing in walkable neighborhoods than sprawled areas, as indicated below, the opposite of what the IHAS claims. 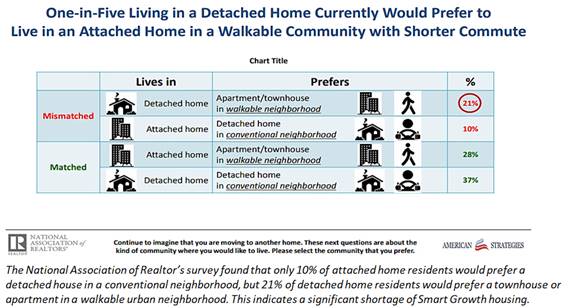 The IHAS ignores the mobility needs of people who cannot, should not or prefer not to drive, and the isolation and higher transport costs they experience in automobile-dependent, urban-fringe areas. It claims incorrectly that sprawl benefits disadvantaged people. Good research indicates the opposite: physically, economically, and socially disadvantaged people have more independence, better economic opportunities, and better outcomes in walkable urban neighborhoods than in automobile-dependent urban fringe areas. It claims that Hsieh and Moretti [pdf] support urban expansion when, in fact, they specifically recommend urban infill and public transit improvements.

Although the IHAS is presented as objective research, it does not reflect professional standards: its analysis is not transparent, it misrepresents key issues, fails to respond to legitimate criticism, and lacks peer review. The IHAS is propaganda, intended to support a political agenda. It is important to consider these biases and misrepresentations when using information from the IHAS.

Median Multiple ratings can help identify excessive housing prices, but only reflects a minor portion of total household costs and so are insufficient for diagnosing unaffordability problems or evaluating solutions. A high Median Multiple rating does not necessarily mean that most households suffer excessive cost burdens, nor does a low rating indicate that an area is affordable overall. The IHAS ignores basic household economics: a cheap house is not truly affordable if located in an isolated area with high transport costs, and households can rationally spend more for a house in a walkable urban neighborhood with cheaper transportation. More comprehensive indicators give very different conclusions; the devil is in the analysis details. Anybody who uses IHAS data should be warned about these omissions and biases.

How Not to Measure Housing Affordability

What is a ‘House’? Critiquing the Demographia International Housing Affordability Survey