The International Housing Affordability Survey rates affordability in selected urban regions. Although presented as objective research, the IHAS is actually propaganda. Users of this information should be warned about its biases
March 8, 2018, 7am PST | Todd Litman
Share Tweet LinkedIn Email Comments

Housing and transportation are most household’s two largest expenditures, representing more than half of an average family’s spending, and an even larger share for lower-income households. This is far more than considered affordable. When families cannot afford food or healthcare, the real reason is generally excessive housing and transport costs that leave insufficient money to purchase other goods.

The IHAS only considers a limited set of housing types, geographic areas and impacts. It uses Median Multiples ratings, which measure the ratio of housing prices to incomes, but ignores other household costs including utilities, maintenance and transportation. The costs it ignores tend to be larger on average than the costs it considers. These omissions exaggerate the affordability of urban-fringe housing, and the significant savings provided by compact infill development. 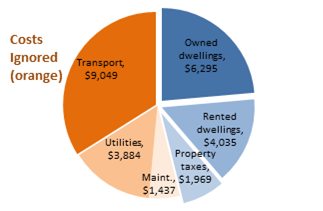 The Median Multiple reflects house purchase costs, which affect owned and rental housing and property tax costs (blue slices). However, it does not account for house maintenance, utility and transport costs (orange slices), which are on average larger than the costs considered. This exaggerates the affordability of detached, urban-fringe housing. These omissions help explain the large differences between IHAS affordability rankings and those that directly measure housing and transport expenditures.

According to study author Todd Litman, “The IHAS ignores basic household economics. A cheap house is not truly affordable if located in an isolated area where transportation is expensive, and households can rationally pay more for a house in a walkable urban neighborhood with low transportation costs.”

The study found large discrepancies between the IHAS and other affordability rating systems. For example, the IHAS ranks Atlanta and Houston more affordable than Seattle and Washington DC, but when evaluated by actual housing and transportation expenditures, the rankings reverse, because the sprawled regions’ low housing costs are more than offset by their higher utility and transport costs.

Although Houston and Atlanta households spend relatively little on housing, this is offset by their high transport costs, making them least affordable of all regions included in the U.S. Consumer Expenditure Survey.

The IHAS makes numerous conclusions and recommendations unsupported by research. It blames housing unaffordability on urban containment regulations, although they are actually uncommon and less costly than regulations limiting affordable infill.

The IHAS blames urban containment policies for high housing prices, although the research it cites actually indicates that urban infill restrictions are much more common and costly, and therefore contribute much more to housing unaffordability.

It ignores many costs of sprawl and benefits of Smart Growth. It ignores the mobility needs of people who cannot, should not or prefer not to drive, and growing demand for walkable communities. Recent consumer surveys indicate that most households want to locate in a walkable urban neighborhood, and would choose a townhouse or apartment in an urban neighborhood that offers a shorter commute and easy walking to shops, over detached housing in an automobile dependent area.

The IHAS fails to reflect professional standards: its analysis is not based on current best practices, is not transparent, misrepresents key research, fails to respond to legitimate criticism, and lacks peer review.

At best, the Median Multiple can help identify regions with high housing prices, but this only reflects a minor portion of total household costs and so is insufficient for diagnosing unaffordability problems or evaluating solutions. A high rating does not necessarily mean that most households experience excessive cost burdens, nor does a low rating indicate that an area is overall affordable. More comprehensive indicators give very different conclusions concerning affordability problems and solutions; the devil is in the analysis details.

This critique indicates that the IHAS is propaganda, intended to advocate an ideological position rather than provide objective analysis. The authors have a political agenda: they support urban expansion and oppose policies that result in more compact and multimodal development. Anybody who uses IHAS data should be warned about these omissions and biases.

Any good study includes detailed discussion of possible omissions and biases. The IHAS fails to do this. Here are a dozen caveats that users should consider when using its information.