Conventional planning is static, designed to lock in existing land use patterns. We need more dynamic planning to respond to changing household needs and community goals. My recent column, "Affordability Trade-offs," advocated a broad definition of affordability that considers middle- as well as low-income households, transportation as well as housing costs, plus future as well as current cost impacts. A subsequent column, "How Filtering Increases Housing Affordability," described how building more middle-priced housing tends to increase affordability through filtering, as some lower-priced housing occupants move into more expensive units, and over time as the new houses depreciate and become cheaper. This column describes how to our planning practices to support affordable and inclusive infill development.

An old friend once described an incident in an urban neighborhood ladies tea party during the late 1970s. By then, the area was well integrated, so the group was mixed-race, but one confused elderly woman observed proudly, “Well, we sure kept the Blacks out of here, didn’t we!” She evidently assumed that everybody else there shared her preferences for an exclusive neighborhood.

Few people would now use such explicitly racist language, but many conventional planning practices, such as minimal lot sizes, density restrictions, and prohibitions on multi-family housing, are still intended to exclude lower-income households from desirable neighborhoods. Fairness and opportunity require reforming these policies.

Conventional planning is static, designed to lock-in existing land use patterns. To be efficient and equitable, land market must respond to changing consumer needs and community goals. For example, if the number of people who want to live in a neighborhood increases, or a community wants to become more affordable and inclusive, responsive development policies allow higher densities and more affordable housing types. Similarly, if a community wants to become  healthier and less polluting, it must plan for better walking, bicycling, and public transit services. In fact, consumer surveys indicate that a growing majority of households want to live in walkable urban neighborhoods, but many cannot due to inadequate housing supply and high costs. Virtually everybody benefits if more low- and moderate-income households can find suitable housing in such areas.

Responding to these changing needs and goals requires dynamic planning. This is our realm: planners are professional change managers. It is up to us to identify specific policies and planning reforms that respond to changing needs.

A useful starting point for more affordable and inclusive planning is to understand the factors that affect housing development costs, and therefore the housing types that are most affordable. Single-family housing is land intensive, typically requiring three to six times as much land as a townhouse, and about ten times as much as a low-rise apartment. High rise buildings are costly to construct. In most situations the most affordable housing types are low-rise (two to six story) carriage houses, multi-plexes (e.g., duplexes and four-plexes), townhouses, live/work lofts, residential above commercial, and courtyard apartments, often called the missing middle, as illustrated below.

To evaluate the affordability impacts of missing middle housing I calculated the minimum incomes required to pay mortgages on the median prices of condominiums, townhouses and single-detached houses in my city, Victoria, British Columbia, assuming that households can spend up to 30% of their budget on mortgages.

Many current policies discourage development of affordable housing types. For example, most urban neighborhoods only allow low-rise (two story) houses (yellow in the map below), and require one or more parking spaces per housing unit, which significantly increases development costs in areas with high land prices. 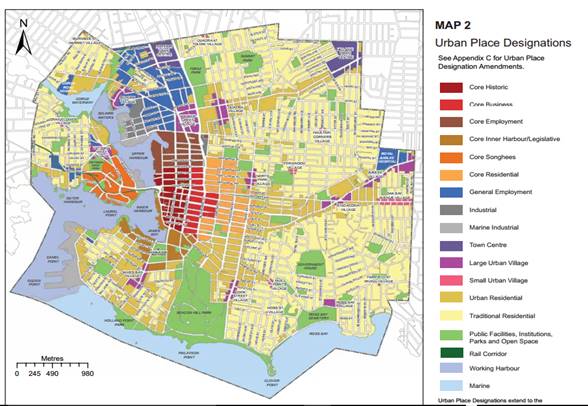 Most land suitable for residential development in Victoria (excluding parks and industrial areas) is restricted to two-story houses (light yellow in the map), and require at least one parking space per housing unit. These regulations drive up their costs and reduce affordability.

There are many possible ways to increase affordability. Some provide large benefits to small number of households that qualify for special services (often those with the greatest needs, such as people with disabilities or very low incomes), while others provide smaller benefits to a larger number of low- and moderate-income households. Some policies depend on subsidies, others reduce the costs of developing moderate-priced housing. Transportation affordability is also important. An inexpensive house is not really affordable if located in a sprawled, automobile-dependent area with high transportation costs. Walking, cycling, ridesharing and public transit are affordable modes – improving them allows households to reduce their vehicle costs and save money.

Below are specific local policies that can increase housing and transportation affordability.

For example, a rent subsidy for a particular group, such as people with disabilities or seniors, will increase affordability for recipients, but can cause rent inflation by allowing some households to pay more for desirable units, and so displace households that do not qualify. Only if the total supply of the desired housing increases, such as more lower-priced apartments in walkable urban neighbourhoods, can all households find suitable housing.

Subsidies and inclusionary zoning policies may increase affordability for the households selected to receive below-market housing, but such programs can usually only serve a small portion of affordable housing demands, and they can reduce total housing development, particularly moderate-price housing.

Inclusionary zoning can be successful in areas with very strong housing demand so developers always build as many units as regulations allow, but if demand is weaker they build fewer units [pdf], particularly moderate priced units, resulting in less affordable future housing supply. For example, if basic housing units costs $200,000 to build, and regulations require 10% be priced at $100,000, each of the nine market-priced units bears an additional $11,111 ($100,000/9) cost, which adds about $20,000 to their final price, including additional overhead and financing costs. This is a small increase for high-priced housing (2% for a million dollar house) but a large increase for lower-priced housing (11% for a $200,000 condominium). In this way, inclusionary zoning can reduce housing affordability, particularly over the long run, by reducing construction of moderately-priced housing that contributes to future affordable housing stock.

The strategies that tend to provide the greatest total affordable benefits reduce infill development construction costs. These increase the affordability of both for-profit housing and the number of units that can be built by non-profit development agencies. For example, a million dollar subsidy could only create about five affordable single-family suburban houses, but ten to twenty affordable urban apartment units with unbundled parking.

Cities for Everyone (2018), Victoria Affordability Backgrounder

Housing Affordability and Livability Agenda is a City of Seattle program to create more affordable and inclusive neighborhoods.

Rick Jacobus (2016), Why We Must Build; We Can’t Build Our Way Out Of The Housing Crisis … But We Won’t Get Out Without Building, Shelterforce.

Making Room Vancouver is the City of Vancouver’s program to create more affordable and inclusive neighborhoods.

A New Guide to Revitalizing Cities Around the World

New research helps explain why urban housing prices are escalating and how communities can increase affordability. It emphasizes the need to upzone sufficient urban land to create a large competitive market for parcels ready for infill development.