Good research indicates that building middle-priced housing increases affordability through "filtering," as some lower-priced housing occupants move into more expensive units, and over time as the new houses depreciate and become cheaper. My recent column, "Affordability Trade-offs," advocates a broad definition of affordability that considers middle- as well as low-income households, transportation as well as housing costs, and future as well as current cost burdens (see table below).

A narrow definition favors policies that preserve and subsidize cheap housing. A broader definition gives more support to policies that allow much more development of moderate-priced housing ($200,000-600,000 per unit) in walkable urban neighborhoods. Even if the new units are initially too pricey for lower-income households, they increase affordability through filtering, as some lower-priced housing occupants move up to the moderate-priced units, and over time as they depreciate and become cheaper.

There is solid research indicating that filtering occurs, including Stuart Rosenthal's 2014 study, "Are Private Markets and Filtering a Viable Source of Low-Income Housing? Estimates from a 'Repeat Income' Model," published in the American Economic Review, and Miriam Zuk and Karen Chapple’s 2016 study, Housing Production, Filtering and Displacement: Untangling the Relationships [pdf], published by the Berkeley Institute of Government Studies. Similarly, recent research by the City Observatory shows that displacement rates are lower in neighborhoods that increase housing supply and therefore reduce competition for available housing units.

A study by economist Evan Mast described in Daniel Herriges’s, The Connectedness of Our Housing Ecosystem, used an innovative approach to measure filtering impacts. It tracked the previous residences of the occupants of 802 new multifamily developments in 12 North American cities, and the previous residences of the households that replaced them, through six cycles. It found that building market-price apartments causes a kind of housing musical chairs, as households move into new units. This analysis indicates that for every 100 new market-rate units built, approximately 65 units are freed up in existing buildings, accommodating up to 48 moderate- and low-income families.

These studies indicate that increasing housing supply tends to reduce housing prices, particularly over the long-run, although Zuk and Chapple emphasize that subsidies are often needed to deliver enough lower-priced housing to avoid lower-income household displacement.

Some studies suggest that increasing housing supply is ineffective at increasing affordability. Richard Applebaum and John Gilderbloom’s 1983 study, "Housing Supply and Regulation: A Study of the Rental Housing Market," published in the Journal of Applied Behavioral Science, found that cities that had more rental housing construction do not have lower rents or higher vacancy rates. Similarly, Andrejs Skaburskis’ 2006 "Filtering, City Change and the Supply of Low-priced Housing in Canada," published in Urban Studies, using 1996 Canadian census data, found that the filtering process is too slow to significantly reduce low-income households housing burdens.

However, these studies are old and did not account for significant confounding factors. For example, rental housing growth tends to be greatest in attractive and economically successful cities that also have more population growth and higher wages; their rent increases would probably have been higher with less housing supply growth. They also focus on low-income affordability, overlooking middle-income housing costs. Another problem with these studies is that they ignore the additional costs of older houses. Older houses and apartments often have low rents, but these partly reflect their higher operating costs, including greater maintenance and utility expenses, and other undesirable factors such as less safety. Older housing stock can be rehabilitated with weatherization and structural reinforcement, but this is costly; replacement is often more cost effective overall, particularly if the new buildings have more units. As a result, it is unsurprising that areas with more housing supply growth also have less very-low-priced housing, but that does not really mean that in attractive cities, increasing moderate-cost housing supply is ineffective at increasing affordability for moderate- and low-income households.

A paper from Andrés Rodríguez-Pose and Michael Storper claimed that upzoning will worsen, rather than ameliorate inequality and gentrification, based on evidence from a Washington Post article that examined data on changes in home prices by various price tiers, and a study of upzoning effects on land prices in Chicago. As Joe Cortright pointed out in, Will Upzoning Ease Housing Affordability Problems?, the Post's analysis ignored multi-family buildings, and the data actually indicates that supply increases were actually highly correlated with lower rental price inflation. The Chicago study reflected a small number of parcels and a limited time period: it does not really prove that broad upzoning will increase housing prices city-wide.

A study by Dr. John Rose, The Housing Supply Myth analyzed the ratio of household growth to housing unit growth in 33 Canadian metropolitan regions and found that in some areas (notably, Toronto, Vancouver and Victoria), prices  skyrocketed although housing units grew faster than households. However, Rose's methodology is criticized by Professor Nathan Lauster and statistician Jens Von Bergmann for failing to account for data problems, particularly changes in data collection methods between census, which counted many previously overlooked housing units, and so exaggerated the growth in housing units. Another major weakness with Rose's study is that it aggregates all housing in a metropolitan region, which in cities like Toronto, Vancouver and Victoria includes many time-shares and student housing. As a result of these problems, Rose's  study does not really prove that increasing middle-priced housing supply is ineffective at increasing middle- and lower-priced housing affordability.

If you want evidence that increasing moderate-priced housing increases affordability visit beautiful Montreal, where housing prices are 20-40% lower than in peer cities. Why? Because for the last century Montreal development policies encourage compact, Missing Middle housing types (townhouses and low-rise apartment buildings) in most neighborhoods. Similarly, recent experience indicates that even in high growth cities like Seattle and Portland, increasing rental apartment supply does drive down prices. During the last year these cities have built tens of thousands of new rental apartment units, and Seattle experienced a 2.4% decline, and Portland a 2.6% decline, in average rents, despite strong population and economic growth.

Seattle Rent Growth Over Past 12 Months 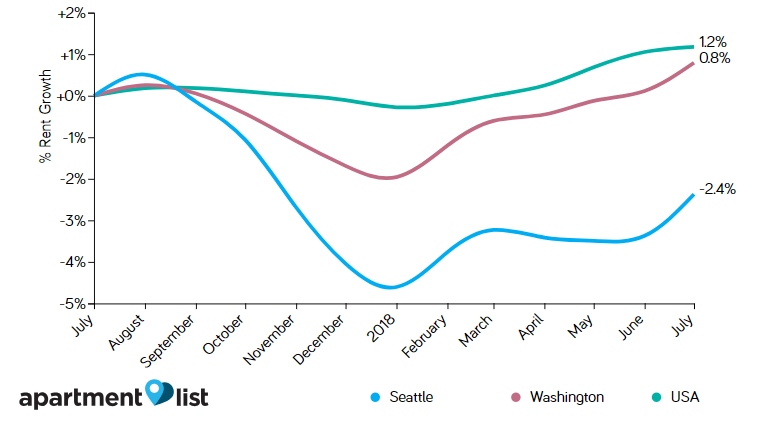 Such one-year reductions are insufficient to make these cities truly affordable to lower-income households, and much of these new housing consists of small, city-center high-rises that are unsuited to many households, particularly families with children, but it demonstrates proof-of-concept: building lots of moderate-priced housing increases both low- and middle-income affordability, particularly if maintained for several years. Here in Victoria, where our population grows about 1.5% annually, we call this the 1.5% Neighborhood Affordability Solution. [pdf]

Housing advocates sometimes propose policies to preserve old but cheap housing, but these often occupy land that is suitable for infill. A responsible affordable housing policy allows older housing stock to be replaced when appropriate, particularly if that increases supply, for example, if an older single-family house can be replaced by multiplexes, or a two-story apartment can be replaced by three or four stories. Although these units will initially be too costly for lower-income households, they expand housing supply, which drives down prices, and become more affordable over time.
The table below summarizes what increasing moderate-priced housing supply faster than growth in demand does and does accomplish. It does increase affordability for both low- and moderate-income households, particularly over the long run as the new units depreciate in value; in fact, increasing moderate-priced housing supply will tend to increase depreciation. Increasing market-rate housing supply does not eliminate the need to subsidize housing for people with special needs, but it can reduce the subsidy needed to rent a given quality of housing, and so increases the number of subsidized units that can be rented with a given budget.

Communities that want true affordability, including middle- as well as low-income households, future as well as current affordability, and transportation as well as housing affordability, should implement policies to allow housing supply in walkable urban neighborhoods to increase faster than population growth.

Let thousands of new houses bloom! Accomplishing this will require zoning code and development policy reforms that make it easy to build lower-priced housing type—multiplexes, townhouses and low-rise apartments—in residential neighborhoods that are currently only allow single-family houses. These policies help reduce housing prices and increase the number of affordable units that can be built with a given housing subsidy. I'll describe these strategies in a future column.

Daniel Hertz (2015), What Filtering Can and Cannot Do, City Commentary.

Daniel Herriges (2019), The Connectedness of Our Housing Ecosystem, Strong Towns.

Sightline Institute (2019), Cruel Musical Chairs (or Why is Rent So High?) A Simple Reason: We Don’t Have Enough Places to Live (Video).

Old Urbanist (2015), When the Market Built Housing for the Low Income.

New Research Sheds Light on How Housing Filters Through the Market

The idea of filtering is key to pro-housing-development arguments of the benefits of market-rate housing to the affordability of housing. New research finds that filtering is highly variable depending on location.