[Updated 6-17-2017] Just over a year ago, the first parking-protected bike lane opened in Los Angeles on Reseda Boulevard. While the United States' second largest city may have been slow to get on the cycle track, it's making up for it now.

[See May Planetizen post of interview of Ms. Reynolds.]

"Bike signals are not required for protected bike lane intersections; Long Beach uses them, Temple City’s Rosemead Boulevard and L.A.’s Reseda Boulevard do not," writes Linton on Tuesday about the ribbon-cutting for the new bike lane to be held Thursday.

"Bicycle signals make crossing intersections safer for bicyclists by clarifying when to enter an intersection and by restricting conflicting vehicle movements," according to the National Association of City Transportation Officials.

Bike signals will advance cycling by tackling two issues: First, they address the general issue of increasing riding safety, perceived to be the largest barrier in an April 2015 People for Bikes survey:

Safety concerns are the biggest barrier for most people, even among active riders. Overall, 52% of the adults surveyed are worried about being hit by a motor vehicle.

Second, they target the main location of bicycle crashes with motor vehicles, traffic intersections. According to the Federal Highway Administration, "Forty-one percent of [bicycle and pedestrian] crashes occurred at roadway intersections, and an additional 8 percent occurred in driveways or alley intersections. [Pedestrian and Bicycle Crash Types [PDF]. 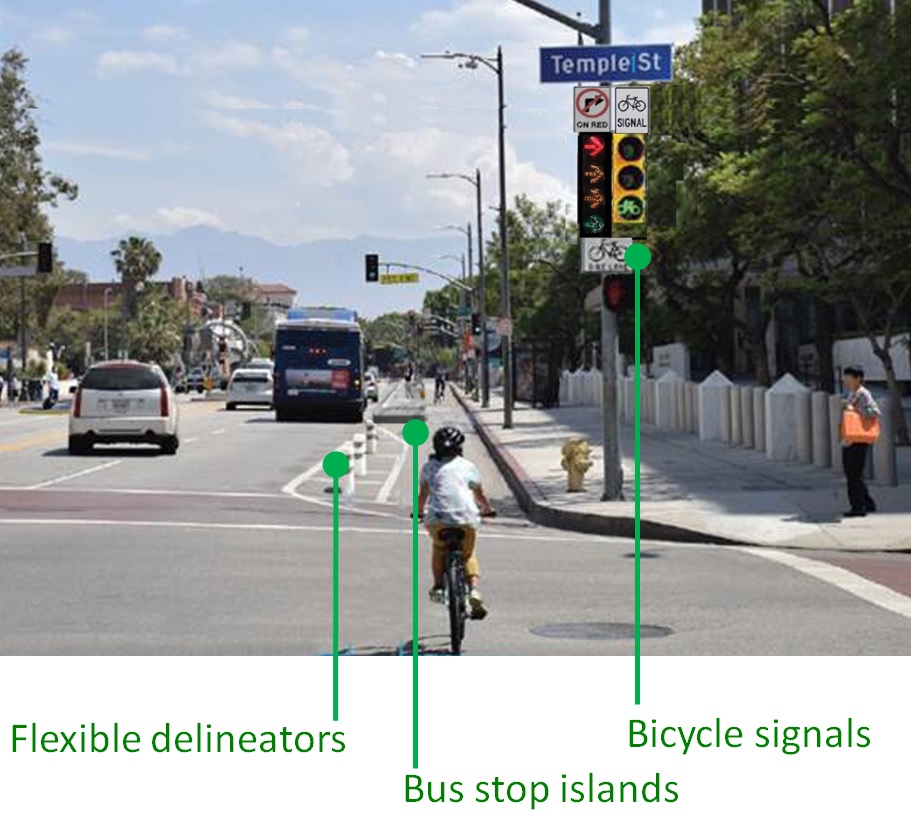 Instead of stressful merging through car traffic to make a vehicular left turn, cyclists make a low-stress left turn similar to the way a pedestrian would.

Look for the box is in the bike lane, not the left-turning lane. It is also known as a "two-stage turn queue box."

Cyclists avoid conflict with buses, but they need to watch for transit passengers walking across the bike lane from the sidewalk or the transit island.

Linton includes lots of great photos of the Los Angeles Street bike lane. Take a 20-second tour of the new lane in this video.

[The post was updated to reflect the correct facilities on Temple City's Rosemead Boulevard.]