There are many ways that communities can support and encourage affordable housing development. Let's compare them. Housing and transportation are most household's two largest expenditure categories, and are a major financial burden for many lower-income households. As a result, increasing housing and transportation affordability is an important planning objective. In recent years, planners have developed a better understanding of what this means and how to evaluate affordable housing development strategies.

Affordability refers to households' ability to purchase essential goods and services, and so depends on their ability to control costs, for example, to reduce housing and transport expenditures so more money is available for food, healthcare and education. Although all households want to save money—even wealthy households enjoy cheaper limousine fuel and discounted first-class airfares—affordability applies primarily to lower-income households that have difficulty purchasing basic goods. Not every household will take advantage of all money-saving opportunities, some may choose more expensive homes or vehicles than absolutely necessary for practical purposes, but the ability to save money increases affordability and economic security.

When evaluating affordability policies, it is important to recognize the diversity of demands, even among lower-income households. For example, some need larger houses, studios or home workshops, accommodation for people with disabilities, or garages for various vehicle types. Some lower-income households rely on walking and cycling, public transit, or automobiles, and many rely on a combination of these options. These demands often change over time, so affordable housing options should be flexible and responsive to changing needs.

The term, affordable housing, refers to a wide spectrum of housing types, including homeless shelters and transition housing, subsidized social housing for people with special needs, and various housing types that low- and middle-income households can rent and purchase, as illustrated below. 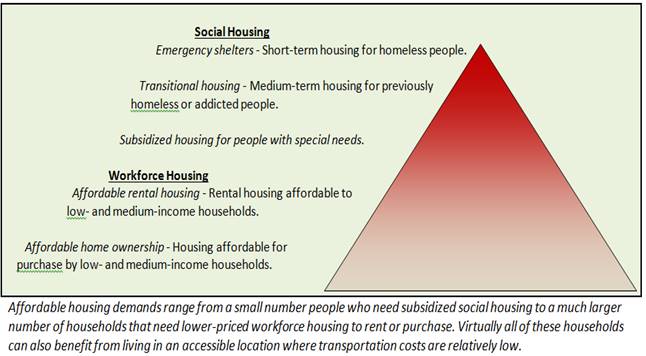 The dynamic nature of housing prices can complicate affordability analysis. In particular, increasing the supply of middle-priced housing tends to increase affordable housing supply indirectly, as some households move from low- to the new middle-priced units, and over the long-term, as the new housing depreciates in price and becomes more affordable.

Let me describe a specific example of this. My city, Victoria, has a strong downtown that never had minimum parking requirements. About a decade ago, in response to a design charrette, the Downtown Core Area Plan eliminated parking requirements in an adjacent area, Harris Green. Since then, the downtown core has experienced significant new development, hundreds of new units, consisting largely of mid- and high-rise multi-family condominiums that sell for $200,000-500,000, which is a moderate price for Victoria, but not affordable.

However, after one of the projects was completed, a young neighbor who lived in a cheap old apartment on our street purchased one of the condominiums, which freed up an affordable rental unit. Had the city not reduced parking requirements there would be less downtown development, resulting in fewer moderate-priced condominiums that attract current renters and increase affordable units. This zoning code reform results in a more efficient real estate market that can respond to the growing consumer demands for urban housing; expanding these reforms to other urban neighborhoods, where land prices are lower, would further increase affordability.

Five common strategies for increasing housing affordability are described and compared below.

On average, houses depreciate 1-3 percent annually, which is good news for affordability in communities with an abundant supply of older but still functional houses. In such areas, providing affordable housing may involve helping low-income households repair and weatherize their homes to keep them safe and reduce utility bills. This may require subsidies or low-interest loans.

Governments can sponsor and subsidize development of social housing to meet specific needs, such as seniors, people with disabilities, and low incomes. This is often the only way to serve unmet housing needs, and governments are often able to coordinate and mobilize resources unavailable to private developers, but it tends to have relatively high costs due to the complexity of government administration, and can generally serve only a small portion of total affordable housing demands.

Increasing rent subsidies in a market with limited affordable housing supply may favor some groups (those that qualify for the subsidy) to the detriment of others, and can contribute to rent inflation. For example, if city with 20,000 lower-income household but only 10,000 affordable housing units offers a new housing subsidy for people at risk of homelessness, low-income seniors, or people with certain disabilities, the recipients will benefit, but other groups, such low-income workers, college students, and people with disabilities that do not quality for the program will compete for fewer available units, forcing some to live elsewhere or pay more than they can afford, and the increased demand may allow property owners to raise rents more than would otherwise occur. Only if increased subsidies are implemented with policies that increase housing supply can all lower-income households benefit.

Such housing can be a curse to lower-income households, if after moving to an automobile-dependent area they experience an economic shock, such as reduced incomes, a vehicle failure or crash, or fuel price spikes. This explains why sprawled areas tend to have higher foreclosure rates than more central, multi-modal locations: improving transport options increases economic resilience.

Mexico's experience offers a useful cautionary tale about this type of development. Mexico established government programs that encouraged private developers to build large numbers of inexpensive single-family homes on converted farmlands. Because they are located at the urban fringe, these new communities have inadequate public services, and jobs are difficult to access. Residents bear high transportation costs and impose high traffic congestion, accident risk, and pollution emissions. Research suggests that this reduces overall economic productivity and opportunity. Most households are better off living in more central urban locations that provide better access and transport options.

Inclusionary zoning requires developers to sell or rent a portion (typically 10-20 percent) of the units they build at below-market prices. Like Robin Hood, it forces higher-income households to cross-subsidize their lower-income neighbors. If required of all development in an area these cost are partly capitalized into land values, minimizing the burden on individual developers. However, this strategy is only successful if new housing demand is very strong, if not, developers build fewer units, particularly moderate priced units, which can result in less total affordable housing supply.

For example, if the cheapest housing units costs $200,000 to build, and regulations require 10 percent be priced at $100,000, each of the nine non-qualifying units bears an additional $11,111 ($100,000/9) cost, which adds about $20,000 to their final price, including overhead and financing costs. This is a small increase for high-priced housing (2 percent for a million dollar house) but a large increase for lower-priced housing (11 percent for a $200,000 condominium). Since lower-priced housing development tends to be price sensitive, this can significantly reduce the number produced. In this way, inclusionary zoning can reduce housing affordability, particularly over the long run, by reducing production of the moderately-priced houses that will be the future affordable housing stock.

Allow and support owners of existing urban properties to increase density, for example, by converting a garage or basement into a rentable suite, adding a story, or replacing single-family with multi-family housing. Since wood-frame construction tends to be cheapest, and elevators add significant costs, the most affordable housing tends to be low-rise (two- to five-story) townhouses and multi-family, although mid-rise (five- to ten-story), and high-rise (more than ten story) buildings may be relatively affordable where land prices are very high. The Missing Middle refers to a variety of low-rise housing types that are particularly suitable for urban infill.

This tends to be the most cost effective overall, because it minimizes infrastructure and future transport costs, including residents' vehicle expenses, and indirect costs such as road and parking infrastructure requirements, congestion, accidents and pollution. By providing more affordable transport options that residents can use if needed, such as if they lose their job or their car breaks down, this strategy increases economic security.

In most cities there is large potential for affordable infill housing development, including moderate-priced development that becomes affordable over time, but such development can create local impacts (construction noise and dust, and increased vehicle traffic and parking problems), which lead to controversy and neighborhood resistance.

The table below compares these different strategies and identifies their most appropriate applications.

Below are key conclusions of this analysis:

What do you think? Have I overlooked any important strategies? Are there other advantages and disadvantages to consider?

Jason Furman (2015), Barriers to Shared Growth: The Case of Land Use Regulation and Economic Rents, comments by the Chairman of the White House Council of Economic Advisers to the Urban Institute.

Kyle Russel (2014), “This One Intersection Explains Why Housing Is So Expensive In San Francisco,” Business Insider.

Reports of the city’s death have been greatly exaggerated, according to new research from Smart Growth America.