Report: Electric Vehicles Best Option in Most of U.S.

A new Union of Concerned Scientists report shows that due to considerable gains made in cleaning the electric grid and in producing electric vehicles more efficiently, EVs are the environmentally sensible choice. The UCS report, "Cleaner Cars from Cradle to Grave (2015)," considers three variables in its evaluation of lifecycle carbon emissions that includes "vehicle production, operation, and disposal":

"Two-thirds of all Americans now live in areas where driving an EV produces fewer climate emissions than almost all comparable gasoline and gasoline hybrid cars—a fact attributable to more efficient EVs and an increasingly clean electricity grid," states the introduction to the report.

To see the fuel efficiency necessary to match that of an EV, find your region on the map below: 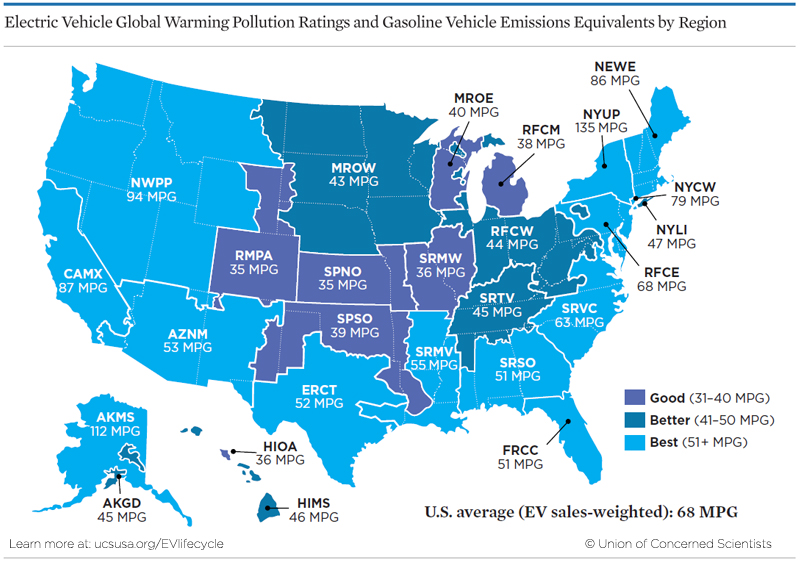 The lowest fuel efficiency on the map is in Kansas with 35 mpg. The average fuel efficiency for a new passenger car in the United States is 36 mpg; for a light truck, it's 25.3 mpg, according to the Department of Transportation.

The report accounts for the fact that "BEV [battery electric vehicle] production results in higher emissions than the making of gasoline cars—mostly due to the materials and fabrication of the BEV lithium-ion battery," writes Rachael Nealer in her UCS blog.

For an interesting read on the new report, please see David Roberts' piece in Vox.

A June CityLab article based on a working paper from the National Bureau of Economic Research presents a contrary viewpoint (posted here). The report also considers criteria pollutants and rebates given to EVs.

Should Electric Vehicles Be Taxed or Subsidized?

The answer depends on location, according to previous studies on EVs. The study from NBER evaluated both gas and electric-powered vehicles to determine their effect on the environment. A surprising recommendation is a new road funding option.