There are plenty of opinions but no action on the issue of transportation funding in the United States. What will it take to move the country—and its states, regions, and localities—forward? The seemingly compelling story of infrastructure investment as critical to economic development, jobs, international competitiveness, and safe travel has failed to produce the necessary coalition for the reauthorization of a federal surface transportation bill, legislation that, in the past, was a source of bipartisan consensus on transportation needs and spending. Reams of analysis and blue ribbon panel reports, aggressive lobbying by stakeholders, and endorsements by media have failed to produce evidence of progress toward reauthorization. The normal fundraising/revenue extraction strategies have been exhausted. Stakeholders have tried rational strategies of sharing empirical data and evidence of need, they have appealed to competitive motivations and jealousies, they have suggested waning international competitiveness, they have attempted to guilt or worry people into investing with stories of deteriorating system safety and the prospect of catastrophic failures, and they’ve appealed to human aspirations by taunting the public about leaving crumbling infrastructure as their legacy to the next generation and an embarrassment to our forefathers. It has even been proffered that progress on transportation could represent a signature accomplishment, showcasing to the public that the do-nothing Congress with abysmal approval ratings can actually accomplish something.

But nothing has worked. We don't even have an executive order solving the problem. While some prognosticators have bemoaned the deterioration of bipartisan consensus on transportation infrastructure and funding, in reality there is a bipartisan consensus—to do nothing—at least nothing long term and nothing before the very last possible moment.

Even the recent decline in gasoline prices has failed to rally support to what would seem to be a logical solution to the impending crisis, a phased-in fuel price increase that all would only offset a fraction of the decline in fuel prices witnessed in the last half year. Yet, this prospect is labeled as politically toxic, with only a handful of active supporters amongst those who have responsibility to make actual decisions.

Perhaps a tax on opinions about transportation funding would work, as such opinions seem to be so abundant?

So how much money do we really need for transportation?

There is obviously a disconnect between stakeholder perception of need as revealed in their estimates of the transportation funding deficit versus the public’s perception of need as evidenced by their willingness to support additional revenue extractions to fund transportation infrastructure and services. This disconnect is not new, and in spite of some compelling feedback in the form of unwillingness to fund infrastructure at anywhere near the levels experts claim are needed, the profession hasn’t budged off their estimates of need. While there is a growing record of individual states, counties and municipalities moving ahead with new local revenues sources, few begin to satisfy the levels of need outlined in professional estimates. Estimates such as those implicit in the American Society of Civil Engineers (ASCE) America’s Infrastructure Report Card and American Association of State Highway and Transportation Officials's (AASHTO) Bottom Line Report represent technically sound summations of industry aspirations for both maintaining existing infrastructure and responding to anticipated growth.

Earlier in my career I was convinced these problems boiled down to a communications problem. Those stuffy, nerdy engineers, not known to be good communicators, simply had not convinced the public of the merits of their arguments. The public, grounded in the here and now, is less inclined to anticipate future needs that are predestined both by the normal aging of infrastructure and the growth in demand inherent in growing population. Not to mention the subsequent needs for mobility and materials delivery produced by growth. The public doesn't see the undersides of bridges or the depth of deterioration of pavements or work with forecasts of future demands. They can’t be expected to fully understand the needs.

Old wives tales like "An ounce of prevention is worth a pound of cure" and "A stitch in time saves nine," perhaps characterized our forefathers' 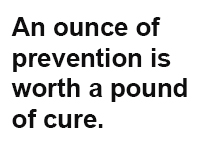 wisdom when it comes to recognizing the benefits of timely action. For example, every engineer knows that the cost of fixing aging pavement before the steel rusts or the subgrade deteriorates is dramatically cheaper than the full rebuilding required as a result of procrastination on timely maintenance—but the public, perhaps, doesn’t understand this. And don’t get me started on the higher cost for right-of-away if we procrastinate roadway widening. Maybe the current generations, arguably more self-absorbed than their predecessors, with fewer having offspring, and perhaps less sensitive about the infrastructure needs or debt burdens they are leaving to the next generation, just don’t care.

But, maybe the public hears it but just doesn’t believe it. In the 1990s most transportation planners were extrapolating growth trends and predicting "sky-is-falling" gridlock on the roadway system absent more spending. In reality the combination of economic, demographic, and technological phenomenon have resulted in current roadway travel demand levels being approximately 25 percent below those one would have anticipated with straight-line extrapolation from the 1990-2000 trend. The sky didn’t fall, and we have had several years with lessening congestion and lane miles of roadway capacity growing faster than vehicle miles of travel. Since 1970, public transportation capacity, measured in vehicle miles of service, has grown at three times the pace of transit ridership. Are these rare examples, or is the public skepticism about the credibility of "critical" needs justified?

Or maybe the public has angst regarding the cost or cost effectiveness of transportation infrastructure.

Myriad stories of high costs, cost overruns, less than anticipated demand, and delays in implementation are common fodder for the media and have been addressed in the literature as well. The recent story of the $4 billion train station at the World Trade Center exemplifies the issues. If this investment were amortized in perpetuity at a measly 3 percent, the expenditure for each and every trip using the station would approximate $6.00—just for walking through the station, not even including the station operating costs. It is beautiful, but was it a wise investment of scarce resources? Everybody has stories of projects that seemingly take months or years beyond what was expected. Project costs for something as straightforward as a new interchange are incomprehensible to the layperson. Maintenance of traffic strategies sometimes appears to be designed to maximize cost and project duration. We seem to be building infrastructure that amortizes out to 20 or more cents per vehicle mile of travel accommodated over its life, while users don’t seem to be willing to pay more than the approximately 2.5 cents per mile of travel that pencils out for an average 20 mpg car and 50 cent per gallon fuel tax.

Where should the money come from?

Intimately related to the issue of the resources needed for transportation is the issue of how to raise those funds. This of course presumes that someone is actually interested in raising new revenue, as compared to the ongoing tolerance of incurring greater national debt by targeting general fund resources as a means of funding transportation infrastructure. The gas tax, a user fee mechanism of funding transportation based on the concept that those that benefit from mobility are the parties that should fund it, is a seemingly logical mechanism that has served well for decades.

The alternative to the gas tax isn’t a perfect revenue raising mechanism just waiting for congressional action—no such perfect mechanism exists. The alternative has been to do nothing. A rational gas tax increase could easily meet needs for a decade or two, which is a huge improvement over the repeated short-term extensions of late. The mechanism for raising revenue is extremely cheap to administer, and doesn’t suffer from the security and confidentiality issues or administrative costs that might surround more refined per-vehicle-mile funding mechanisms. What is perceived as its greatest weakness—it’s visibility to the taxpaying public—is, one could argue, its greatest strength. The gas tax has the correct behavior-influencing characteristics. Fuel price increases send the correct messages to travelers. Higher prices dampen demand, which complements the goal of having adequate transportation system capacity by discouraging fuel consumption and the emission consequences. Higher taxes also influence vehicle choice and travel destination/location choice decisions. While carrying the stigma of being badged as a "tax," this user fee mechanism of funding infrastructure remains logical and equitable.

In an era where a significant share of policymakers are inclined to support a variety of investment and policy actions designed to modify travel behavior for environmental and other reasons, it would seem easy to build a coalition to support a logical mechanism of transportation funding that sends the right signals to travelers. Some of the proposed multi-source 21st century transportation funding strategies being considered are horrendously complex and could make project development contentious and expensive. Moreover, inherent in these processes is a need to build consensus among multiple stakeholders, each of which has veto power by virtue of controlling revenues. Some of these strategies are new and different and sophisticated—there's just no compelling evidence that they are better, and there are bound to be numerous unanticipated consequences.

And increasing the gas tax does not preclude a host of other modifications to transportation resource programming or policy. For example, the increased revenues could be passed directly back to the states and not subject to the traditional redistribution or administrative burdens characteristic of federal resource distribution programs. Various rules and regulations that impact project delivery and cost could be modified or rescinded. The level of government which collects revenues can be partially decoupled from the authority for resource programming. Capping mechanisms can be put in place so that if fuel prices skyrocket, fuel taxes ratchet down. Or the tax could remain as per gallon fees, indexed to overall inflation rates and not at risk of rapid acceleration if fuel prices move up.

A wise person once said, "If nobody’s following then it isn’t leading." In spite of people staking out virtually every possible position regarding

funding transportation infrastructure, nobody's following. Maybe the right people aren't leading. Maybe the people that are leading are not leading in the right direction. Maybe the public has become so cynical that no one will follow anyone until the credibility of the leaders improves or the consequences of not following become clearer. There may not be a "Hallmark" happy ending to the search for a longer term transportation funding strategy – perhaps just more can kicking, uncertainty, and frustration.

The opinions are those of the author—or maybe not—but are intended to provoke reflection and definitely do not reflect the policy positions of any associated entities or clients. [email protected].