Measuring the Broader Impacts of Transportation

A recent study from the CEOs for Cities criticizing the Texas Transportation Institute's Urban Mobility Report has rightly garnered a lot of interest. Their case against the TTI main index is correct, but does not go far enough.

The debate between CEOs for Cities and TTI is really about methodology. The distinction being discussed is important – but ultimately the focus of both groups is still somewhat missing the point. They are both still centered on measuring just one facet of how well transportation is serving us. Thus it is a limited debate about how to measure mobility of people in cars - as if that is all that matters when it comes to assessing how well the transportation system is serving society. 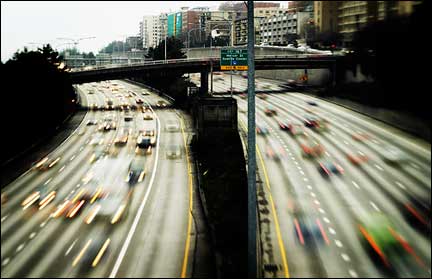 Over 50 years ago, Lewis Mumford posed the question "What is transportation for?" Mumford felt that if we had asked this simple question at the start of the interstate era we might not have committed billions of dollars to the creation of what he called a monochromatic transportation system. In his view, we supported highways to the detriment of transit and cities, mainly because transportation began to be seen as end in itself - rather than a means to an end. We lost sight of the fact that a transportation system affects almost all aspects of daily life and that its value should not be judged purely on the basis of how well it affords the easy movement of vehicles.

Recently, there have been signs that after fifty years under this regime - where mobility considerations ruled all our decisions about transportation - the tide is beginning to turn. The new emphasis of the US DOT, HUD and EPA on the issues of transportation and livability is one sign of the first tentative steps being taken to place transportation in a broader context. Some have pointed out that the concept of livability as it is current posed is still somewhat nebulous. This is true, but the fact remains that the discussion of livability signals an important change in focus at the federal level. What is needed now are ways of measuring these broader impacts that are implied by the term livability. This will allow us to effectively assess the extent to which transportation is serving our real interests, over and above considerations relating to vehicle mobility.

By focusing on transportation in a broader context we will be able to start to address questions such as the true cost of focusing so much attention to vehicle mobility. To answer questions like these and others about the broader impacts of transportation, our team at UCONN is working to develop the Transportation Index for Sustainable Places. One component of this TISP considers the cost of transportation from the perspective of both the individual and the society as a whole.

This assessment is based on the following four points:

Each state was graded on these four points and then a composite score was determined for rating the states. The results of these ratings showing how well the states stack-up in terms of the economic impact of their transportation system is given in the map below.

In addition, New York State is much less dependent on the federal government to support its total transportation budget – only 15% of its budget comes from the federal purse while Mississippi depends on the federal government to provide a whopping 41% of total transportation budget. But perhaps more telling is the fact that in New York State, over a 10-year period, the GDP grew at a rate 3 times faster than the growth in vehicle miles travelled. In Mississippi we actually had the perverse situation in which vehicle miles grew at a rate three times faster than the rate of growth in GDP.

One obvious factor that account for the difference between New York State and Mississippi is their disparate level of urbanism. To account for this important factor we used census data to divide the states into four categories ranging from the most rural to the most urban. Perhaps not surprisingly, the most urban states generally performed better on our index of the economic impact of transportation. However, there was still a large variation between the states in each category. For example, amongst the most rural states the percentage of household income spent on transportation ranged from 21% to 41%. This suggests that differences in state policies might be playing a significant role in the observed outcomes. 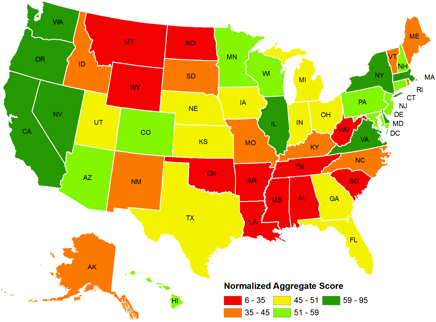 Most significantly we found that those states that had the most 'monochromatic' transportation systems (that is the ones with the highest amount of car use) scored the worst on our index. Those of you that are familiar with the map of obesity rate by states might notice some similarity between that map and our mapping of the economic impact of transportation. It is important to remember that the data we have mapped to date only includes the economic outcomes, which is only one of the three components of our Transportation Index for Sustainable Places. The other two components – the environmental and social (which includes health and safety impacts)– are not reflected in the results presented here. Our preliminary work in these areas suggests that the effects of transportation in all three areas are interrelated. Therefore, the similarities noted between our economic results and the obesity results is another reminder that we urgently need a broader framework for assessing the impact of transportation.

The CEOs for Cities research makes an important point about the fact that we need accurate measures of vehicle mobility if we are to develop better public policy. But the larger point is that we also need to understand that transportation is about much more than vehicle mobility. We need to have effective measures for assessing these broader impacts of transportation. Otherwise, our fixation on the mobility aspect of transportation will mean a continuation of local, state and federal policies that cost too much over the long run, wreck the character of our cities and damage the environment.

Norman Garrick, PhD is an associate professor of civil and environmental engineering at the University of Connecticut. He is also a board member of the Congress for the New Urbanism.