How many people live in California? The current count could be off by 1.5 million people, and a lot is riding on the results of the 2010 Census. Josh Stephens talks to planners and state leaders about the flaws in the Census and how they'll shape state policy.
April 8, 2010, 5am PDT | Josh Stephens
Share Tweet LinkedIn Email Comments 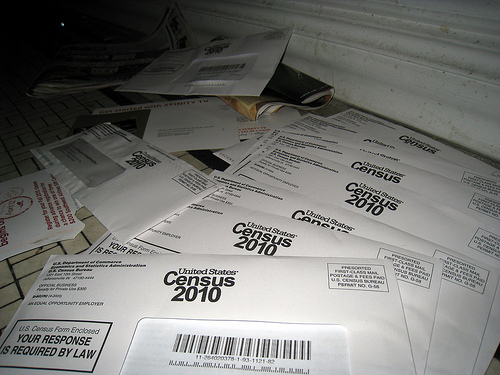 This month more Census forms will arrive in California mailboxes than in those of any other state. And, while anxieties about response rates and undercounts persist nationwide, it is likely that California will fill out and submit more of them than will any other state. In its rawest state, the resulting data will give planners their most fundamental piece of data – the sheer number of people the state must accommodate.

At the same time, this year's Census will lay some disputes to rest while, possibly, kicking up new ones that may persist for the next ten years.

The most pressing issue, therefore, for California's demographers and planners to find out exactly how many people live in the state – a figure that is currently disputed to the tune of 1.5 million people. That's the difference between the 38.3 million residents that the California Department of Finance estimated as of January 1, 2009 and the 36.7 million that the Census Bureau estimated at the same time. Though both figures are based on the 33.8 million logged in the 2000 Census they have diverged over the past decade due to differing estimates of domestic in- and out-migration.

That number is "unprecedented," said Hans Johnson, associate director at the California Public Policy Institute. "It's a phenomenal difference. There's no doubt that as a state our population growth has slowed compared to previous decades-the key question is how much."

Is California Losing or Gaining?
The desire to bridge this gap, and avoid the perennial threat of an undercount, has prompted cities across the state to embark on campaigns to encourage residents to respond quickly and accurately. April 1 was "Census Day," the official point of reference on which responses are to be based.

While Heim and others are curious to find out from the 2010 whether their numbers are correct, they of course carry more than trivial value. They will determine how many House seats the state will pick up – two if the state estimates are correct and none if the Census Bureau estimates are confirmed. The latter scenario would be the first time since 1920 that the state did not gain seats.

The data will also serve as the baseline for all future demographic projections conducted by the Department of Finance. Most importantly for local and regional planners concrete, the Census will provide authoritative figures on which to base everything from transportation models to the Regional Housing Needs Assessments (RHNA) process, which attempts to prescribe the amount and location of housing that a given region needs to accommodate population growth.

"That process looks at what kind of housing is there, what's the population, and that process depends on the Department of Finance's projections," said Gordon Garry, director of research and analysis at the Sacramento Area Council of Governments. "We're hoping that this Census bridges [the] divide between the Department of Finance and Census. For our RHNA process that's one less data problem."

Bye, Bye, Long Form
Other problems, however, may arise at a finer level of detail.

What the Census will not include is the long-form questions that have, since 1940, asked one-sixth of American households to reveal fine details about their lives. The long form was scrapped following the 2000 Census, so planners who are accustomed to relying on detailed, nuanced Census data to analyze and plan their communities may not get the detail that they expect.

"It's going to be the thinnest Census ever conducted," said Dowell Myers, professor of Urban Planning and Demographics at USC. "The most important thing for planning is the homeownership data. Except, first they threw our air conditioning, then they threw out bathrooms, now they've thrown out the whole housing unit. The only question left is, are you an owner or a renter?"

Instead, everyone will receive the standard Short Form, asking for age, sex, race, ethnicity, household size and homeownership. "That doesn't give planners a lot to work with," said Myers. From that data planners will be able to get occupied housing counts and derive average household size and vacancy rates, according to Heim.

More detailed information will come from the American Communities Survey, a monthly survey of 250,000 households nationwide that was fully implemented by the Census Bureau in 2006. The Census Bureau will be compiling three- and five-year averages of survey data – with the Census as a baseline – in order to replace the long form. However, even though the ACS is ongoing and not decennial like the Census, its comparatively small sample size has made some researchers wary of its reliability.

Because ACS takes only a sample of households, it will have a wider margin of error than will the Census, which is presumed to have a nearly perfect response rate. PPIC's Johnson noted that this sampling problem may affect small cities and counties more than it will large ones and put California at less of a disadvantage than it does more rural states. Even so, the absolute discrepancies and margins of error may be significant.

"I have real reservations (about ACS)," said Heim. "I think we don't totally grasp how you use five-year averages, three-year averages, and annual data. It's like a whole new world out there."

"That's a challenge for people who study things like poverty concentrations," said Johnson. "You cannot look at the Census to get that anymore."

Additionally, the short form obscures some data that planners consider crucial to creating the next generation of transportation plans. SACOG's Garry said that fine details about household demographics can have big impacts on travel patterns, thus making the combined data from the Census and ACS crucial to regional planning.

The Bigger Picture
"(Regional planning agencies) are going to be caught holding the bag figuring this out," said Myers.

"Our new travel models are much more travel-behavior based. We've gone to another level of detail," said Garry. "It turns out that the kind of household makes a big difference in the travel demand and how [residents] respond to how far away things are and job locations and what kind of transportation choice will they make."

Even with the "thin" short form and questions about how the ACS and Census will match up, demographers are hoping that the deluge of fresh data will answer lingering questions and confirm predictions about what has, by many estimates, been an usual decade for the state.

The Census may offer a macro-level account of the recession and foreclosure crisis by allowing analysts to extrapolate the rate of vacancies that have been caused by foreclosures.

"Are people doubling up?" said Heim. "Are multiple families in one housing unit?"

On the other hand, the Census may reveal less housing density thanks not to economic conditions but rather to the aging of the population and the settling of the state's immigrant population, both of which have a tendencytend to reduce household sizes. The numbers may, therefore, indicate a trend that would give smart growth advocates pause.

"One reason density has increased in the past wasn't that we were building more housing units but that we had more people living in housing units," said Johnson. "Over time as immigrants adapt to life in the United States they might start living in smaller households."

Moreover, Heim noted that elderly residents are becoming a larger percentage of the state's population. They tend to live alone or in pairs and therefore have less per-unit density than would nuclear families. Eventually, however, those homes will turn over. Concerns therefore persist about the combination of demographic and economic trends and the ability of the next generation of would-be homeowners to fill the state's existing housing stock.

"The projections are interesting but also threatening," said Myers. "Older baby boomers are going to be selling, progressively. Are there going to be enough younger homeowners to pay for that built-up equity over the past few decades?"

Statewide, the Census will assign hard numbers to the trends that have defined the state's development over the past ten years.

"Things that I'll be looking at include changes in inland vs. coastal areas, north vs. south and some of the regional patterns," said Johnson. "And looking specifically at what were the big changes in terms of racial and ethnic mix? How much have cities been transformed?"

From there, California's planners can begin to think about how the state will-and should-be transformed in the next ten years.