Watch: How Induced Demand Explains the Vicious Cycle of Congestion

Why Is Fare-Free Transit The Exception Rather Than The Rule?

Transit agencies spend a lot of money to make money. In many cases, the amount spent equals or even surpasses the amount they bring in from fares. So why charge them at all? Dave Olsen takes a look at Fare-Free transit, what's holding it back, and how to make it a reality.

Because I've been researching and well, dreaming, of Fare-Free Transit for well over a decade now, it seems like its merits and strengths are so obvious that only a fool would overlook it.

Of course, there are no fools running our public transit organizations around the civilized world; rather, many have Master's degrees or better and take their work very seriously (some may even say too seriously).

Whether by chance or luck, I've also taken a similar path, completing a Master's degree and in so doing, learning how to run a transit organization. I didn't actually run one, of course, but my theoretical adventure in the classroom sure was fun (at least in part because not one bus rider called in to complain!).

What I did learn was that there is only one way to run a transit system. And that, I believe, begins to explain why Fare-Free Transit is the exception rather than the rule.

I'm not sure from whence the idea of Fare-Free Transit came to me, but I've since discovered that it not only works but works extremely well when implemented with the same vigour as fare-based systems.

Hasselt, a small city in Belgium, is one of the best examples of how to convert existing fare-based systems, especially run-down or underfunded systems, to Fare-Free. Not surprisingly, the decision to convert to Fare-Free was a political one. The new mayor and council decided that pouring more money into the endless money pit we call roads and highways was not going to get them re-elected. Yes, you read that right.

Instead of spending billions more on a third ring-road/freeway, they commissioned a complete transportation plan that took space away from the already congested car driver and gave it to the timid cyclist, nature- and shopping-loving pedestrian, and eternally patient bus rider.

The USA, meanwhile, is home to one of the best examples of starting up a transit system from scratch, Fare-Free or otherwise: Island Transit on Whidbey and Camano Islands (and now beyond) in Washington State.

Before start-up, their first executive director did some comprehensive research into the costs of collecting fares. He discovered that the costs were similar to the projected revenues, so they decided to stay true to their mandate: to get people onto public transit.

Soon after, Martha Rose came to the helm of Island Transit. More than 20 years later, she's still there and the system continues to be proudly Fare-Free. In that time, she has had to withstand intense political pressure at both the state and local levels to convert Island Transit to the "norm", but despite funding cuts and personal attacks, ridership and routes continue to grow.

At every level - inside staff, maintenance staff, operators, buses, solar-powered bus stops, and park and rides (every one of which includes covered bike parking), Island Transit's system shines. The refreshing absence of advertising anywhere in the system definitely adds a large part to that shine, but ask anyone who works at or uses Island Transit why they support it so strongly and the overwhelming reason everyone gives is the simple fact that it is free to use.

Now given that public transit is a public service, it could make sense to maximize the public good that that service brings, which is exactly what Island Transit and other Fare-Free systems have done. However, I'm writing "could" here because in the mad rush to privatize and maximize profit for anything that moves (including public services) this playing field has been fundamentally altered over the past few decades.

In particular, public transit has suffered from this economic mis-focus, and ironically enough, it has only worsened perennial problems like chronic underfunding and running incomplete systems that can't compete with the private automobile.

Interestingly (but also sadly), my research continually brings out how little the stewards of our public transit systems know about the costs of fare-collecting in general, but especially as they pertain to their own systems.

Rare is the system that has taken the time to look and actually calculate: the last one that I'm aware of that did this (in Skagit County, Washington) discovered what Island Transit did almost 3 decades ago: that collecting fares is as or more expensive than the revenue it brings in. 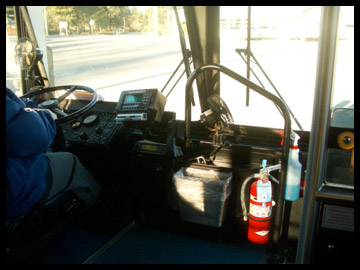 A bus in the Island Transit system -- with no fare box.

Imagine any corporation or even neighbourhood co-op that didn't know how much it cost to run their business enterprise! But that is indeed the "norm" in the public transit world and it sheds more light on why Fare-Free systems are the exception rather than the rule.

So instead of maximizing the public good that transit exists for (read: spending our transportation taxes on transporting people, which gets their cars off of our congested streets), our purveyors of public transportation are consumed with revenue-passengers and ways and means to squeeze every last cent out of people that are doing the "right" thing: Turnstiles or more buses? Smart cards or more buses? Transit Police or more buses? Legislation to criminalize transit users or more buses? And when exactly can fares be raised again?

Imagine if the questions posed were instead: what will bring more people onto our system? How can we make it more convenient to use? How can we grow our system every year? How can we coordinate/integrate better with other transportation systems?

If you've been saying, "sure, but what about funding? If you take the farebox away, how do we pay for our system?", you're definitely not alone.

There are many different ways to fund any public transit system. The farebox is one and ranks at or near the bottom of reliability. Cut back service? Down goes revenue. Increase fares? Down goes revenue (it's the Simpson-Curtain rule). And one day, our service providers may even know how much net revenue is actually being collected by their fareboxes.

On the Fare-Free side, Island Transit uses a sales tax to fund its operations. For every $100 spent in Island County, 60 cents of tax is collected and sent to them via the state taxation system. They know how much comes in, and they know how much is spent collecting it: nothing!

Hasselt in Belgium uses a property tax and guaranteed federal funding. Approximately 1% of the civic tax base is devoted to their transit system, which covers 25% of its cost. The remaining 75% is covered by the federal government through a long-term agreement. Residents of Hasselt now pay less tax overall than they did previously when their transit system used fareboxes and their city catered primarily to the automobile.

With the Olympic Games coming to Vancouver in 2010, that city's staff has proclaimed the need to reduce traffic by 35% during the games themselves. Melbourne in Australia accomplished this and more during the Commonwealth Games recently held there by making their transit system Fare-Free. Vancouver's plans did not include making the system Fare-Free. Rules are rules, you know.

They do have experience with Fare-Free though: after a 4-month lock-out, Vancouver's transit system (aka Translink) ran Fare-Free for 3 days. The jam-packed bus riders loved it, as did the drivers, who are still astonished that they were able to keep on time all shift long. Compare that to a recent trip I took on a so-called "Express" service: it took more than 15 minutes to load its passengers, all of which - if the system was Fare-Free - could have boarded through 3 doors and sat down in less than a minute.

More recently, Translink has been overwhelmed with the success of the U-Pass, a mandatory but deeply-discounted transit pass first issued at two large universities (the Univerity of British Columbia and Simon Fraser University). Despite its success, and the success of a similarly discounted Community Pass that is only available to a select few residents at SFU, Translink also shows no signs of extending these pass programs to the general public - i.e., essentially going Fare-Free - now or during the upcoming games. They have stated repeatedly over the years, however, that they are committed to spending hundreds of millions of public dollars on smart card technology (instead of on hundreds of needed buses), all the while continuing to pass up potential passengers with overcrowded buses.

Because I know the Vancouver area well, I've calculated a funding system for its transit system that would more than double the current operating budget and provide yearly funding for new transit vehicles; this same funding mechanism could be used in any urban area with similar results. Its beauty is its simplicity: employers pay $1 per day per employee that travels to the workplace. Telecommuters are exempt and small companies pay less than big companies. But notice that the funding comes from where the money is and will continue to be, unlike many current transit funding schemes that tax gasoline or cars.

Just imagine your transit system removing the farebox and funding transit in this way: anyone that could would get out of their car, climb on the bus (assuming your transit system prepared for this mass influx appropriately) and not only get to work on time feeling refreshed, but go shopping, playing, visiting, learning and generally rejoining their community, all for free! Corporations wouldn't even notice the added cost (despite their wailing) and businesses could convert some of their existing employee parking to bike parking and use the rest of these expensive asphalt properties that they don't sell to developers for more customers and clients, who now would travel without congestion.

The possibilities for urban renewal are many and vast, and -- added to the need to critically reduce our carbon output and the epidemic of death and injury by automobile -- it makes Fare-Free Transit a planner's and politician's tool like no other.

Perhaps the last piece to this puzzle of why Fare-Free Transit is the exception rather than the rule comes from the early work of author Daniel Quinn. He has helped me understand why our culture is stuck in its belief that there is only one right way to live, and all must adhere to it. So, it seems, with transit planning. Derrick Jensen's work on the other hand, speaks boldly and clearly about why we simply have to change our ways in order to stop the insanity that is destroying our own planet. Fare-Free Transit can't stop global warming alone (the US military alone spews half of all the greenhouse gases we create as a species), but if more of us had this kind of bus to get on, one can only guess at how far it would take us toward creating the change that our children need to survive.

Dave Olsen has written many articles about Fare-Free Transit, including a five-part series which originally appeared in The Tyee. He is a car-free, single parent who writes a blog about related transportation issues, and runs his own consulting company when he isn't building cob houses.

Watch: How Induced Demand Explains the Vicious Cycle of Congestion