Smart Growth at the Grassroots, Part 2

<p><strong>Rethinking College Park</strong> </p><p><a href="http://www.flickr.com/photos/rethinkcollegepark/389600607/" title="Route 1 by RethinkCollegePark, on Flickr"><img src="http://farm1.static.flickr.com/144/389600607_46aace7f11_m.jpg" alt="Route 1" hspace="5" vspace="5" width="240" height="180" align="right" /></a>Is College Park, Maryland a great college town? Although the town is home to a top-ranked national research university that is one of the largest employers in the state of Maryland, the town pales in comparison with the nation&#39;s best-liked college towns, whether Ann Arbor, Michigan, Ithaca, New York, or Charlottesville, Virginia. In this post I describe <a href="http://rethinkcollegepark.net/blog/">one attempt</a> to use the internet to improve an aspiring college town. </p> 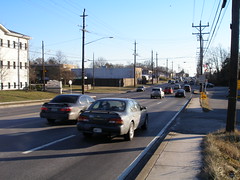 Is College Park, Maryland a great college town? Although the town is home to a top-ranked national research university that is one of the largest employers in the state of Maryland, the town pales in comparison with the nation's best-liked college towns, whether Ann Arbor, Michigan, Ithaca, New York, or Charlottesville, Virginia. In this post I describe one attempt to use the internet to improve an aspiring college town.

Visitors and residents alike complain of a derelict, low-density downtown, auto-oriented building design, shortages of student housing, and unsatisfactory retail and dining options for the tens of thousands of residents, students, and visitors. A scathing cover story in the Washington area alternative weekly newspaper titled "Shell of a Town" characterized the city's primary residents as beer-guzzening 18-year-old college students, and derided the town as possessing the "locational charm of a highway rest-stop." One letter to the editor written in response to the story boasted of the ethnic restaurants nearby -- two towns away.

Could the problem be a lack of ideas? The town is home to well-educated residents, students, and university faculty. The university's School of Architecture, Planning, and Preservation has generated huge numbers of of reports, studies, and concepts for a variety of sites in College Park. Recently the school ran a citywide charrette, and has been heavily involved in planning in Greenbelt (located adjacent to College Park). Clearly, there's no shortage of good ideas. 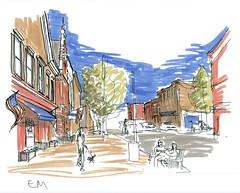 Is it resources? From the county's perspective, College Park is an extremely desirable neighborhood with stable neighborhoods, low unemployment, high property values, and well-educated residents, many whom commute to professional jobs elsewhere in the region. The county has a large planning department and the city itself (with no zoning authority) employs three full-time planners.

Perhaps it's a lack of good planning? The College Park area has 14 active plans, all encouraging well-planned pedestrian friendly design. The university has a sophisticated facilities planning department and hired a nationally recognized firm to complete the latest facilities master plan.

Maybe it's the developers? Thanks to the region's Metrorail system and strong economy, we can boast a variety of excellent private developers, many specializing in urban revitalization, smart growth, and New Urbanism. Washington, D.C. has a hot real estate market and high-quality urban neighborhoods from dense D.C. neighborhoods to leafy suburbs in upper Northwest to provide models for good urbanism.

At Rethink College Park, we've identified what we think are some of the primary causes.

First is the sheer geographic complexity involved. As this map shows, just a few miles around campus there are nine different incorporated towns and several unincorporated areas. Under Maryland law the incorporated communities have some authority and play a review role in development issues, but major functions like schools and zoning are administered by the county. These political and social divisions result in a parochial perspectives, and each pursue different goals for their towns. 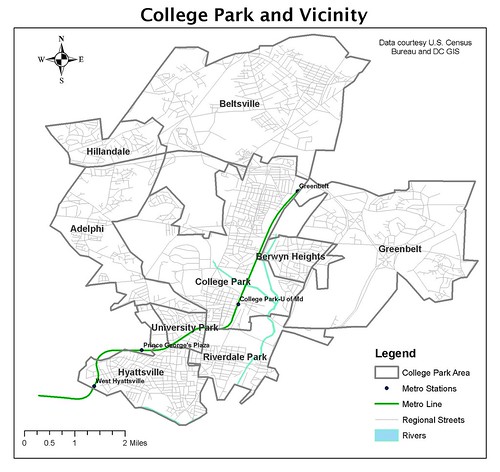 Second, even within College Park itself, planning and development are poorly coordinated. The city and the university have a notoriously poor relationship rife with mistrust and miscommunication. Within the university, the goals of upper administrators, students, and faculty are sometimes at odds. Finally, the relationship between all of these groups and the county, which has final approval on planning issues, is uneven at best. The county represents a vast area, and their headquarters are physically removed over 30 miles away.

Lastly, there is the simple lack of accountability for all involved thanks to the lack of readily available public information. The city is the most accessible, but has limited authority in the process. The university pursues its own goals, largely insulated from meaningful public involvement. The student newspaper covers these topics inconsistently, and the town's weekly publication isn't widely read enough or have the depth of coverage needed. A good example of the lack of accountability was the Mazza student housing project. Located on vacant land just up the street from campus, the project would provide badly-needed housing for 500 graduate students, a particularly under-served community. However, after a developer spent millions planning the project, acquiring the land, and moving through the complex and lengthy approval process, it was held up at the last minute by a single county council member, Thomas Dernoga, who delayed the project for many months. Only after Rethink College Park's efforts sparked community political pressure did he release the project and allow it to move forward. However the long delay may have proven detrimental: the project has not broken ground with the costs of construction and financing rising rapidly.

None of these problems seems likely to change for the foreseeable future. However, unlike many similar areas with these problems, literally billions of dollars of public and private investment has been proposed for College Park, ranging from the light rail link the Purple Line, the University's own mixed-use East Campus project, major new federal office buildings, and a host of private proposals. Will these projects be coordinated to realize a coherent whole? Without a significant change, it seems unlikely.

In order to address some of these problems I helped launch Rethink College Park in 2006 with then-undergraduate student David Daddio. We launched a combination reference website and blog, recruited volunteer writers and contributors, and began to assemble a huge volume of information about what was happening in College Park on a platform open to community participation.

Since July 2006 we've published over 300 articles in 60 categories by 9 authors, compiled 10 reference pages on various topics. The site has received 1,197 reader comments and averages over 200 unique visitors each week day. Our visual library of 517 images has been viewed 7,258 times. This year the city provided the site a $500 grant to offset our hosting fees. The site was recently selected as one of Planetizen's top ten planning websites of 2008, a recognition of the work of all who have contributed or supported the project in other ways.

Most importantly, our 2007 reader survey found we had succeeded in creating a forum frequented by the diverse constituencies in the town: our readers were 17% university students, 17% faculty and staff, 20% College Park residents, 25% UMD alumni, 4% development professions, and 15% other visitors. A majority - 59% - lived in College Park or an immediately adjacent communities. We also asked how many had contacted a city or university official after "learning about an issue on the website." 25% said they had contacted a city official and 20% contacted the university. An open-ended question revealed the site had become a highly valued resource, at least among a core group who completed the survey. One respondent said they thought the site was an "excellent forum" although "usually there is a bias toward good urban planning and smart growth practices."

Based on this and other feedback we have received, we feel we've achieved our primary goal of creating a forum for all community members, and activated a number of residents to become more engaged in the process. We also were able to influence public policy makers on several issues we identified for specific advocacy campaigns. Whether the site will have a larger impact on the type of development in College Park remains to be seen.

Despite the limitations of our approach, conventional roles filled by planners are often just as limited. Government planner's decisions are subject to the political process. Many award-winning plans by consultants are never fully implemented. Sometimes government planners and regulations themselves are the obstacles to Smart Growth. Our experiment suggests that new tools and an engaged approach could supplement conventional modes of professional practice.