When the novel coronavirus first surfaced in the New York metropolitan area in March 2020 and became the global epicenter of the pandemic, cities, particularly dense ones, were linked intrinsically to infections. But health experts knew it was a matter of time before the virus would hit America's rural heartland.

"The virus not only doesn't respect national or state borders, but it also doesn't limit itself to just cities," said Dr. Ashish Jha, then-director of the Harvard Global Health Institute. [Cited from the related post, "Will the Coronavirus Spare Rural America? April 13, 2020].

"Obviously suburbs and rural areas are less dense, and that doesn't mean that the virus isn't coming, it just means it's going to come a little later, and that it's going to spread a bit more slowly."

Referring to the rural areas, that time came last fall, initially in the Midwest, particularly North Dakota, but would eventually overtake most of the nation in both metro and no-nmetro areas during the deadly winter surge.

Keeping track of the rural spread of the virus and comparing it to metropolitan spread has been the Rural Policy Research Institute, located in the College of Public Health at the University of Iowa.

It released its initial white paper on March 26, 2020, a week after California Gov. Gavin Newsom issued the nation's first stay-at-home order to mitigate the spread of the coronavirus. The white paper launched a series of weekly data briefs to track the "nonmetropolitan and metropolitan spread of the disease."

Rural Americans are dying of covid at more than twice the rate of their urban counterparts — a divide that health experts say is likely to widen as access to medical care shrinks for a population that tends to be older, sicker, heavier, poorer and less vaccinated.

Since the pandemic began, about 1 in 434 rural Americans have died of covid, compared with roughly 1 in 513 urban Americans, the institute’s data shows. And though vaccines have reduced overall covid death rates since the winter peak, rural mortality rates are now more than double urban rates — and accelerating quickly.

Part of the problem is that covid incidence rates in September were roughly 54% higher in rural areas than elsewhere, said Fred Ullrich, a University of Iowa College of Public Health research analyst who co-authored the institute’s report. He said the analysis compared the rates of nonmetropolitan, or rural, areas and metropolitan, or urban, areas. In 39 states, he added, rural counties had higher rates of covid than their urban counterparts.

Subways were initially linked to coronavirus transmission early in the pandemic. In the highly infectious and deadly Delta surge, the spotlight has changed to rural areas.

“There is a national disconnect between perception and reality when it comes to covid in rural America,” said Alan Morgan, head of the National Rural Health Association. “We’ve turned many rural communities into kill boxes. And there's no movement towards addressing what we're seeing in many of these communities, either among the public or among governing officials.”

Weber also reports on the analysis of vaccination rates in metro and non-metro counties by The Daily Yonder, a digital news website published by the nonprofit, nonpartisan Center for Rural Strategies. Lower vaccination rates in rural counties make residents vulnerable to worse health outcomes than their urban counterparts and likely increases transmission rates. 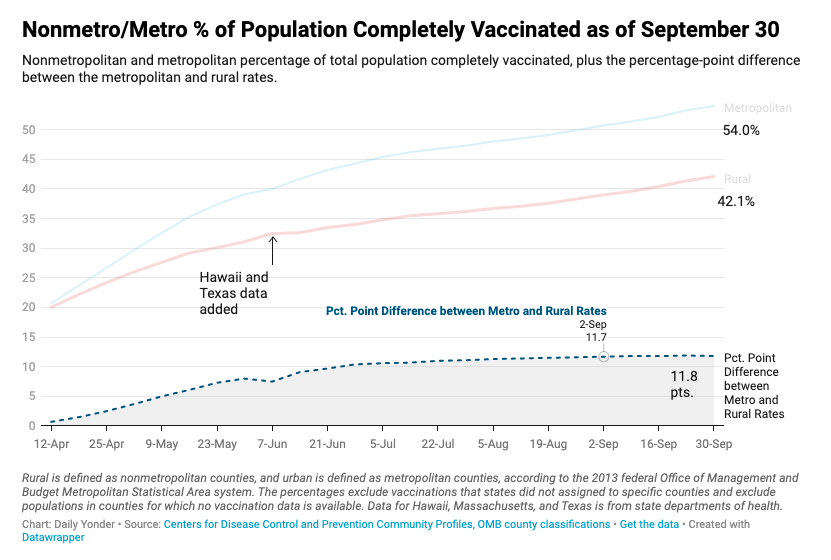 "As of September 30, 42.1% of the nation’s rural population was fully vaccinated," write Tim Murphy and Tim Marema in their analysis dated October 4, 2021.

In metropolitan counties, 54.0% of the population is fully vaccinated.  The gap between the rural and metropolitan vaccination rates remained steady at about 11.8 percentage points.

Weber reports on the other factors affecting access to health care in rural areas.

[S]ince 2005, 181 rural hospitals have closed. A 2020 Kaiser Health News analysis found that more than half of U.S. counties, many of them largely rural, don’t have a hospital with intensive care unit beds.

Another factor is nursing shortages which ironically may be exacerbated by the Biden administration's new vaccine mandates that apply to health care facilities that receive Medicare and Medicaid reimbursement. Weber cites one rural hospital in northeasternTexas where the vaccination level among staff is 50%, though it's 13 points higher than the county.

FULL STORY: Covid Is Killing Rural Americans at Twice the Rate of Urbanites