The History of GPS—Back to the First Century
April 15, 2014, 1pm PDT
A new book details the primitive origins of the GPS tracking technologies that are so pervasive in today’s mobile-phone-enabled world.
Mother Jones
Resurrecting Ancient Cities from the Dead
April 17, 2013, 5am PDT
Rather than continually build new towns on the outskirts of today's cities or struggle with creating a sense of place in newly constructed environments, could we resurrect old settlements to connect the old with the new?
Humanitarian Space
Sprucing Things Up on the Wrong Side of the Tracks
May 16, 2012, 8am PDT
Will French takes a look at the success of Birmingham's downtown revitalization, which – in the absence of a waterfront – embraced its historic railroads, instead.
Urban Land
What's Left for Venice in Its Golden Years?
May 16, 2012, 5am PDT
Josh Stephens muses on the modern state of an erstwhile global capital that has kept its aesthetic charms, but lost its <em>anima</em>.
Next American City
Berlin's Answer to Gentrification, Circa 1980
May 3, 2012, 1pm PDT
Christine McLaren considers the history of urban housing in Berlin, and reveals a long-defunct program designed to address a problem faced by countless communities today.
BMW Guggenheim Lab
Top 8 Facadist Renovations, from Melbourne to Bucharest
February 4, 2012, 9am PST
Facadism is often criticized for its awkward juxtapositions, but here are eight of the nicest facadist renovations from around the world, according to Stephen Smith.
International Business Times
Feature Doc on Urban Design Out Soon (Trailer)
September 23, 2011, 9am PDT
Urbanized is a feature-length documentary about the design of cities, which looks at the issues and strategies behind urban design and features some of the world’s foremost architects, planners, policymakers, builders, and thinkers.
urbanizedfilm.com
Why Did the U.S. Allow Its Cities to Decline?
August 3, 2011, 2pm PDT
Frank Gruber asks, "why, not how." Many of the explanations for decline are clear; why it was allowed to happen, less so. Gruber highlights "suspects" of what might have led to cities' destruction.
The Huffington Post
Could Classic Hill Towns Be a Model for Town Planning?
September 27, 2010, 8am PDT
In classic hill towns, people showed innovation and dynamic placemaking--lessons learned for urbanism in the new century, says Chuck Wolfe.
myurbanist
Blog post
Plans, Places, and Processes: Do You Need to Travel to Understand Them?
August 31, 2010, 12pm PDT

In recent blogs I have written about places and plans in many different locales and through time. Students often ask, “do I need to visit places to know about them”?

Ann Forsyth
Blog post
Planning History: A Few of the Late 19th and 20th Century Places you Should Know
July 3, 2010, 10am PDT

Earlier blogs have explored books and journals for finding out about the basics of planning history. In this blog I add to this by listing a just few of the places it is important to recognize as a planner. It is of course difficult to make such lists but students ask for them with some frequency. Of course, places are one thing and planning processes quite another--and in planning process is very important. Upcoming blogs will deal with plans and processes.

Diana DeRubertis
Blog post
Public Options in Transit and Health Care
November 5, 2009, 10am PST
Michael Lewyn
From Memories to Master Plans
October 18, 2009, 5am PDT
Maine mill town asks citizens to record their memories at downtown "Heart Spots" as part of the master planning process.
The Journal Tribune
NY's Subways Could Have Been Moving Walkways
August 6, 2009, 2pm PDT
A century ago there were plans to supplant much of Manhattan's metro system with subterranean moving walkways. This article looks at the history.
New Scientist
How Did We Get Here?
July 26, 2009, 11am PDT
In an interview, Rep. Jim Oberstar gives a retrospective of American infrastructure funding and talks about the need to consider transportation in light of the "post-interstate era."
PBS: Blueprint America
Blog post
A Fable About Sprawl
July 20, 2009, 3pm PDT

Once upon a time, there was a city called City. And everyone living in City voted in the same elections and paid taxes to the same government.

And then 5 percent of the people decided that they wanted to live in an new neighborhood that was opened up for development by the highways. And they called it Richburb, because they were, if not rich, at least a little richer than many of the people in the city (since even if there wasn’t zoning to keep the poor out, new housing usually costs more than old housing anyhow). 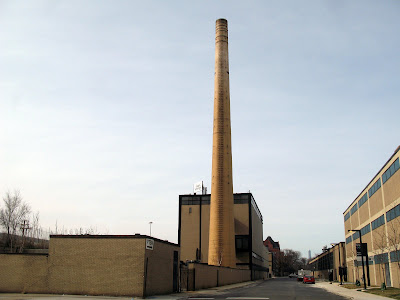 See the building and the walls in the lower left?  They're designed by Ludwig Mies van der Rohe.  They're part of the ensemble he designed at the Illinois Institute of Technology (IIT).  Mies and his office designed this corner around the same time they were designing the masterpiece on campus - Crown Hall.

Last week I attended the Society of American City and Regional Planning History (SACRPH) conference in Portland, Maine. The conference attracted a variety of notable planners and historians to my hometown for sessions on everything from radical 1970s public participation exercises to best practices in waterfront planning.

At the conference, outgoing group president and historian Greg Hise gave a provocative lecture titled “Whither the Region, or Why Ought There to Be an ‘R’ in SACRPH?” In the talk he described how he believed there was a declining interest in the organization in studying regions, pointing out that the word was declining in use in the titles of papers presented at recent conferences.