As Hurricane Irma bore down last week, Miami-Dade County Mayor Carlos Gimenez called for a mandatory evacuation of all barrier islands, including Miami Beach, "as well as those living in low-lying areas along the South Miami-Dade coastline," reports Jerry Iannelli for the Miami New Times. The order went into effect on Thursday, September 7.

Barrier islands: no place for development

In the U.S., barrier islands exist from Maine to Florida on the Atlantic coast and Florida to Texas on the Gulf Coast. In Florida, Miami Beach is separated from the Miami-Dade County mainland by Biscayne Bay. On its eastern shore is the Atlantic Ocean. 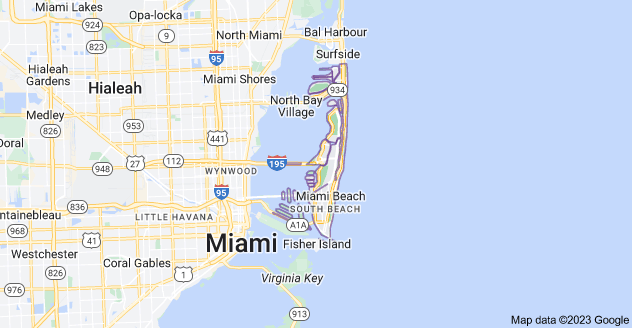 Barrier islands serve a critically important ecological purpose by preventing ocean swells and other storm events from disrupting water systems on their mainland sides, protecting the coastline. "As the first line of defense during storms that threaten coastal communities, barrier islands are very important for reducing the devastating effects of wind and waves and for absorbing storm energy," according to the National Oceanic and Atmospheric Administration (NOAA) of the U.S. Department of Commerce.

A science webpage is even more to the point: "[B]arrier islands are fragile, constantly changing ecosystems that are important for coastal geology and ecology. Development has posed dangers to these ecosystems and has also increased the risk of property damage every year from hurricanes and Nor'easters."

Given barrier islands' critical protective role, should a city of 92,000 people exist on a mile-wide island "averaging only 4.4 feet (1.3 m) above mean sea level hurricane storm surges "could reach 10 feet?"

Storm surge is not the only environmental problem facing Miami Beach. According to NASA, sea level rise by the end of the century could "range from 0.2 meters to 2.0 meters (0.66 to 6.6 feet)". In South Florida, it could be as much as "two feet over the next four decades," according to Yale Climate Connections.

A history of flooding and destruction

"In the hundred years since [Miami Beach] was incorporated as a city, it has repeatedly been pummeled by major storms, one of which, the Great Hurricane of 1926, wiped out buildings, tossed ships ashore, and remains, in adjusted dollars, the costliest hurricane in American history," wrote David Kamp for Vanity Fair in December 2015. But even on sunny days, high tides can push water up through storm drains and flood city streets.

Those who monitored Hurricane Irma's South Florida approach may have seen interviews of Miami Beach Mayor Phillip Levine, particularly as he implored residents to leave the island. Levine has spearheaded programs to both mitigate flooding and adapt to climate change, wrote Kamp.

Levine models himself after Michael Bloomberg, New York City's mayor from 2002 to 2013—as a first-time officeholder whose wealth and outsider status allow him to bypass an entrenched political culture of intransigence and inaction. After he took office, in November of 2013, Levine fast-tracked a program to install electric pumps along Alton Road and other prime flooding spots on the city’s west side so that, during a storm surge or high tide, the pumps can be switched on, suctioning water off the streets and out into Biscayne Bay.

See Miami Herald video on the pumps (which have their critics) to reduce flooding and roads which have been raised to adapt to sea level rise. Levine and his staff clarified that the pumps will be useless during Irma's storm surge. Their utility will be proven after the surge subsides.

A December 2015 post also distinguished Levine from the state's other leaders, "like Governor Rick Scott and Senator Marco Rubio, who have both proven staunch in opposing [policy] responses to climate change, and to the large-scale interventions that will be necessary for the region to remain habitable in the future."

Of course, Miami Beach doesn't face the perils of sea level rise alone. Shortly after Hurricane Harvey flooded Houston, Oliver Milman, an environment reporter for the Guardian, wrote about how Miami Beach and six other U.S. cities deal with the risk of flooding.

The entire southern section of Florida is at risk from climate change but Miami Beach is eyed with particular concern by other cities. After all, if this wealthy area can't engineer its way out of trouble, where can?

As Irma leaves the Caribbean and heads for Florida, with landfall expected this weekend, there is a lot to worry about: New building codes will be put to test, fuel to evacuate is in short supply, and cranes have not been dismantled.

46 minutes ago - U.S. Department of Housing and Urban Development