"The question came from town hall audience member [and media sensation] Ken Bone," reports energy historian Ellen R. Wald for Forbes on the Oct. 9 debate held at Washington University in St. Louis. "He asked the candidates to discuss how their policies would strive to meet U.S. energy demands while simultaneously protecting the environment and preventing job loss in the fossil fuel industry."

Hillary Clinton said, “You know that we are now for the first time energy independent. We are not dependent on the Middle East, but the Middle East controls a lot of prices.” [See CNBC video covering energy policy and jobs].

She is wrong about U.S. energy independence but right about oil prices.

When it comes to petroleum, the tide is going the wrong way for energy independence. In 2015, the U.S. consumed 19.4 million barrels of oil daily.

"The United States imported 9.4 million barrels [per day, or bpd] of crude and petroleum products in 2015, and imports are on the rise this year, according to U.S. Energy Information Administration [EIA] data," writes Tom DiChristopher for CNBC. "Of the 2015 total, 2.9 million [bpd] came from OPEC countries, and 1.5 million [bpd] came from Persian Gulf countries."

"During the first half of the year, the U.S. Energy Information Administration, part of the Energy Department, said total crude oil imports increased 7 percent year-on-year," reports Daniel J. Graeber for United Press International (UPI) on the data posted Oct. 21. "The increase marks a first since 2010, when imports started to decline in response to rising domestic output." 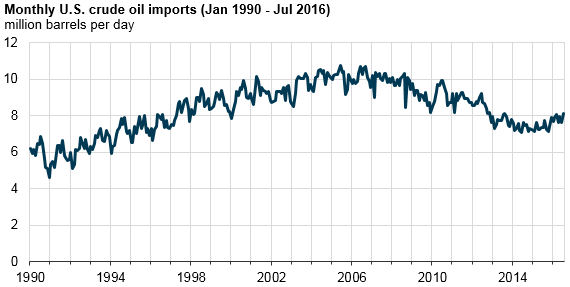 One reason political leaders have made energy independence a priority to be less reliant on unstable Mideast oil sources, as well as other OPEC nations that can control prices, as Clinton correctly claimed on Oct. 9. But the news is even worse in that regard, as the largest increase came from those sources.

"[I]mports from members of the Organization of Petroleum Exporting Countries increased by 504,000 barrels per day, making up the bulk of the new oil entering the U.S. economy," adds Graeber.

The reason for the increased imports is that a narrowing in the "price differences between U.S. crudes and international benchmarks provided an incentive for increased imports by refiners in areas where imported crudes now had a delivered cost advantage relative to similar domestic crudes," according to the EIA.

In other words, Saudi Arabia's decision to let oil prices slide (at a November 2014 OPEC meeting) in order to maintain market share is working.

The Pulitzer Prize-winning website was kinder toward Clinton than Forbes' Wald. While rating Clinton's claim as 'false', it included an EIA reference that showed that when considering all energy sources, Clinton's claim might be achieved, but not during her term should she be elected.

Had Clinton just referred to natural gas, her claim would have been correct. Furthermore, thanks to Liquefied Natural Gas, exports will increase greatly.

"Sometime in 2017, for the first time in 60 years, the U.S. will likely sell more natural gas to the world than it buys," reports Naureen Malik for Bloomberg Businessweek. "Next year, capacity to export liquefied natural gas from the lower 48 states, chilled to –260F so it can be shipped by tanker, will more than double, to 3.2 billion cubic feet per day."

FULL STORY: Getting it Right on U.S Energy Independence

Oil independence, a goal set by President Nixon in the depth of the 1973 energy embargo, was achieved in the last week of November thanks to a fluke in record keeping as well as an "unprecedented boom in American oil production."