Winds of Change Blow Through APA 2012

<p> As the APA national conference draws to a close after four days of connecting, collaborating, and conversing, another c-word has been running through my head -- change. Of course, introducing and disseminating change is the currency of such conferences, where sessions are intended to facilitate professional development and transition by introducing attendees to the progressive practices and policies being spearheaded across the professional world. I mean, why else would we attend such events? Surely not only for the raucous opening night party, right? Right??  </p> <p> However, it seems there was more than the usual dose of change in the air during this year&#39;s proceedings. </p>

As the APA national conference draws to a close after four days of connecting, collaborating, and conversing, another c-word has been running through my head -- change. Of course, introducing and disseminating change is the currency of such conferences, where sessions are intended to facilitate professional development and transition by introducing attendees to the progressive practices and policies being spearheaded across the professional world. I mean, why else would we attend such events? Surely not only for the raucous opening night party, right? Right??

However, it seems there was more than the usual dose of change in the air during this year's proceedings.

Change was evident in the session titled "Assessing the Future of Smart Growth", where Dr. Tim Chapin spoke of a new era in growth management policy, which he tentatively titled "Sustainable Growth" (and asked for recommendations for a better title).

Change is the realignment of public health and planning, which, you may remember from school, provided the foundational impetus for modern planning practice and policy, as Jeremy Nelson succinctly described at the "Using Public Health Data for Planning" session. 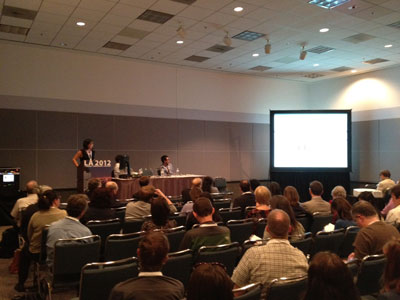 Change is the overflowing crowd, many still sweating from an exhilarating ride through the car-free streets of LA during the day's CicLAvia event, who showed up to hear Douglas Adams, Michael Lydon, and Stephen Villavaso describe how short-term action can lead to long-term change at the "Tactical Urbanism" session. 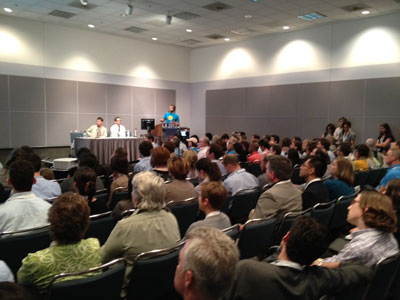 Change is the excelerating rate at which data and technology are altering the way planners interact with stakeholders, city systems, infrastructure, other departments and each other, as presented at sessions throughout the conference, including "Smarter Cities Through Data Literacy" and "Can SMART Solutions Create Better Places."

Change is the global, and local, demographic tranformation shaping our work today and for the future, represented in the Opening Keynote, where Los Angeles Mayor Antonio Villaraigosa described his majority-minority city as the future of U.S. demographic trends and APA President Mitchell Silver touched upon the coming "Silver Tsunami", as Baby Boomers retire.

Speaking of the Opening Keynote, climate change was the topic of noted scientist Dr. Andrew Weaver's talk, which focused on the overwhelming scientific consensus behind the human impacts on the changing climate and the divergent public perception of the problem and its causes. Changing responses to environmental and climatic transformation were also evident in sessions focusing on adaptation to what was once a dire prediction, and is now recognized as an urgent reality.

Change may have best been exemplified by the environs of the host city Los Angeles, where the infamous sprawling city of the automobile is reinventing itself as an increasingly urbanized bike-friendly, pedestrian-friendly, and transit-friendly metropolis. 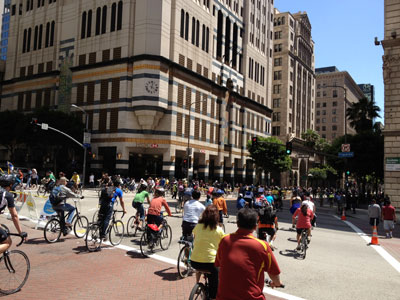 Lastly, there are the tremendous changes shaking the planning profession to its core, and forcing government agencies and consultant firms alike to reexamine their core services and business practices as planners are being asked to do more with less. "We're How Big" explored the increasing polarization of private practice into huge multidisciplinary firms and small agile boutique firms, and the attendant disappearance of stable mid-size firms. As Jeffrey Goldman, with AECOM, explained, change in planning practice is constant and accelerating. Perhaps this should have been the motto for the conference.

Participants at the "Changing the Business of Planning" session discussed the transformation of the public sector side of the profession. Laurel Prevetti, with the City of San Jose, described her department's evolving relationships with developers, stakeholders, and public officials as changing expectations have led to a culture shift from issue-driven outcomes to data and performance-driven outcomes.

While some of these changes to the profession would likely have occurred over time, the economic crisis has accelerated the pace and character of the transformation, and delivered a good deal of pain and discomfort in the process.

It's an interesting time to be practicing planning, to say the least, and while all of this change brings challenges and unease, it also brings excitement and opportunity.

Whatever direction these twists and turns take us, Planetizen will be covering it.

The city has made almost no progress on the mobility plan it adopted in 2015. Now, voters will decide whether, and how, L.A. will have to follow through.