Baltimore Transit Lagging Behind Other Systems

"Hoboken Daylighting" In Lieu Of Bump-Outs

So, I'm out at a site visit with the city engineer last week and we're talking about ways to implement curb extensions to reduce pedestrian exposure to vehicular traffic.  We're discussing inexpensive ways to accomplish this, and then on queue, as is the right and obligation of all civil engineers, the ugly villain subject of all things bumped-out rears its head: drainage.

So, I'm out at a site visit with the city engineer last week and we're talking about ways to implement curb extensions to reduce pedestrian exposure to vehicular traffic.  We're discussing inexpensive ways to accomplish this, and then on queue, as is the right and obligation of all civil engineers, the ugly villain subject of all things bumped-out rears its head: drainage.

If you've ever attempted to retrofit an intersection with curb extensions (a.k.a bump-outs), you're certain to have run into the havoc that an ill-placed catch basin wreaks on a good-intentioned, simple, concrete extension.  Oftentimes, catch basins and drainage paths kill a curb-extension retrofit because the relocation of catch basins triple or quadruple the cost of an otherwise simple implementation.  Oh, the frustration!  Although I can't offer any magic solutions - and there's just so much ARRA can do for you - there are some ways to get some bang for a lot less buck.

First up is something I have never tried myself, but saw implemented quite effectively in Arcadia, California, a bedroom community of Los Angeles.  I observed a streetscapes improvement project along their main street, which apparently ran into a potential deal-breaker when it was learned that to get curb extensions and extended planters, all the catch basins along the corridor would have to be relocated to avoid ponding.  Instead of throwing hands and scales in the air and leaving things to rampant speeders, some innovative soul came up with a solution that I have not seen used anywhere else, but could perhaps make life a lot easier for those of us looking to retrofit existing streets.  They simply designed short concrete spans as removable panels (presumably for regular cleaning) to serve as a bridge between the existing curb and the new extension "islands".  This effectively allows the design to work around existing drainage infrastructure, and avoids the huge costs needed to relocate catch basins.  I never had a chance to ask that city's administration about the pros and cons of this solution now that it's been in place for several years, but I suspect that sweeping out detritus and occasional vandalism ("Dude, like, I totally bet you can't lift that concrete panel there, you wussy.") are highest on the list.  Anyone see this somewhere else?

As you likely already know, among other things such as keeping pedestrians off the street and six inches higher, curb extensions are beneficial because they physically prevent cars from parking too close to, or within, crosswalks.  But in Hoboken, our budget status is so deep in the hole we're not allowed to play with concrete.  Our residential streets are tightly packed with on-street parallel parking that , despite state statutes prohibiting parking within 25 feet of the line, oftentimes creeps right up and into crosswalks.  Since it is nearly impossible to enforce this throughout the city all the time, and there simply is no money to build curb extensions, we were looking for a simple, inexpensive, and definitive way to prevent cars from parking too close to crosswalks.  Enter the lowly vertical delineator. 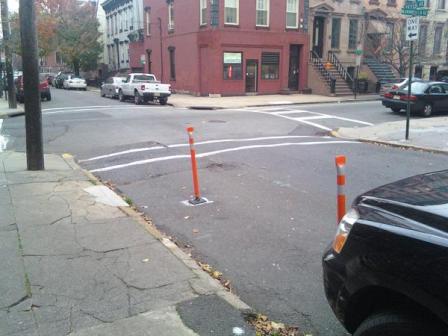 Step 1: Tow car illegally parked at or in crosswalk.  Step 2: Install first pole approximately ten feet from crosswalk and approximately four feet offset from the curb.  Step 3: Install second pole an additional ten feet from the first pole at same offset from curb.  Step 4: Repeat elsewhere as requested.  The beauty of this "Hoboken Daylighting" concept is that it takes ten minutes to install, costs $40, and effectively prevents all but the most absolutely hell-bent, obstinate parkers from infringing upon the sight-distance area critical for pedestrian visibility (Yes, some people indeed drive over these, as unbelievable as it sounds, but I suspect these desperate individuals are members of a vengeful sect that attempts to summon the spirit of Robert Moses every December 18th by smashing two chunks of macadam over a flaming can of Pennzoil, so don't be deterred.) 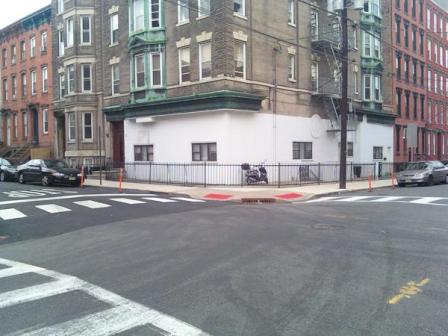 Hoboken Daylighting Is Installed Here For Both "Critical Approaches"

Again, it ain't pretty, but it gets the job done in a dense urban environment where enforcement must be supplemented by physical preventative measures at critical approaches.  When we first started this program a few years back, the poles were a bit unpleasant to look at because there was no laudable track-record against which to contrast their aesthetics.  But nowadays, function has overcome form, and Hoboken Daylighting is requested by residents all around town.  We're now using an NJDOT system called Plan4Safety to identify highest incident intersections to balance resident requests with critical safety locations, all on a shoestring.  Since intersections in Hoboken are typically the convergence of one-way streets, we typically only install Hoboken Daylighting on the "in" approaches, not the "outs".  This is because drivers need line-of-sight with pedestrians and other vehicles as they are entering an intersection (truck turning movements is another issue).  I hope this is helpful to those of you looking for quick and cheap ways to improve safety at critical corners.  If you have questions about Hoboken Daylighting, leave them in the comments below and I'll answer them as best as possible.

Baltimore Transit Lagging Behind Other Systems