Art, Agriculture, and Civic Identity Converge in the Great Plains

<p class="MsoNormal">MINNEAPOLIS--If not for the <a href="http://www.walkerart.org" target="_blank">Walker Art Center</a> I would have scant reason to spend extra time in Minneapolis.<span> </span>Minneapolis is not lacking for charm or culture, but it certainly falls in that middle range of American cities, somewhere between New York and nondescript, which is to say that it is not a destination in and of itself, yet it offers reasons to extend a stay for those who find themselves so far north for other reasons. </p>

MINNEAPOLIS--If not for the Walker Art Center I would have scant reason to spend extra time in Minneapolis. Minneapolis is not lacking for charm or culture, but it certainly falls in that middle range of American cities, somewhere between New York and nondescript, which is to say that it is not a destination in and of itself, yet it offers reasons to extend a stay for those who find themselves so far north for other reasons.

Minneapolis derives a great deal of pride from the Walker, 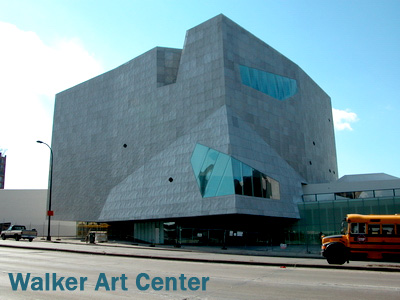 because of both its collection and its architecture, which comes courtesy of a relatively recent addition and redesign by Herzog and de Meuron. Without it, Minneapolis would be ever so much more stark, and I would be at a bar watching football rather than wandering galleries contemplating eternal questions. None of those questions, however, has anything to do with Minneapolis.

For an urbanist, exploring a new city means walking the streets, stopping into cafes, c

hecking out distinctive neighborhoods and downtown. It means riding light rail and discerning how the city's structure reveals its local culture, and, especially in Minnesota, its local climate and environment. (Sometimes it means getting off a bus, walking down a snow-crusted street at 8p.m. on a Tuesday eating mixed nuts out of a can, and reciting to myself the wisdom of the city's favorite son: "It's all in the experience.") Most of all, it means seeking out those features of landscape and local culture that differentiate it from anywhere else. No mean feat in Dick Cheney's America.

Though Minneapolis derives a considerable degree of its civic identity from the Walker – like many other cities and their own museums – I am hard pressed to discern a connection between the institution and the city beyond the coincidence of its presence in the city. I have my problems with its setting: standoffish in a park just off the shoulder of downtown. Its odd angles rise out of the snowfields in a perfectly pleasing manner. There is, however, nothing about the Walker that could not translate suitably to any other American city. Swap it for the Kimbell, L.A .'s MOCA, the Denver Art Museum, or even the Guggenheim Bilbao, and things would be pretty much the same (except I'd be dead, because I'd sooner impale myself on one of Daniel Libeskind's spires than find meaning in them). If only museums could loan themselves out to each other.

In a city known for Lutheran charm and its own species of nice, the Walker is neither home-grown nor nice. It's not nice in the sense that contemporary art rarely has anything nice to say, though I don't think nihilism and hopelessness has rubbed off too much on the folks here. It's not home-grown in the sense that it has nothing to do with the indigenous culture of the city. All art, it would seem, has been plundered.

Quite the opposite is true of the Mill City Museum,

which rises from the banks of the Mississippi like a ruin from an antique civilization. Minneapolis rose to prominence for reasons derived directly from geography and landscape: it lay amid the great grain fields of the Northern Plains, drew power from the fledgling Mississippi River, and sent its products down the same. In few places has industry and agriculture intersected so profoundly, with 26 mills at its peak churning out a breathtaking portion of the world's refined grain. This is why people brave the arrowheads of winter in America's icebox. The men and women who worked in the mills – roughnecks, immigrants, and Lutherans alike – were the bedrock of Minneapolis's vernacular culture, literally home-grown. They would likely be surprise to find out that the hot, explosive sentinels in which they toiled are not merely gone but instead teaching second-graders the wonders of hydropower.

The Mill City Museum's galleries display the artifacts of industry; they are captivating if not beautiful. Their meaning is as explicit as anything: Here men toiled. We salute their efforts and thank them for the city that arose on their backs.

By contrast, the Walker's collection – a broad array of Warhols and Rothkos and Klines and all the rest – is no more at home here than are the treasures of Pergamon in Berlin or the Elgin Marbles in London. Each has been plundered to the delight of alien populations. And each has been run up the flagpole to aggrandize their respective cities, build cultural currency, and attract discerning visitors.

But, while historical art may have been pried from walls and carried off under the barrel of a tank, high art is always about displacement. Anything that serious transcends place. High art is placeless and therefore has every reason to pop up wherever collectors see fit. Cities, of course, have seized upon this cultural liquidity to build institutions and amass collections in order to have their fair share of global cultural currency.

The works in the Walker have not been plundered from tribal homelands or the vaults of nations. They have been bought with hard cash, earned locally. American culture is commerce, and commerce has always been the most crucial catalyst in the creation of high art. So the pieces have been purchased and shipped out, and the Swiss architects hired and paid a fair price for them to contemplate a site and bestow their genius on the natives. The collection links Minneapolis with – not distinguishes it from – Ft. Worth and Denver and New York and Berlin and Paris itself. Their museums are like the tips of great fiber-optic filaments, rising to the globe's surface, shining the light of cosmopolitanism.

Ultimately, the Walker doesn't reflect anything about Minneapolis, except perhaps money and ambition, but ambition of the best kind. Its true value is far more active: it does not contain Minneapolis's culture; it creates it. The Walker creates a cultured Minneapolis in the same way that the YWCA creates a fit Minneapolis. The only formal difference is that the Walker's contents cannot be copied; whatever it displays, it denies to the rest of the world. It offers a forum for locals to come together, view, contemplate, discuss, and enjoy. For the tourist or the wayward attendee of the podiatry convention, none of this matters beyond a few hours of time well spent. But for the locals, it means everything. It means as much today as those mills did 80 years ago, when agro-industrial prosperity laid the groundwork for a crucial frivolities like art.

Since the Walker opened, the critical mass of locals who have visited the galleries, had images fused in their minds, and return to the restaurants, bars, and living rooms to find others who have seen the same things and no doubt formed radically different thoughts. The real Minneapolis takes place in those conversations: the space between one interpretation and another. That conversation is public, original, and, most importantly, indigenous.

Conrad DeFebre of Minnesota 2020 went to an exhibit about transportation at the Minnesota History Center titled "Going Places: The Mystique of Mobility" and found an overt bias against transit.