For many, the planning profession lost direction, credibility and apparent societal value during the last quarter of the twentieth century. Recently, this loss has been partially offset by an increased concern about planning for the environment. For both planners and many members of wider society, 'sustainability' has become the defining term to denote these wider environmental concerns and their appropriate responses. The striving for sustainability is now a defining principle of good planning practice. It provides an ideal for which to aim towards, even if its achievement, not to mention any universally shared and concise definition of how to achieve it, consistently appears to be located somewhere over the horizon.

More importantly, this ideal of a sustainable future, understandably, has wide public support. In a recent article in the Journal of Planning Education and Research, I argue that sustainability could well be planning's saving grace. It replaces the discipline's traditional role of protecting the societal common good with an even wider role of helping to save the planet for future generations – a role most planners and members of society, in principle, would want to readily support. Yet, in the same article, I argue that sustainability could also be planning's road to perdition, especially without careful reflection on the part of the profession and its practitioners as to how and in whose interests sustainability is deployed.

The Deceptive Use of "Sustainability" for Non-Sustainable Ends

Driven by concerns of the adverse impacts of global warming, the government of the United Kingdom recently appears to have jumped strongly on the sustainability bandwagon, as have many American states. Even the U.S. President in his recent State of the Union Address appeared to be shifting his perspective. This is to be cordially welcomed, but with care, for sustainability is a term that can be used to achieve non-sustainable political ends. 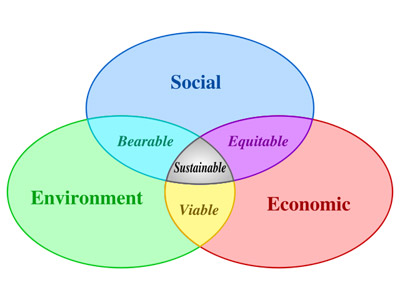 Sustainability, even if a fuzzy, ill-defined, concept, has now reached the near-universal status of being a desired concept of 'good'. Indeed, its very fuzziness allows multiple actors to have diverse and even conflicting interpretations of what sustainability means. Yet even in their disagreement all can agree that sustainability is, in itself, a good thing. Moreover, sustainability, in its perceived goodness, transfers its positive value of 'good' to other words or concepts when joined to them. Sustainable cities, sustainable communities, sustainable regeneration, sustainable practices, and sustainable transport, to mention a few examples, all bask in sustainability's reflective goodness. Consequently, sustainable development has arguably emerged as the dominant interpretation of how to achieve sustainability. This is through its triple-bottom-line approach of equally promoting and weighing, in a balanced manner, economic growth, environmental protection, and concern for social equity.

Yet I argue that the dominant focus of sustainable development, at least as stated in the published policies and plans of many institutions of government, is more concerned with sustainable growth than ecologically sustainable measures, such as averting global warming, limiting resource depletion and loss of biodiversity. Further, social issues are rarely given significant concern in what is theoretically supposed to be an equal balancing of the three dimensions: environmental, economic and social. This produces a very different policy response than the traditional planning policy of looking after the disadvantaged in pursuit of the wider public good.

In framing this argument, I explored case studies of Toronto, Canada; South East England; and Melbourne and Sydney, Australia. In each case, sustainable development arguments were used by governments to justify policies that were not necessarily environmentally sustainable, or even socially just. Rather they were policies to help position these metropolitan and regional areas to catalyze growth and increase global economic competitiveness. In each case, rather than attempting to nurture prospects for changing consumptive and productive behaviors in a manner consistent with the local and global carrying capacity (i.e. ecological sustainability), the sustainable development rationale was used by planning institutions to justify actions primarily supporting the entrepreneurial interests of each region. These were pro-market interventions that diluted the concept of sustainability to literally that of 'business as usual'.

This interpretation of sustainable development and the institutional support it receives comprises a new rationale, value, and, above all, clout for the planning profession. But it also risks maintaining existing social and environmental injustices, as well as producing new kinds of disparity and ecological squalor. These are injuries that arise from the developed world's continuing market imperative of growth and the perceived needs of competitive globalization. Further, it appears to make some environmentally committed planners, at least in the case studies examined, to appear to act as naive dopes in the interest of their institution's wider support of big business.

Re-Examining the Role of Planners

Planning practitioners need to carefully reflect on their role in fulfilling the political intentions of their institutions. Otherwise, planners may continue to conflate the triple-bottom-line of environment, social equity, and economy together in a manner that risks both the environment and social equity in the name of sustainable wealth creation for the dominant minority profiting from competitive globalization.

Mainstream planning's apparent complicity, if not outright acceptance of this materialist view of sustainability precludes what for this author should be sustainability's correct articulation and planning's role in its achievement. The balance of environment, economy, and social equity is a definition and role of sustainability that would make it planning's and the planet's true saving grace. This is an acceptance of an 'economy of enoughness' (as coined by Bill Rees at the University of British Columbia) where we accept that we should reduce the consumptive habits of the developed world. This requires us to reduce our ecological footprint to that which is sustainable for all global inhabitants – human and other – while ensuring equity in the sharing of this finite carrying capacity.

Planning, I suggest, can have, and should have, a central role in this achievement. But, to begin, we must endeavour to re-align our institutions from their dominant imperative of maximizing territorial wealth creation largely without regard for other concerns, and replace it with the fundamental aim of ecological sustainability. This is a difficult and inherently partisan task, but so be it, if we really desire a sustainable future.

Michael Gunder is a Senior Lecturer in the School of Architecture and Planning, University Of Auckland. His research interests lie in planning theory where he deploys post-structuralist critique in the interpretation of planning policy and practice. He is currently President of the New Zealand Planning Institute.

This editorial is based on an article that was originally published in the Journal of Planning Education and Research (JPER), Vol. 26, No. 2 (208-221). The full article is available online at Sage Publications.