Our annual list of the ten best planning, design, and development websites represents only some of the top online resources for news, information and research on the built environment. Every year, Planetizen recognizes ten websites as the best online resources for urban planning, design, and development. The annual list is based on nominations by Planetizen readers and staff and judged against a common set of criteria, including content, design, and usability. We've listed the websites alphabetically, not in an order of rank.

If you're reading this article, it's likely that you are already a regular visitor of sites like CityLab, Next City, and Wonkblog, and familiar with the great research and storytelling those essential resources produce on a regular basis.

This year's list, however, focuses on websites and online resources that have either launched, released new products, or provided a novel contribution to the conversation about built and natural environments in 2014. In short, these sites haven't only presented the news; they have, in some sense, made the news.

With this year's list, we call attention to the continuing need to innovate the presentation of stories and information regarding the subjects of cities, design, and planning. Although the ideas, concepts, and events of these subjects are critical to every single human on the planet, media professionals and urban design professionals have a long way to go toward bridging gaps of understanding, finding language that empowers positive decision-making processes, and welcoming larger and more diverse populations to the conversation.

Therefore, consider this list both a celebration of excellence and a call to action. 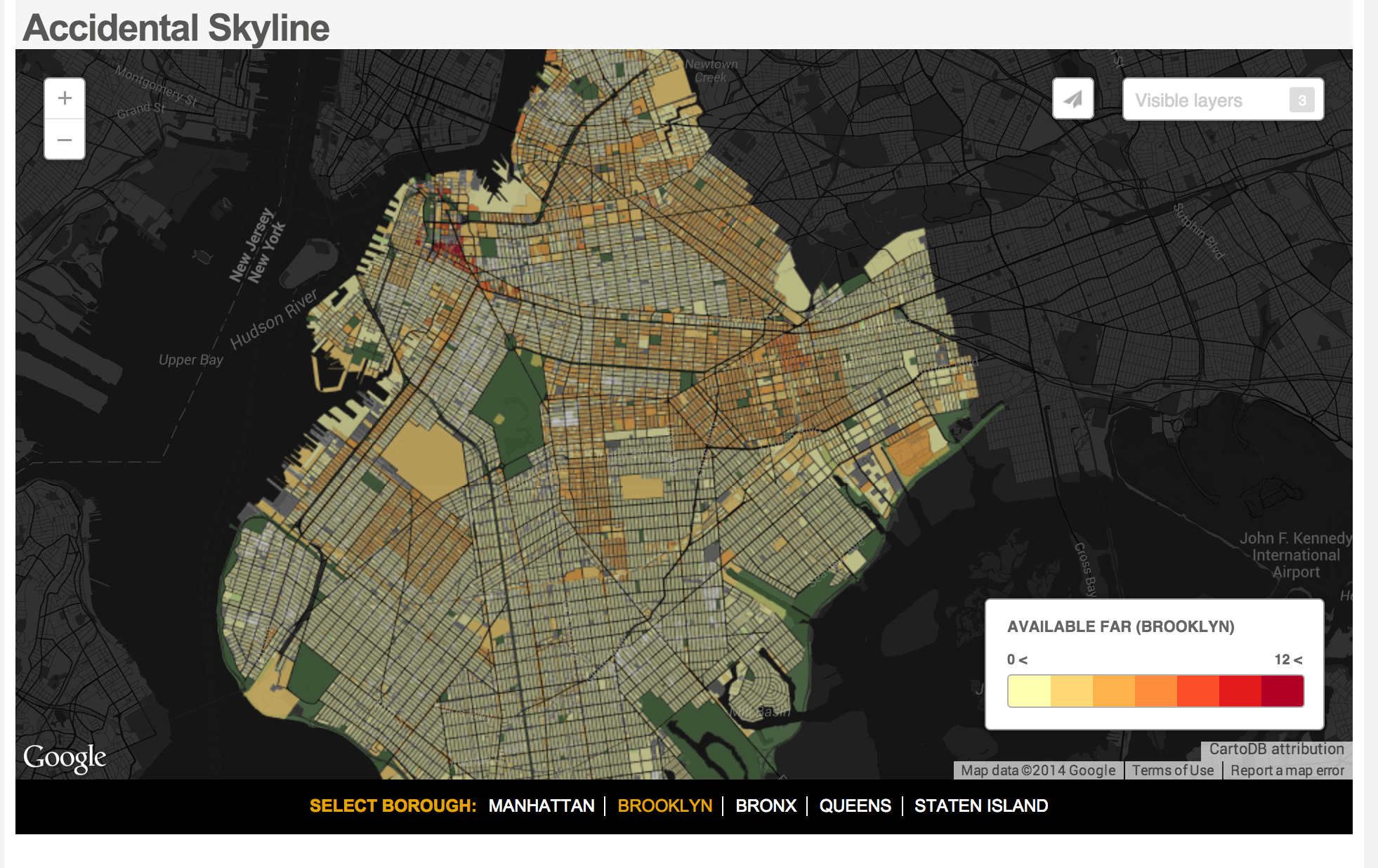 Accidental Skyline
A project of the Municipal Art Society of New York, the Accidental Skyline is a mapping tool that shows where by-right development is allowed by the zoning code of New York City. The obvious political motivation of the database aside (the website admits its concerns about "super-tall" buildings that would "cast new shadows on [Central Park] and change views of the city"), the website's simple, visual presentation of floor area ratio is a positive step in the right direction of a laudable goal: "to help demystify the city planning process and bring the public into the conversation."

The Arches Project
Originally developed by the Getty Conservation Institute and the World Monuments Fund to catalogue the ancient treasures at risk during the war in Iraq, the Arches system is currently in large-scale application for the city of Los Angeles' Survey L.A. effort. Following a public launch in October 2013, however, the Arches system has become "an open source, web- and geospatially based information system designed to inventory and manage all types of immovable heritage, including archaeological sites, buildings, structures, landscapes, and heritage ensembles or districts," according to the Getty Conservation Institute. 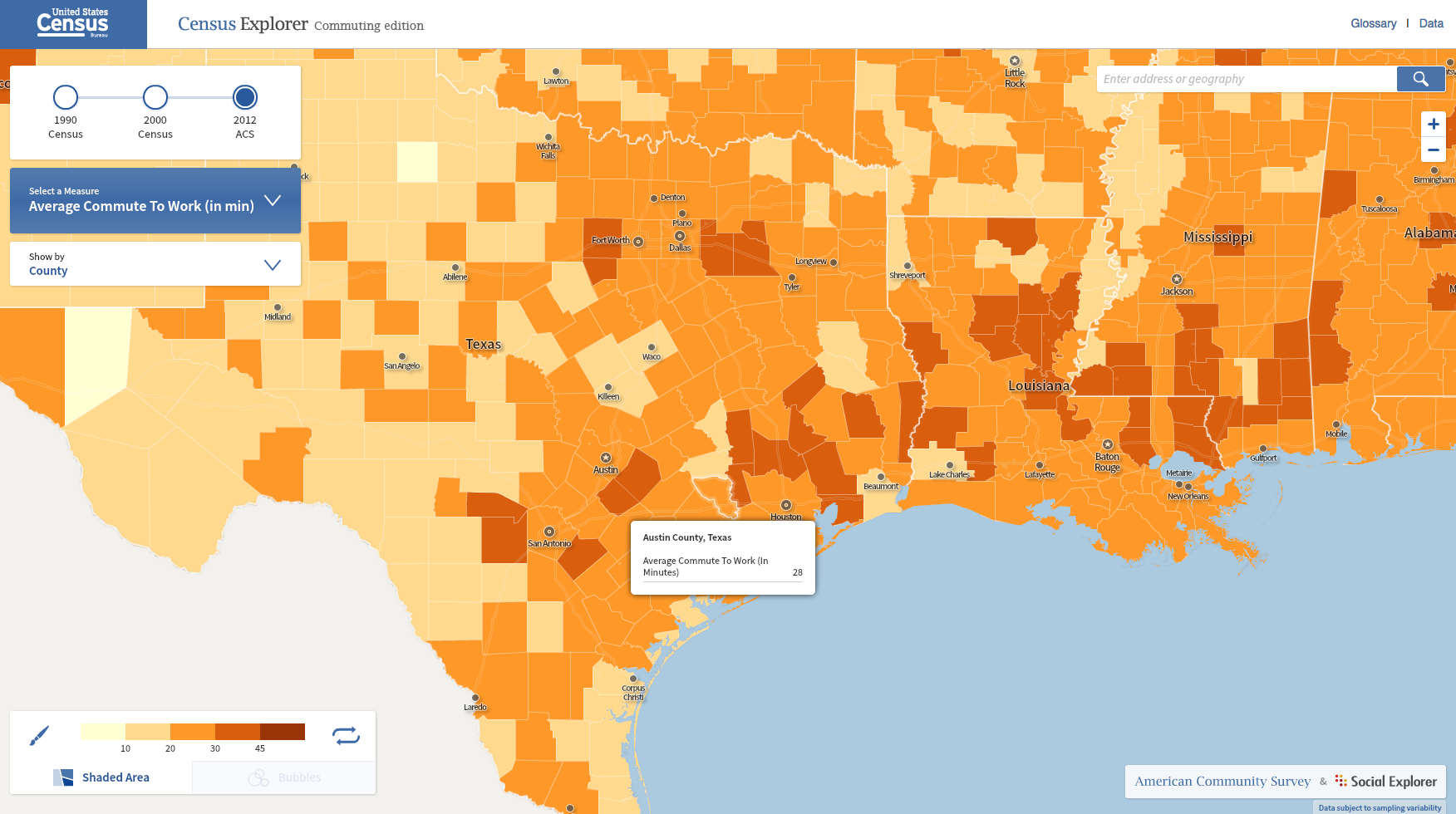 Census Explorer
In December of 2013, the U.S. Census launched the Census Explorer, a new interactive map that provided neighborhood-level demographics statistics from the 2008-2012 American Community Survey. Since the initial launch, the Census Explorer has released four editions: "Population Estimates," "Retail," "People, Education and Income," and "Commuting." That such a large, federal organization as the U.S. Census has adopted these interactive tools shows the immense potential of data visualizations to reframe the public's understanding of their communities. Here's hoping that the Commuting Edition, in particular, has an immediate, measurable influence on the public's awareness of transportation issues.

Citiscope
Launched in January 2014 under the guidance of Editor-in-Chief Neil Peirce and Managing Editor Christopher Swope, Citiscope marshals the power of independent journalism to cover urban innovations from around the world. Placing a premium on quality storytelling and reporting, Citiscope has very quickly entered the ranks of the highest quality digital news platforms writing on the subject of cities. In additional to weekly original articles, the site also includes a curated feed of news items from around the world, a special series on urban innovators, and a full and consistent social media presence. 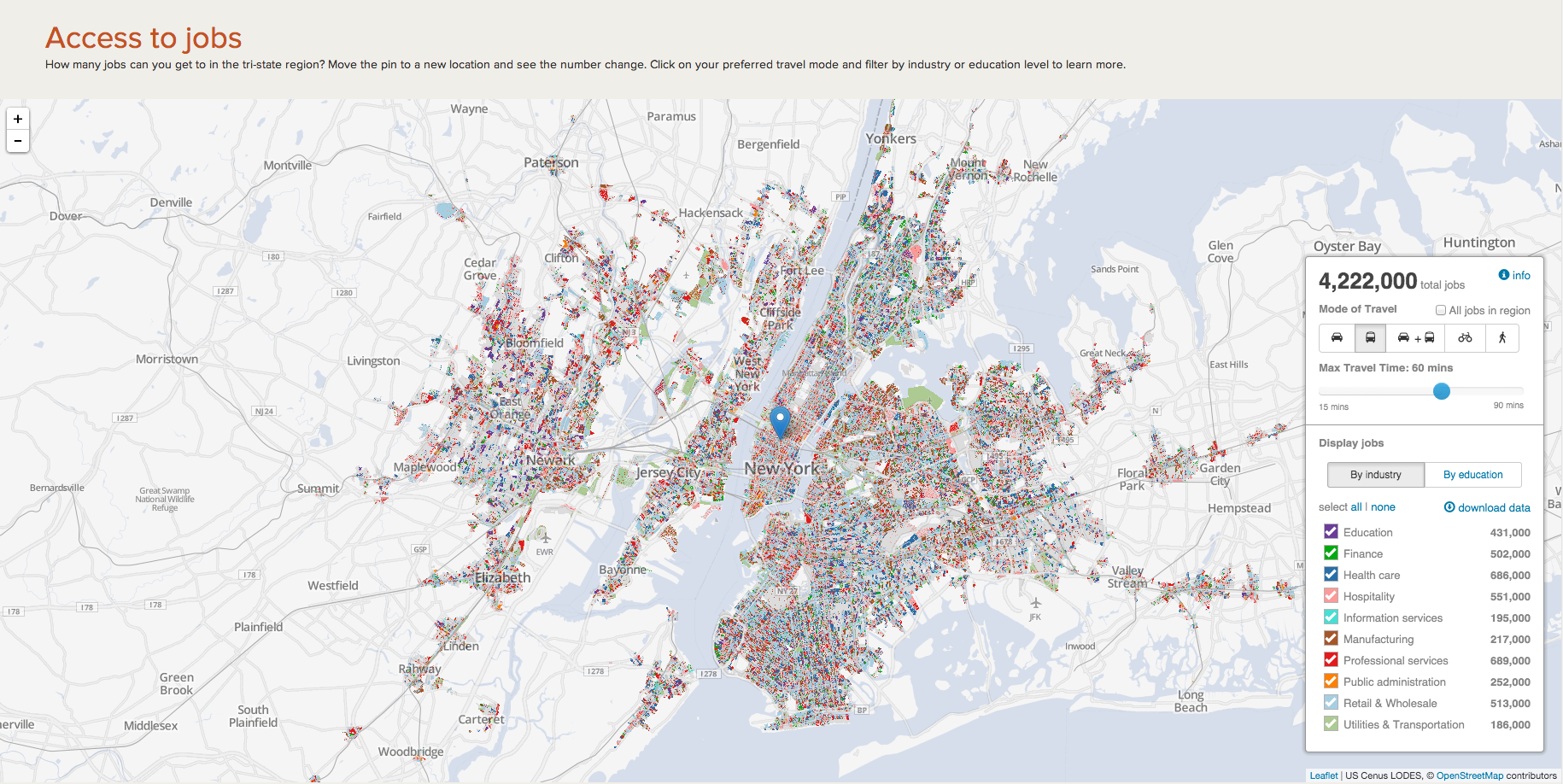 Regional Plan Association: Access to Jobs
The Regional Plan Association's interactive mapping tool is one of the year's very best examples of the utility of interactive maps. Using the Access to Jobs tool, users can explore the kinds of jobs accessible from any point in the New York metropolitan area's tri-state region. Drop a pin in Southampton, for instance (located in Suffolk County, New York), and you can see where jobs are located according to travel time, travel mode, and industry sector. In covering the interactive tool for the Washington Post, Emily Badger summed up the potential of this tool to reframe the way we think about connections: "The ultimate goal of transportation, though, isn't really to move us. It's to connect us -- to jobs, to schools, to the supermarket." 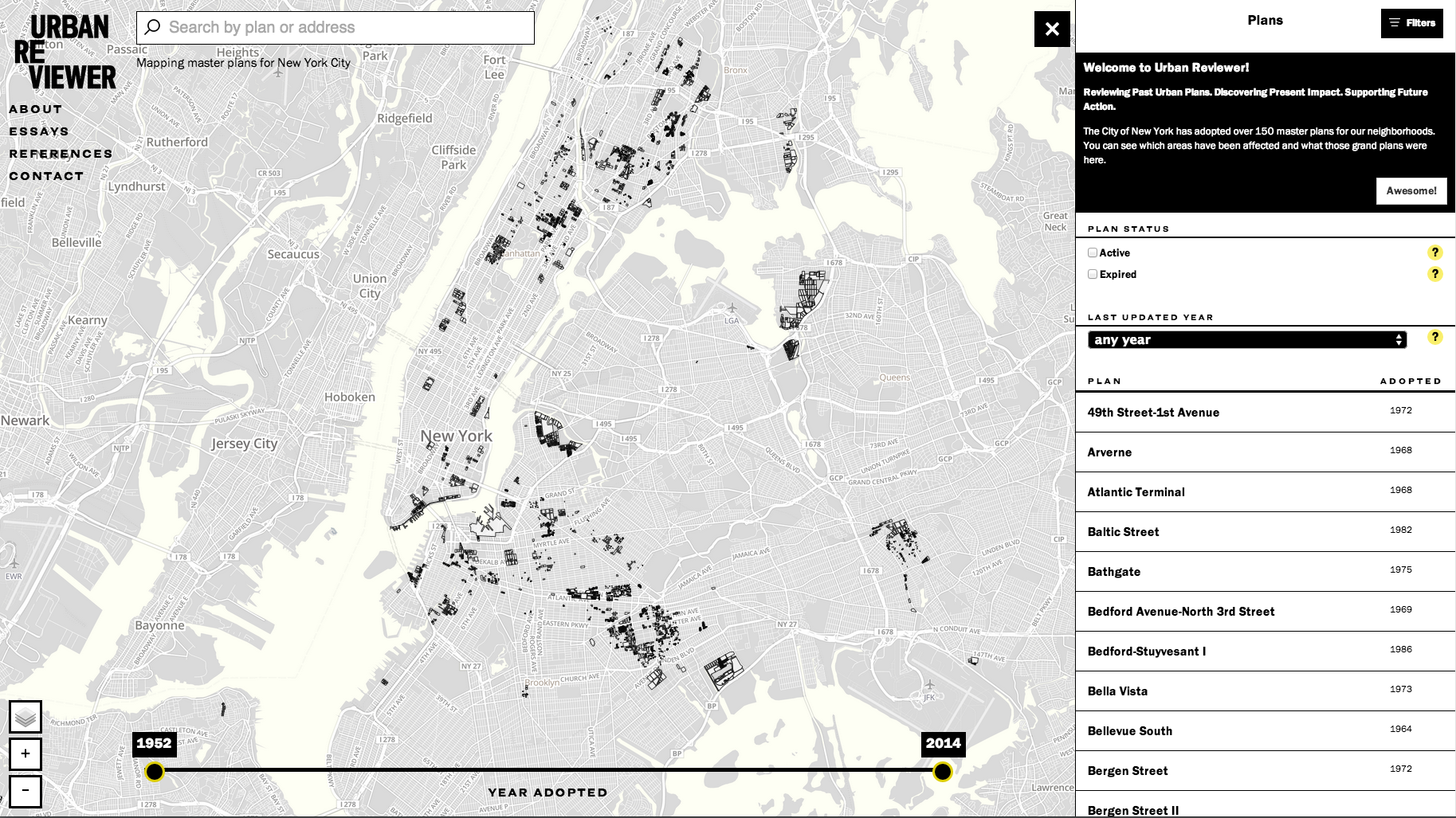 Urban Reviewer
The Urban Reviewer website, produced by 596 Acres, gathers all of New York City's adopted master plans—155 in total—into a searchable map. Urban Reviewer grew out of an earlier project by 596 Acres to document all of the publicly owned vacant land in New York City (a project 596 Acres also undertook in Philadelphia, Los Angeles, and New Orleans). Urban Reviewer's easy to use, map-based functions offer simplified public access to the sometimes-complex regulations that decide the form that neighborhoods and cities will take in the future.

USGS Historical Topographic Map Explorer
Created by a partnership between the U.S. Geological Survey and Esri, the USGS Historical Topographic Map Explorer could disappear hours, days, and weeks from the lives of armchair historians and amateur cartographers alike. According to a press release from Esri at the time of the Explorer's release, the resource is available on all digital devices and includes 178,000 maps, dating from 1884 to 2006. The website is easy to use and highly visual—thanks in part to the huge archive of maps available on the site, but also because of a helpful timeline feature that shows the chronology and scales of the available maps.

Vox
Vox began as an "experimental news site" led by Ezra Kelin, Melissa Bell, and Matt Yglesias, and it has quickly redefined expectations about the many roles an online news site can fulfill. Equally a forum for data journalism, listicles and viral maps, and, yes, experimental mediums of presentation (see the site's explainer "Card Stacks" as an example of a new content type that expands the traditional reporting capabilities of digital news sites), Vox has consistently presented news and data regarding the built environment, cities, and transportation since its launch in April. The reporting of Joseph Stromberg, for instance, has provided in-depth coverage of multi-modalism.

You Are Here
The Social Computing Group and the MIT Media Lab launched the You Are Here mapping project on March 31. Subsequently, maps like "Best Modes of Transportation" have found their way into articles on Planetizen, the Washington Post, and Vox. According to the Your Are Here site, "Each of these maps will be an aggregation of thousands of microstories, tracing the narratives of our collective experience. We will make maps of the little things that make up life — from the trees we hug, to the places where we crashed our bikes, to the benches where we fell in love." As of the writing of this list, the site had posted 114 maps. 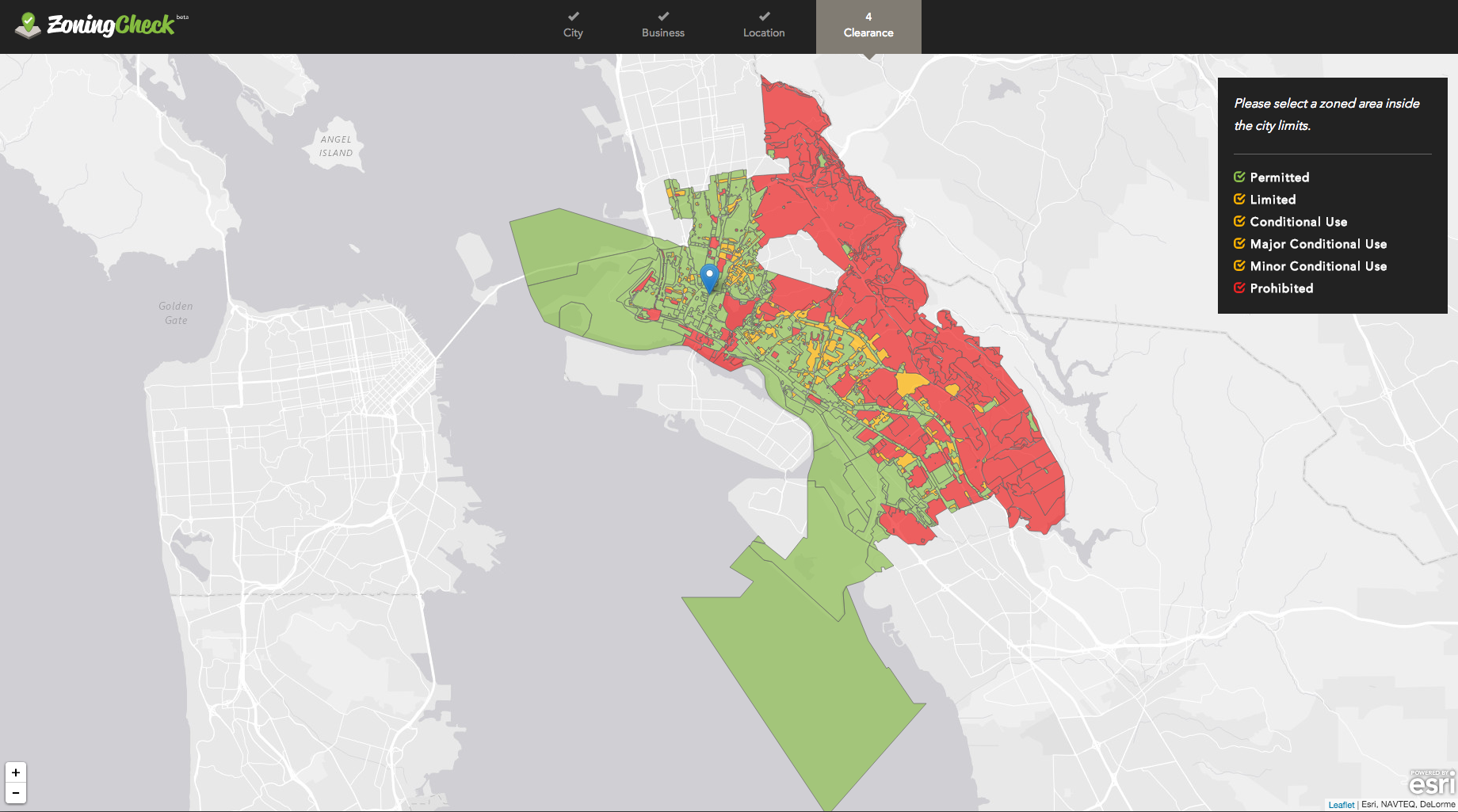 ZoningCheck
Launched on July 17, 2014 and still in beta for 30 cities in California, ZoningCheck cuts weeks from the time required to process a zoning code inquiry. Described as the first technology that can query municipal zoning codes, ZoningCheck makes it easier for businesses, entrepreneurs, and private landowners to figure out what and where they can build. The approach differs slightly from a similar app known as Zonability, in that ZoningCheck starts with the intent of the query (i.e., Where can I build a media business in Oakland, CA?) rather than the address. And, of course, ZoningCheck is a huge improvement over difficult to use municipal zoning maps or standing in line at city hall.