Hyperloop One Hails its 'Kitty Hawk' Moment in the Nevada Desert

PBS kicks off its new science and technology series with a look at just what happened in the desert with MIT's Hyperloop team. Science correspondent Miles O'Brien likens the week's events more to the "glider moment" preceding Kitty Hawk.
May 13, 2016, 10am PDT | Irvin Dawid
Share Tweet LinkedIn Email Comments

"A bare-metal sled rocketed down a track, with the sled elevated slightly by magnetic levitation technology," writes technology reporter, Marco della Cava, for USA TODAY. "It accelerated at 2 g-force before hitting a patch of sand 100 yards down the line."

The total test was just two seconds. But it was enough, Hyperloop One's founders said, to show that technology similar to that used in high-speed maglev trains could be deployed more cheaply, without the steep cost of high-tech trains and rails.

On Tuesday night, Hyperloop One had changed its name from Hyperloop Technologies to distinguish itself from rival Hyperloop Transportation Technologies, and raised $80 million.

The event was as good as any for the PBS NewsHour to launch their new weekly science and technology series, “Leading Edge,” that airs Wednesday nights.

Rather than adding to the hype surrounding the desert demonstration, science correspondent Miles O'Brien goes to the Massachusetts Institute of Technology (MIT) to spend some time with the award-winning MIT Hyperloop Team to get an academic understanding of the technology, which he describes at the end of segment as essentially putting a maglev train in a tube.

[An earlier post is about the University of California Irvine Hyperloop team.]

Regardless of what one may think of the feasibility of people and freight speeding 750 mph from Los Angeles to San Francisco in half an hour, in an enclosed tube, as opposed to the California High-Speed Rail Authority's 220 mph train making the trip in 2 hours, 40 minutes, one has to admire the dedication of the college teams engaged in competition.

The tube is critical "because you have less aerodynamic drag, so you can go faster with less resistance," explains John Mayo, project manager of the MIT Hyperloop Team, the winner of the design phase at Texas A&M in January.

They are building this scale model [as shown in video] to compete with about 30 other college teams in a totally tubular challenge this summer to demonstrate the best prototype.

The basic concept is not new. A short pneumatic train line was built beneath Manhattan in 1870 [Alfred E. Beach pneumatic subway] but the idea was just a novelty then, and has remained in the realm of George Jetson’s Dream-O-Vision ever since.

The pneumatic concept was conceived, or fantasized by Elon Musk (of Tesla fame) in 2013 as an alternative to the California's high-speed-rail project, although Musk told the college teams at the awards ceremony in College Station, Texas that the actual inspiration came while he was sitting in traffic in his car and was late for a talk. Had Musk been in a rail car that didn't get stuck in traffic as opposed to his personal car, perhaps there would not have been no Hyperloop—who knows?

Pods are integral to the Hyperloop, but are not described in the tape, so an image and explanation is helpful. 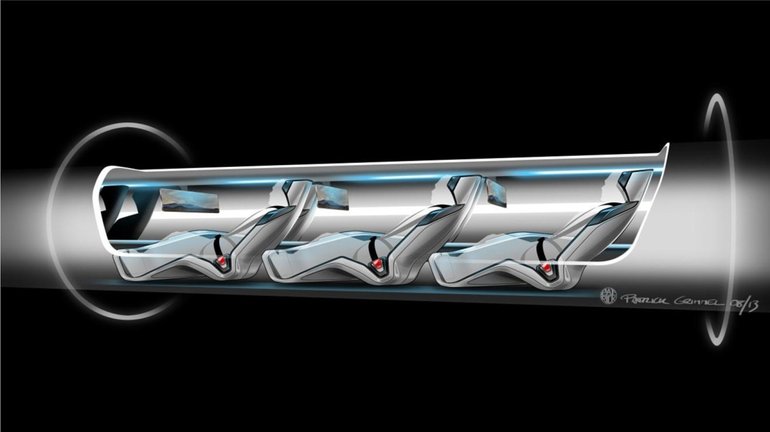 Pods may be derived from "podcars," another way of describing personal rapid transit, a 1970s technology known for having fervent advocates, but not many operating systems. Pods are the passenger of the system, unlike the comical podless system used by George Jetson depicted in the NewsHour broadcast.

An ULTra PRT vehicle on a test track at Heathrow Airport, London 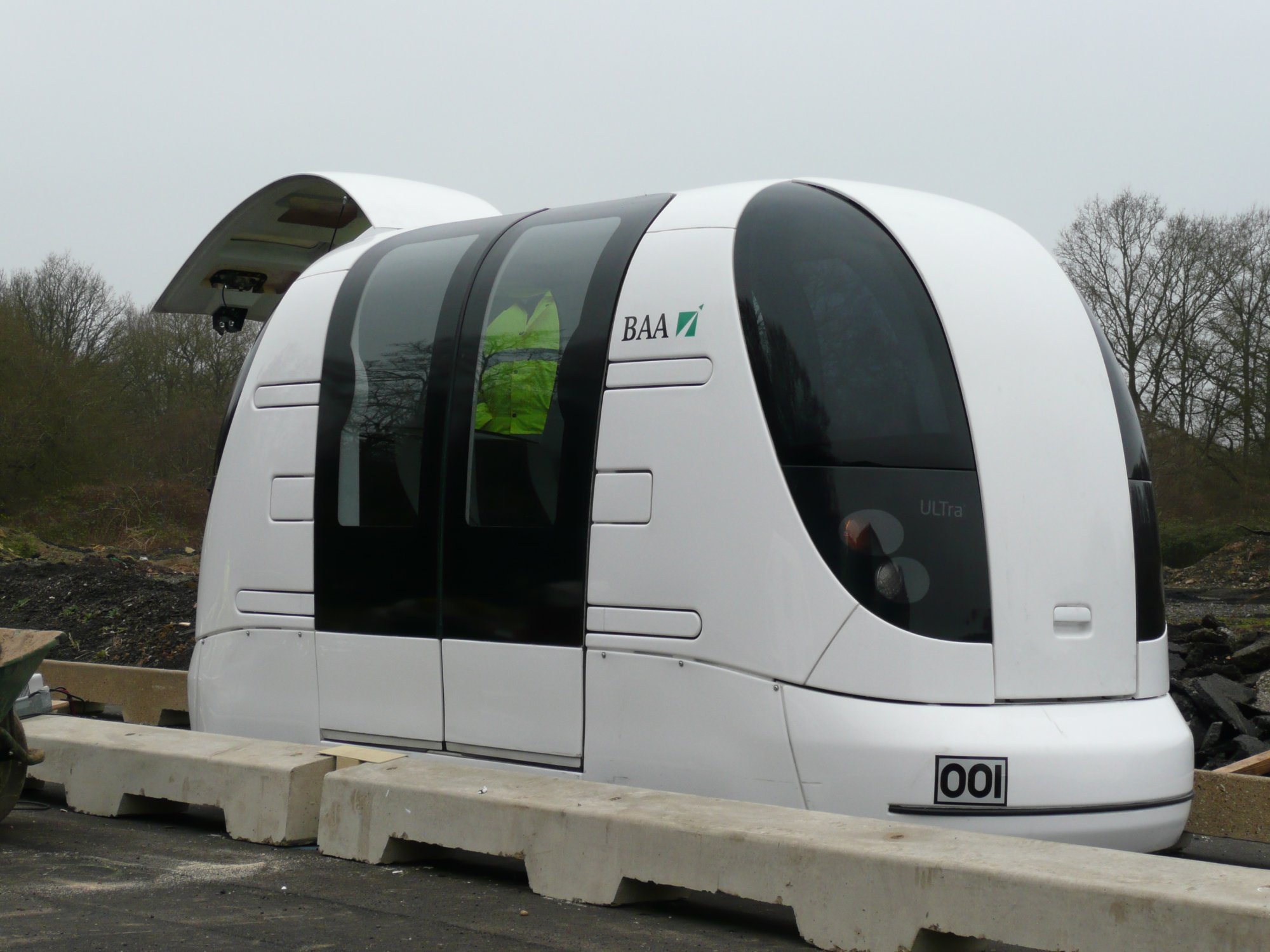 Back to Musk's fantasy, now becoming reality, thanks in no small part to inspired college engineering students.

With no friction or wind resistance, there would be nothing to stop the pod from going extremely fast. But sealing a 350-mile-long tube tight enough to hold a vacuum is also a nonstarter.

The MIT team believes magnetic levitation is the answer, but with no vacuum required, just very low air pressure inside the tube. They are testing arrays of common magnets that would levitate the pod over an aluminum track. The engineering challenge? The magnets provide lift, but also drag.

Back to Los Angeles-based Hyperloop One. Co-founder Brogan BamBrogan assures us that a Hyperloop trip will be as smooth as an elevator ride.

NewsHour host Judy Woodruff asks O'Brien about the demonstration test held Wednesday and about the viability of the new technology.

It was an opportunity for them to test out their linear electric motor, which will help drive this capsule eventually... It was a success, but in the grand scheme of things, an incremental success with many more steps to go.

There’s a lot of enthusiasm over this idea, and, thus far, what the engineers tell me is, there’s no technological stumbling blocks that they foresee. Where it comes down to are the meddlesome issues of right of way and finding a way to make the tubes as straight as possible, because the straighter it is, the faster you go.

Getting the rights of way, building the tubes, making sure there aren’t too many sharp turns, so it slows down so much that it ruins its allure, is really something that remains to be seen. But given the enthusiasm, you know, we have to say this is something to watch for now.

Woodruff comments that "she rode on the maglev train in Shanghai between downtown and its airport. It’s only a matter of a few miles, but it went almost 300 miles an hour," and asks O'Brien to explain the difference between the two technologies.

It’s basically taking the train you were on in Shanghai, which is one of the fastest, most sophisticated maglevs in the world, and putting it inside a tube.

You’re essentially taking away the resistance of the air, for all intents and purposes. And that allows you to pretty much double the speed.

Full Story:
L.A. to San Francisco by train in 30 minutes? A pipe dream indeed
Published on Wednesday, May 11, 2016 in PBS NewsHour