The Era of “When, Not If,” Compels a New Approach to Waterfront Development 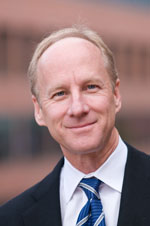 With the one-year anniversary of Hurricane Sandy upon us, the storm’s impact is still evident in many of the Northeast’s coastal communities, and there are plenty of unanswered questions and unresolved issues about where and what to rebuild. One thing is certain: Sandy was not a freak occurrence. While stunning in the scope of its destruction, it was but one of an increasing number of severe weather-related events that are affecting urban areas around the globe.

We’ve entered the era of when, not if, in terms of future storms; that is the reality of climate change. Going forward, the impact of climate change, particularly rising sea levels, will factor into virtually every aspect of redevelopment and development, with as much emphasis being placed on strengthening community resilience as on boosting economic prosperity and fostering a high quality of life. For many areas, this will mean adopting a new approach to waterfront development.

This past July, the Urban Land Institute convened an interdisciplinary panel of 23 land use and urban planning experts to explore adaptation of the built environment to climate change; the areas hit hardest by Sandy served as the backdrop for their work. The panelists spent a week touring affected neighborhoods in New York and New Jersey, interviewing public officials and other community stakeholders, and reviewing local and federal plans for rebuilding. Their conclusions formed the basis for a new report, After Sandy [PDF], which offers guidance on how to protect coastal properties and natural resources, and provide increased value to individual property owners and communities at large.

One of the main takeaways: bringing back a storm-ravaged community does not necessarily mean re-creating the past. Rather than a redo, rebuilding should be viewed as an opportunity to do better. This is based on the panelists’ consensus that, given the impacts of climate change, it would be irresponsible,   dangerous, and possibly deadly to rebuild in vulnerable areas.

The rebuilding recommendations included specifics on land use, insurance, infrastructure and targeting investments, all aimed at encouraging businesses and residents to locate and rebuild in less risky areas, helping to ensure the safety and sustainability of the entire community.  As one panelist said, “Let’s build it (the region hit by Sandy) back not the way it was, but the way it will survive.”

Among the key recommendations:

Jurisdictions should identify local land use typologies to realistically and accurately assess a region’s capacity for resiliency. This would include a thorough evaluation of environmental conditions, considered along with political, cultural, economic and demographic factors, as well as population density and access to transit. Each typology would be analyzed on a rebuilding cost/benefit basis, with top priority for development given to the least risky areas.

Accurately price climate risk into property value and flood insurance. Climate risk is a relatively new challenge for the insurance industry, and thorough analysis is needed to make sure that pricing is commensurate with risk. Insurance pricing should be analyzed to determine whether market distortions are occurring due to misunderstandings of climatic events.

Allow partial compliance and mitigation measures to create flexibility in insurance premiums. Premiums reductions should consider all mitigation efforts taken to counter the impact of storm damage, such as elevating mechanical systems. In addition, an assessment of the value of mitigation efforts should encourage investments in protective retrofits.

Devolve funding to the lowest effective level of government. Villages, townships and cities should have the authority to manage and implement federal and state funds, provided they can prove the capacity to do so, and that decisions are coordinated regionally.

And, the recommendation perhaps most necessary to ensure progress on community resiliency: Reconstitute the Hurricane Sandy Task Force. There is a clear need for a permanent entity comprised of federal, state and local representatives to keep the rebuilding process coordinated. The task force dedicated to the areas hit by Sandy could serve as a replicable model for other areas.

Each of these observations reflects the hard lesson learned from Sandy that is applicable to any vulnerable area: What used to work for waterfront development simply will not work in a world forever affected by climate change. It’s time to rethink what, where, how and why we are building, with the end game being communities that are safer, more livable, and, as a result, more vibrant and prosperous.