Advocating safety for the successful electric replacement of internal combustion engine cars solves many of the challenges of an automobile-inclusive future urbanity, and there will be no other kind.
Ian Sacs | September 1, 2013, 6pm PDT
Share Tweet LinkedIn Email Comments

What is the safest car ever tested by the United States National Highway Traffic Safety Administration?  What car currently holds 12 percent of the luxury market in California?  What car received a 99 out of 100 score from consumer reports?  What car can carry up to seven passengers and also drift?  Why do you care? 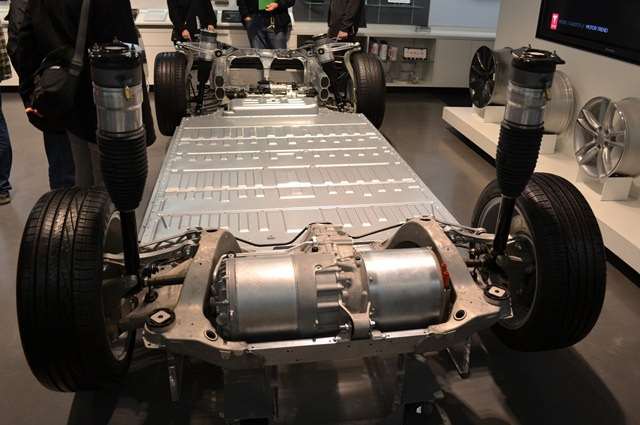 Batteries and electric motor in the bottom of the Model S frame make the car extremely difficult to flip over.

The answer to all the former questions is the same: Tesla Motors' new Model S all-electric sedan.  The answer to the latter is because advocating safety for the successful electric replacement of internal combustion engine cars solves many of the challenges of an automobile-inclusive future urbanity, and there will be no other kind.

There is a lot of hand-wringing in the planning community about where cars should fit into the picture for our increasingly urban futures.  The much-maligned SUV and its slightly lesser-evil incarnations have deservedly taken their licks from us, and the movement for balanced street space, pedestrian sprawl, and bicycle-friendly cities is far from mature, but I submit a pragmatic planning majority seek a future city solution that minimizes the car's detrimental aspects in urbanity while maintaining its benefits.  Only a few (albeit necessary) dreamers seriously contemplate an entirely car-free future.  Those are romantic notions - with which I openly sympathize - but in real life, cars serve an extremely important purpose for many sectors in our urban transport network; taxis, service calls, emergency response, drummers*, and other uses make it hard – and unreasonable – to push for a world 100% sans auto.  That reality would make many daily-life scenarios unnecessarily inconvenient.  Has anybody done a study measuring anti-car advocacy before and after parenthood?

The day to day reality is that cars – when viewed more rationally as a mobility tool rather than a love affair – have indisputable utility, should continue to be part of a rational urban planning profile, and planners will therefore still need to accommodate them.  Fortunately, overall car use drops as modal options increase, and car ownership becomes less important as cities facilitate ways to present automobiles as just another choice when considering the most convenient mode for each individual trip.  As for the machine itself, despite several failed previous attempts and many clandestine efforts to quash it entirely, we should take heart as there is a quiet revolution taking place, a revolution embodied in Tesla's Model S electric car.

The revolution reduces hundreds of intricate, moving, breakable parts of an internal combustion engine to just the two of an electric motor, dramatically cutting manufacturing and maintenance costs, and making traffic-inducing breakdowns increasingly unlikely.  The revolution removes cold engine starts and idling emissions (the cause of most tailpipe pollution in cities nowadays), and virtually eliminates the low speed noise pollution equation, leaving only wind and tire resistance at higher, predominantly highway speeds.  The revolution has already secured appreciable market share in the most progressive (albeit wealthy) sectors, which is a good place for such technology to find its footing.  For planners, the revolution offers a kinder, gentler kind of car to our active streets, softening the often-demonized bane of cars in the urban streetscape and simultaneously easing the inclusion of cars in future mobility solutions.  May we proudly and confidently support this revolution!

But, perhaps one of the most subtle aspects of this revolution – and arguably one whose value has not even been fully capitalized on by Tesla itself – is also the one that I argue will win the hearts and minds of the overwhelming majority of the general public and catapult electric cars into the mainstream: safety.  Because the revolution most interestingly provides an automobile that – with the internal combustion engine and fuel tanks removed and replaced with an electric motor the size of a milk crate and a battery that can be custom fit to squeeze beneath the passenger cabin – is significantly less compromised with respect to providing a frame that maximizes the protection of passengers; moreover, these characteristics have been used to further enhance the safety of the car.  In other words, the electric car is inherently safer than today's cars.

Elon Musk, Tesla's charismatic and outspoken spiritual leader, recently lauded the Model S's safety test results, explaining that the machine used to crush the roofs of cars in these tests actually broke after exerting a force four times the car's weight, beyond that of any other car previously tested.  Presumably, even Tesla was taken by surprise at the meaning of those results.  "Fast" is a rebel, "EV" is a geek, "Economical" is a miser, and "Green" is a hippie; but, "Safe" is a compatriot, a universally positive stereotype, non-derogatory.  Marketing on unparalleled safety credentials effectively establishes a new tier above and beyond the rest of the near-antiquated automobile market, one which is only incidentally about an electric car.

The Model S is not cheap, and electric cars will for some time continue to cost more than their ICE "competitors", but other innovative, prestigious car brands with higher price tags have successfully managed breaking into the market waving a universal banner of safety.  The Model S has not fully detached itself from the electric car's number one criticism of limited driving distance, and it still cannot match the range of a car with a tank of gasoline, but at over 200 miles of normal driving, many owners will not have to compromise their driving plans more than a handful of times per year.  Thinking about where and when one will charge the batteries using specialized charging stations is a departure from stopping at any pump, but urban drivers will increasingly find they rarely drive so much in a day that they are out of reach of "home base", and retrofitting places where cars spend a lot of time parked is already well underway (by the way, the world leader for electric charging station networks is Estonia, of course!).  Nascent is the revolution, but many of the original challenges already have workable, if yet intermittent, solutions.

Alas, the revolution is, at the moment, buoyed by a single manufacturer.  No other company has been able to accomplish so much for the electric car industry; indeed, in recent months several possible electric car company fairy tales have sadly come undone.  One who supports the electrification of cars can get the jitters contemplating how a single corporate misstep could once again result in the recalcitrant, conventional car-maker overlords incapacitating electrification for another twenty years, but perhaps we are on the threshold of an unstoppable inertia bigger than any one company.

The accomplishments of Tesla, a tiny underdog in a battlefield of Goliaths, shatter dogmas of the automobile industry, as well as the electric car.  I submit Tesla will be remembered not as much for its excellent products, as for the irreversible leaps the company has made for an industry that, when considering the many failed attempts to get it right and the technological limitations of energy storage, is still a bit ahead of its time.  If they and other manufacturers push the unmatched safety features of electric cars to the point that consumers demand these new, higher standards, Fossil Fuel-powered cars will be supplanted that much faster.  For those of us advocating for and living in cities, it can't come soon enough.

*Have you ever tried to transport a drum kit or other band equipment to a concert on the subway?