High-density development in Australia is causing more greenhouse gases than the suburbs, argues Dr. Tony Recsei of the group Save Our Suburbs, in this rebuttal of a blog post by Michael Dudley.
February 15, 2010, 5am PST | Tony Recsei
Share Tweet LinkedIn Email Comments

There has been a tremendous response to my introduction to the Demographia Survey. Many have asked me to expand upon the arguments and provide documentation (such as Michael Dudley in this space), which was not possible in a preface. This I am pleased to do.

Advocates of high-density policies (often termed "Smart Growth" but also under other descriptions and euphemisms such as "urban consolidation", "compact development", "growth management" and "urban renewal") maintain these policies save energy and reduce greenhouse gas emissions.

A comprehensive study of per capita emissions in Australia based on household consumption of all products and services appears in the Australian Conservation Foundation's Consumption Atlas. Unexpectedly, this analysis shows that greenhouse gas emissions of those living in high-density areas are greater than for those living in low-density areas. An analysis of the data (1) shows that the average carbon dioxide equivalent emission of the high-density core areas of Australian cities is 27.9 tonnes per person whereas that for the low-density outer areas is 17.5 tonnes per person. As mentioned in the Demographia Survey introduction, food and goods purchased account for most of the emissions and this amounts to more for wealthier inner-city dwellers.

Surprisingly, transport emissions amount to very little (only 10.5%), household electricity and heating fuel being about twice as much at 20.0%. (2) It should also be noted that the emissions from household dwelling construction and renovations at 11.8% are greater than emissions for transport. It is clear that transport, so heavily emphasized by Smart Growth advocates, is responsible for only a small fraction of household emissions.

Interestingly, using regression analysis to attempt to isolate variables influencing household emissions, the paper on which the data is based (3) finds that density, as an isolated variable, has practically no effect on total energy requirements. The paper also finds that density has little effect on the per person energy requirement for mobility and automotive fuel consumption.

Another study which solely measures direct household energy consumption (4) (thus excluding the effect of purchases) found that annual greenhouse emissions from this source in high-rise equated to 5.4 tonnes CO2 per person per year whereas that for detached housing was only 2.9 tonnes. So even when excluding purchases associated with wealth, high-rise still comes out worst.

Yet another study, also not incorporating factors directly associated with wealth (5) finds that the total of transport, building operational and building embodied annual greenhouse gas emissions per person for city apartments is 10 tonnes whereas that for outer suburban dwellers is 7.3 tonnes – once again more for apartments.

The explanation for these findings probably partly arises from lower occupancy rates in high-rise compared to single-residential (as revealed in the above-mentioned studies) and the use of elevators, clothes dryers, air-conditioners and common lighted areas such as parking garages and foyers. Most studies do not include this latter important element, simply because they are based upon consumer bills which do not include common consumption. In addition there is the greater energy per resident required to construct high-rise.

Looking towards the future, if we are to reduce our urban energy and water footprint by individually collecting localised solar energy and rainwater it appears reasonable that this will only be practical for dwellings that have a large roof area per inhabitant. That means low density.

In summary, in the Australian situation there is no environmental emission evidence that justifies forcing people to live in apartments - if anything the reverse seems to be the case.

Not only does transport comprise only a minor portion of household emissions, the energy difference between the use of public and private transport modes is surprising small. The Sydney City Rail website states "greenhouse gas emissions per passenger kilometre for rail transport is up to five times less than that of car transport" (my emphasis).

However one cannot assume optimal conditions to always prevail such as full carriages. Such theoretical figures are just that – theoretical. Theoretical figures for automobiles would also be much more favourable if one assumes for example full occupancy of seats.

In fact the actual greenhouse gas emissions per passenger kilometre for the Sydney rail network, transporting around 500,000 passengers each day, is 105 grams. (6) The figure for automobiles in Australia, assuming an average seat occupancy of 1.3, averages 155 grams and is much less for modern fuel-efficient vehicles that emit a mere 70 grams. It needs to also be considered that direct point to point travel distances by personal transport are frequently less than that for equivalent public transport journeys so further reducing the energy difference.

Our research shows that high-density developments hardly reduce per person travel intensity at all. Dudley dismisses a Melbourne study (7) I mentioned that shows that people who moved into newly converted dense areas did not use public transport to any greater extent, and there was little or no change in their percentage of car use. He claims this is due to Melbourne being "a sprawling city". However the overall density of Melbourne is not relevant here as, in addition to being well served by public transport, the converted areas are located very close to the central business district. It sometimes seems that the last refuge of Smart Growth advocates is to declare whatever they don't like as sprawl. Indeed, it could be argued that there are no cities in the developed world that do not sprawl.

Developers recognise that units without parking are not saleable. In Melbourne medium density housing projects located near commercial or transit centres invariably include one or two parking places per dwelling. (8) The initial developers of a 5.7ha site near Sydney Central Station abandoned their proposed development of the huge multi-unit project mainly because authorities insisted that a maximum limit of 60 per cent of the units could be allocated parking. (9) This abandonment was in spite of the fact that the site could not be in a better location for public transport, being adjacent to the central railway station and major bus routes that radiate out from the locality.

The reality is that, for many journeys undertaken (including travelling to locations outside the city centre, attending childrens' sport and recreational activities, transporting pets and visiting friends), public transport is unsuitable or even forbidden as with bulky goods or pets, as well as being too inconvenient and time-consuming to be of practical benefit.

A 2008 Canadian studyon the relationship between density and transit use does not alter the above assessment. It plainly shows how little density contributes to a change in automobile use. Without any evidence to the contrary, it seems reasonable to assume that the Canadian fraction of total household emissions that relate to transport is similar to that shown on the Australian Conservation Foundation's website, being 10.5%. Applying this value to the data in Chart 2 of this Canadian study one finds that for those living within 5 km of the city centre there would be a difference attributable to density of only 1% in total annual emissions per person. For people living 20 km or more from the city centre the difference would be much less at 0.2%. Yet it seems that for Smart Growth advocates this miniscule difference justifies cramming people together like sardines. These believers ignore other much more significant factors affecting emissions that completely over-ride this minute transport-related effect.

It is interesting to note that journey to work travel times do not seen to decrease as density increases. Looking at New York and some examples of large cities of different density there is no indication that these times are less in dense cities:

The increased congestion caused by high-density policies results in inefficient stop-start traffic which increases greenhouse gas emissions as a direct consequence of burning more fuel per km and increases the concentration of dangerous micro-particles from vehicle exhausts. The resulting greater traffic per area and less volume available for dispersion exacerbates this. The World Health Organization maintains that several times as many people die from these particles every year as do from traffic accidents. (10)

The evidence is that the imposition of high density policies does not lead to reduced traffic congestion, lower air pollution levels and improved travel times. The reverse appears to be the case.

The increasing concentration of dangerous micro-particles from vehicle exhausts is mentioned above.

In addition, mental health problems are of major concern. A study of over 4 million Swedes (11) has shown that the rates for psychosis were 70% greater for the denser areas. There was also a 16% greater risk of developing depression. The paper discusses various reasons for this finding but the conclusion is compelling: "A high level of urbanisation is associated with increased risk of psychosis and depression in both men and women".

Another study of a population of 350,000 people in Holland (12) also finds adverse mental (and other) health consequences. After allowing for demographic and socio-economic characteristics, for those living in areas with only 10% green space the prevalence of depression and anxiety was 32% and 26% respectively. For those with 90% green space the prevalence was respectively 24% and 18%, a significant difference for an increasingly serious problem.

Research also indicates that bringing up young children in apartments can have adverse consequences. (13) Keeping children quiet emphasizes activities that are sedentary. There is a lack of safe active play space outside the home - parks and other public open space offer poor security.

There are other indirect indicators that relate to this question: 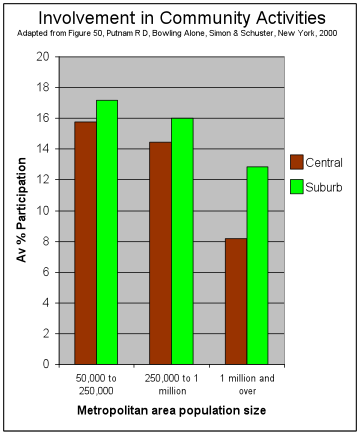 The data therefore show, contrary to what was claimed, that as density increases, people's involvement in community activity declines. Facts available indicate that adverse health and social consequences of high-density living are significant.

This aspect has been adequately covered in the Demographia Survey. It seems reasonable to conclude that the major cause of excessive housing costs in Australia lies in over-prescriptive land use regulation. In Sydney, where housing costs are the second highest in the 272 markets surveyed, the New South Wales government has restricted the release of greenfield housing sites (19 while at the same time demanding municipalities increase densities under threat of removing the councils' planning powers. Since 1977 the New South Wales population increased by 38% while the proportion of greenfields land release sites decreased from an annual average of 20% of dwelling production to 5%. (20)

High-density policies increase the cost of housing, with special disadvantage to the younger generation by locking them out of the housing market. In addition, they disadvantage the economy by throttling the competitiveness of new business trying to set up in the region.

The evidence available so far indicates that Smart Growth policies forced into unwilling communities do not reduce greenhouse gas emissions, do not facilitate travel, do not improve health, do not increase housing choice and do not reduce overall costs. It seems that planners are intent on sweeping us backwards into despotic, overcrowded Dickensian gloom.

Dr. Tony Recsei has a background in chemistry and is an environmental consultant. Since retiring he has taken an interest in community affairs and is president of the Save Our Suburbs community group which opposes over-development forced onto communities by the New South Wales State Government.

EDITOR'S NOTE: Please see my own blog post on this editorial here.