Reducing greenhouse gas emissions is both a local challenge and a global imperative, says Rohit Aggarwala, the director of Long-Term Planning and Sustainability for New York City. Nate Berg caught up with Aggarwala to talk about his office's sustainability plans and the possible dangers posed by federal intervention.

New York City is America's most iconic metropolis. It's the biggest, the most famous and in many ways the most exciting. Beyond the glitz, New York is also exciting because it is instituting some very forward thinking programs and policies like the city's long-term sustainability plan, PlaNYC. New York's leadership on environmental sustainability has been a model for the nation.

Rohit Aggarwala is one of the reasons why. As director of Long-Term Planning and Sustainability for the office of New York Mayor Michael Bloomberg, he was recently invited to speak on a panel at Opportunity Green, a green business conference held at UCLA November 7-8. He offered an update on the two-year-old PlaNYC, a 127-initiative plan to green the city. Two-thirds of those initiatives are either on-time or ahead of schedule, and the city hopes to reduce its greenhouse gas emissions 30% by 2030. 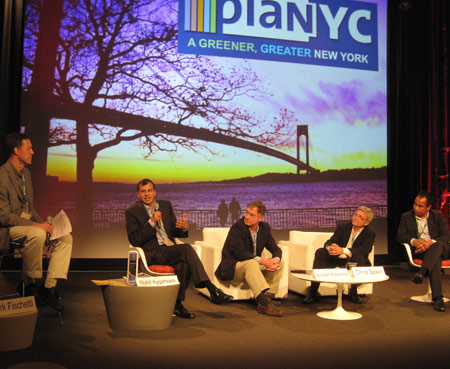 Rohit Aggarwala speaks on a panel at the Opportunity Green conference in Los Angeles November 7.

New York City already has one of the lowest per capita rates of greenhouse gas emissions among major global cities, and as it continues to chip away at its levels, other cities are looking to replicate its success. But what works for New York may not be the best method for other cities, Aggarwala cautions.

"A city's greening strategy has to be based on that city," Aggarwala said, responding to a local questioner wondering how L.A. could emulate New York's successes.

After the panel discussion, Aggarwala delved deeper into the inherent problems with city comparisons. He says that even with fairly straightforward issues like emissions levels, comparing some indicators between cities can lead to misconceptions.

"The data to do apples-to-apples comparisons just aren't there yet," Aggarwala said.

In fact, the ability of cities to take the lead in reducing their emissions may be in jeopardy. The American Clean Energy and Security Act (ACES), a bill aimed at creating a carbon cap-and-trade system, could limit how well cities are able to enact the policies they need to reduce carbon emissions. The bill was passed by the House of Representatives earlier this year, and prompted a series of critiques from Aggarwala's office calling for changes to the bill's language.

In a memo to Mayor Bloomberg about the bill [PDF], Aggarwala argues that cities are already leading the reduction of carbon emissions because they control many of the policies and codes that can be locally updated to achieve those reductions. By shifting money away from cities and relying on state-wide guidance over these policies, the effectiveness of these techniques will be reduced, Aggarwala says.

Even with the city-oriented mindset that has developed within the Obama Administration, Aggarwala remains skeptical that federal policies will make much of a difference in the way cities function.

"Traditionally, the federal government has had very clearly defined roles for states, but not for cities," he said. "That's a problem."

In the meantime, New York City's sustainability plan is moving forward, despite the possible hindrance of the federal government, and without its guidance.