Urban development, demolition, and redevelopment has been a century-long pattern in Salt Lake City, Utah. As the city again ventures into a massive redevelopment project, former planning director Stephen Goldsmith wants the community to take a new look at what this change means for the city. And he's created a museum to help them do it.

No city is a stagnant place. Shifting demographics, lifestyles, and economic trends all influence the evolution of cities as they try to accommodate the desires and demands of the urban culture. Increasingly, this evolution is playing out in the downtowns of cities across the nation. One American city exemplifying this common state of flux is Salt Lake City, Utah. After years of decline, the city looks to be on the rebound. With two major mixed-use developments taking shape, the expansion of the city's light rail system, and millions of square feet of retail and residential units planned, downtown Salt Lake City is on the operating table, opened up for a surgery that is as much cosmetic as it is preventive.

More than 20 acres of the city's historic downtown core are currently under construction. Entire city blocks are being razed to the ground for complete remodeling. Having so much of the city's once-thriving and now struggling downtown under construction and off-limits has the tendency to keep people away. But what if, instead of keeping people away until the work is finished, the transformation itself was as exciting and celebrated as the ribbon-cutting day?

This is the question posed by Salt Lake City's former planning director Stephen Goldsmith. And he thinks making that "what if" into reality just requires a bit of a paradigm shift. 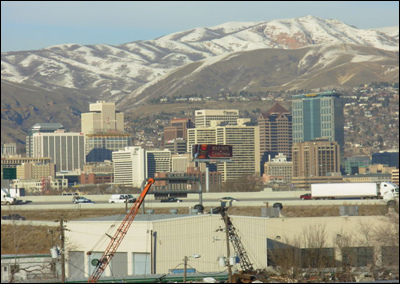 Goldsmith is the orchestrator behind the Temporary Museum of Permanent Change, a public participation project that looks to conceptualize the city and its changing character. His idea is to shift the focus away from the end-point of the physical development and towards processes of change that lead to it. He hopes to achieve this by re-casting downtown Salt Lake City's construction sites and building demolitions as museum exhibits. Drawing attention to the changing downtown, Goldsmith says, will help people understand the different ways cities change over time, and how the community's inextricable relationship with the city influences its evolution.

"The Temporary Museum of Permanent Change is an invitation to the community to come and get involved with this and enjoy these processes and, to a certain degree, help the community and the policymakers decide the choices we have as we move forward," Goldsmith said. His idea to create a "museum" was spurred by his recognition of the cyclical nature of success and failure in Salt Lake City's development. "It's always just been a downtown, of course, but by changing its label we begin to introduce new ways of thinking."

After living in the city for many years and after being appointed city planning director in 2000 and serving through the 2002 Winter Olympics, Goldsmith has seen firsthand the struggles of downtown and the attempts to revive it. Since the 1960s, the city has seen much of its population spread out into nearby suburbs, creating an economic drain on the once-bustling city. The city's TRAX light rail system and the Olympics brought some life back into the city, and over the last 15 years the city has seen the development of a new public library, children's museum, and hundreds of stores, restaurants, and housing units. But Goldsmith says that from a long-term viewpoint, the city is still very much in a state of recovery.

"A lot of the businesses have still hung in there in this downtown that has gone through a tremendous downward spiral over the last 30 or 40 years, and they're still there, still hanging on," Goldsmith says.

When an enclosed shopping mall began to struggle to stay afloat, many saw it as the final nail in the casket for the downtown economy. But Goldsmith saw the opportunity to take the mall's "grayfield" site and turn it into the kind of mixed-use walkable commercial area that has recently become so popular and successful in cities across the country. The result of this idea is a new outdoor residential and retail project called City Creek, which makes up about half of the 20 to 25 acres of land currently under construction downtown.

"We have a lot of projects going in. A lot of our downtown is evolving," said George Shaw, the city's current director of planning. "It's moving to the southwest somewhat, so we're seeing older properties -- our gateway area -- redevelop. So yes, there's a lot of new projects, new infill, old stuff coming down, new development going up."

"I guess it may be a little bit of a delayed reaction to the Olympics in some regard," said Robert Farrington, Jr., executive director of the Downtown Alliance, the group in charge of downtown Salt Lake City's business improvement district. "The good thing is that they're changing it. The bad thing is that we have to wait three years-plus until the final work is done."

Both the physical scale of the redevelopment and its lengthy construction timeline have been difficult barriers for the city's economy. But Goldsmith sees these barriers as opportunities.

"It's a teachable moment in a lot of different ways," Goldsmith says. "The scale of this city change is so enormous and our blocks are so big. We have a mile and a half of constructions walls. Since these are going to be up for such a long time, the public way needs to be animated, and the pedestrian needs to feel welcome and safe and hopefully entertained."

To achieve this, Goldsmith has partnered with Gilberto Schaefer, a graphic designer, and John Schaefer, a photographer. As a sculptor, Goldsmith recognized the importance of reconsidering the city through a creative lens. A lot of what these three artists hope to accomplish is to simply reframe the way the community looks at and thinks about the change going on around it. But they are also looking to expose the lesser-known or overlooked aspects of their city and to bring them back into the public consciousness.

Goldsmith and the Schaefers are looking to utilize the mile-and-a-half of construction walls lining the streets as a way to create connections between pedestrians and their changing city. They have been working with property owners to gain permission to build display windows along these construction walls, transforming the plain barriers into a kind of storefront façade. These display windows would be used to highlight some of the lesser-known resources that exist downtown.

This is what the Temporary Museum's proposed window displays could look like along the mile-and-a-half of construction walls in downtown Salt Lake City. (Source: Temporary Museum of Permanent Change)

Goldsmith relays the example of the Madeleine Choir School, a downtown institution where the students are all required to learn to play the violin. But, he says, many of those students might not know that just three blocks away is the Peter Paul Prier Violin Making School, one of the country's finest violin-making schools and the exact spot where each of the choir school's violins is hand-made. Educating the public about connections such as these is what Goldsmith says makes the Temporary Museum of Permanent Change unique. And by using the display windows along the construction walls to document the transformation of a piece of wood into a violin, he says the Museum can create a more familiar way for the public to understand how the process of change can be just as impressive as the finished product.

"We've heard too many people say ‘when the downtown is finished...'. There's not a downtown in the world that's finished," said Goldsmith. "Understand that the lively, vibrant, progressive, changing city is this ballet, this series of dances that go on. They happen in social terms, obviously they happen in terms of the built environment, historic preservation, all of these environmental conditions that are there, and I think as people can pay attention to these processes of change, then we will be creating cities of lasting value."

For Goldsmith, creating value in downtown Salt Lake City starts with ensuring the sustainability of local business. To make that happen, the Temporary Museum of Permanent Change has to be able to get more people downtown. But with no exhibits installed as of yet, the museum still remains at the conceptual stage.

"Cities are about change and they're always evolving and morphing into different places. And change is good," said Farrington of the Downtown Alliance, which was intrigued enough by Goldsmith's idea to donate some initial funding for its operation. "I guess we're kind of still waiting to see what, in some tangible ways, how that message gets transmitted."

"I think that's really the first challenge, is how do you take an interesting idea and put it into some kind of practical steps that engage the public."

Finishing the transition from idea to reality is the next step for Goldsmith and his co-curators. They will continue to create more partnerships with downtown businesses and the developers behind the area's growth, and they look forward to the installation of their first construction wall display windows. And as the development of downtown Salt Lake City progresses, they look forward to the ways their temporary museum will change with it.