Every year, Planetizen recognizes the excellence of the planning Internet, highlighting the websites and platforms driving the conversation surrounding issues of planning, land use, infrastructure, and the environment. Every year, the list includes a few new websites, a few websites exhibiting continued innovation in the avant garde of Internet technology, and a few blogs and news sites punching above their weight in information and influence. Taken as a whole, the list captures the varieties of potential for the Internet to empower and inform planners and the public.

The Planetizen team requested submissions for this year's list via email and monitored the planning Internet throughout the year to generate nominees before curating this list based on the same criteria as previous Top Websites posts, which date back to 2011.

The public is waking up to the scale of the tragedies of evictions in the United States, and the Anti-Eviction Mapping Project is a huge part of the effort. A self-described "data-visualization, data analysis, and storytelling collective documenting the dispossession and resistance upon gentrifying landscapes," the Anti-Eviction Mapping Project has driven a renewed and more vocal discussion about the effects of housing discrimination at various municipal levels in California, and a section for New York. A report by Tenants Together, published in May 2018 with a map by the Anti-Eviction Mapping Project, showcase the immense power of the information presented here. Content production, like a zine titled "Dislocation/Black Exodus" and a plethora of reports, rigorously documents the consequences, measured in terms of race and poverty, of housing regulation and the real estate market, making full use of the production capabilities of the Internet. 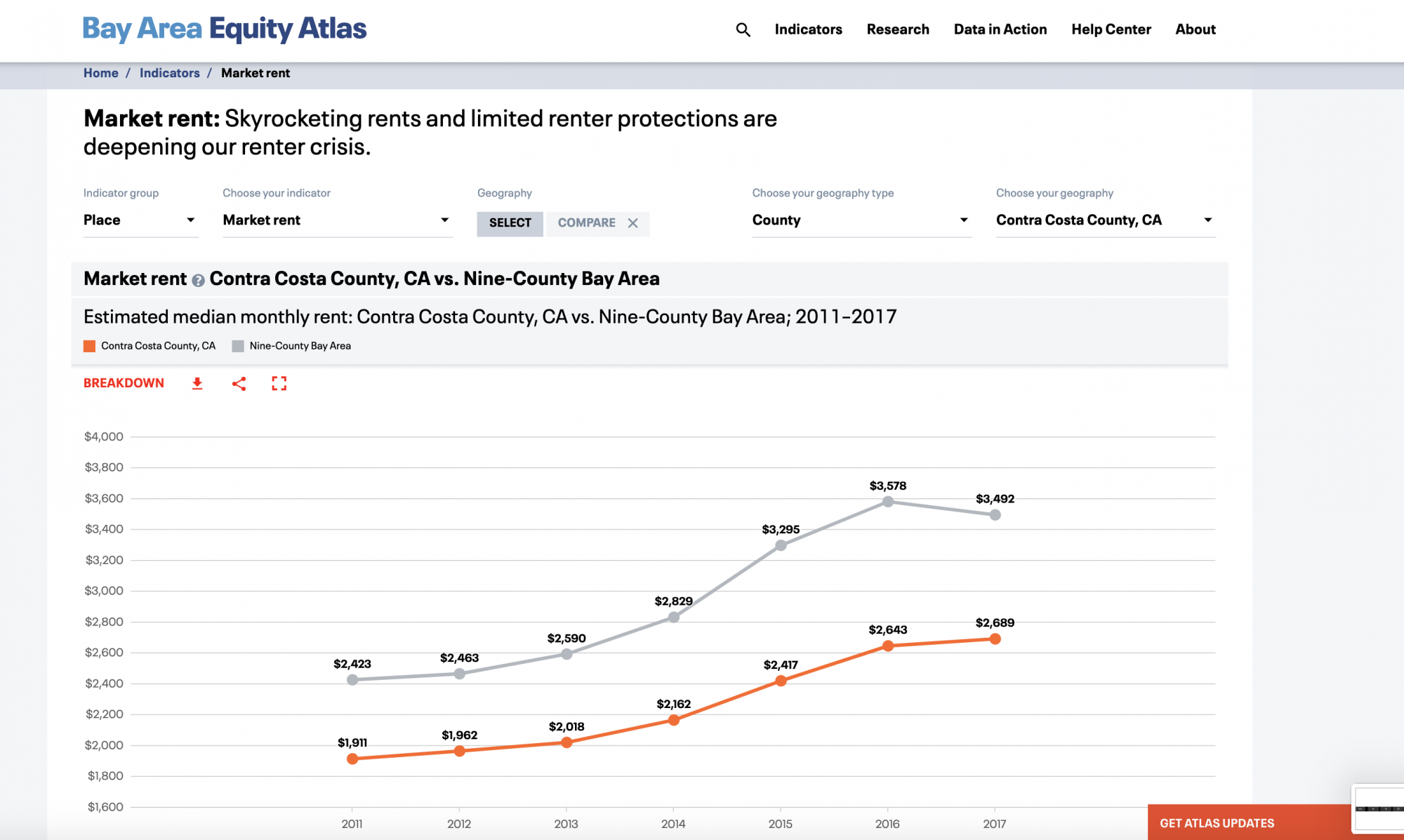 A cooperative effort between the San Francisco Foundation, PolicyLink, and the USC Program for Environmental and Regional Equity, the Bay Area Equity Atlas went online in June 2019, raising the level of Internet exposures to the dynamics of inequality, gentrification, and development at work in one of the country's most hosting impacted regions. The interactive website allows users to explore data on critical measures connected to regional equity like housing burden, market rent, and gentrification risk. There are also a few measures that might surprise users encountering some of these realities for the first time, like first-time extreme commuting, business revenue, and affordable housing production. In Contra Costa County, for instance, extreme commuting increased from 4.2 percent to 6.2 percent, according to data from the American Community Survey (ACS). Median monthly rent increased in the same County from $1,1911 in 2011 to $2,689, according to data from Zillow and the ACS. 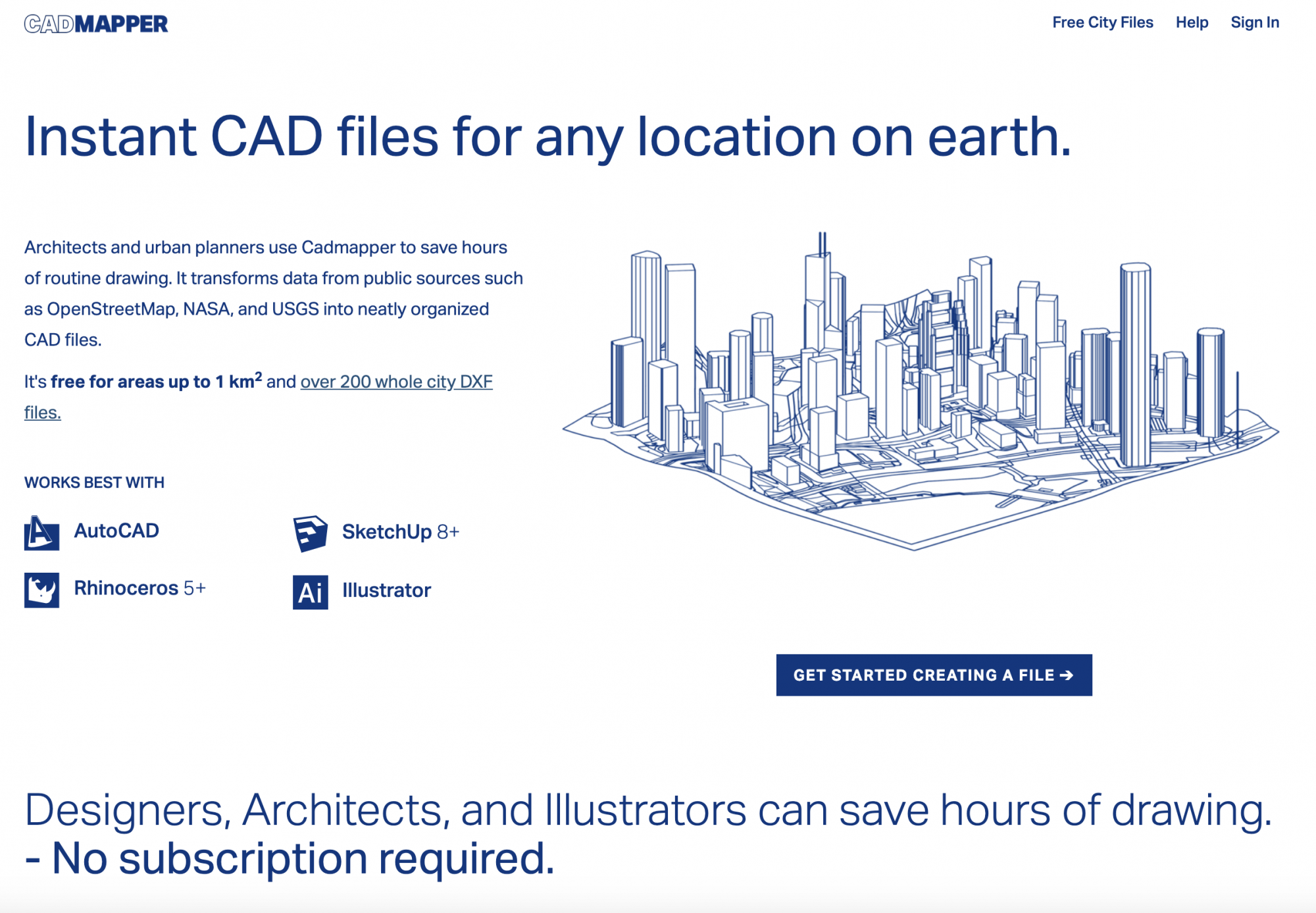 The ability of software and the Internet to drive new and improved forms of visualizations will continue to revolutionize planning and development from every angle of the process—from private developers to public engagement and public relations. Cadmapper pulls data from public sources, so the power of the service is dependent on the quality of available resources. Cadmapper is also free for areas up to a square kilometer, and Planetizen users report the usefulness of Cadmapper for creating 3D-models of project areas. A small fee can produce access to maps of areas up to 100 square kilometers, and free files for the entirety of 200 global cities are also available. 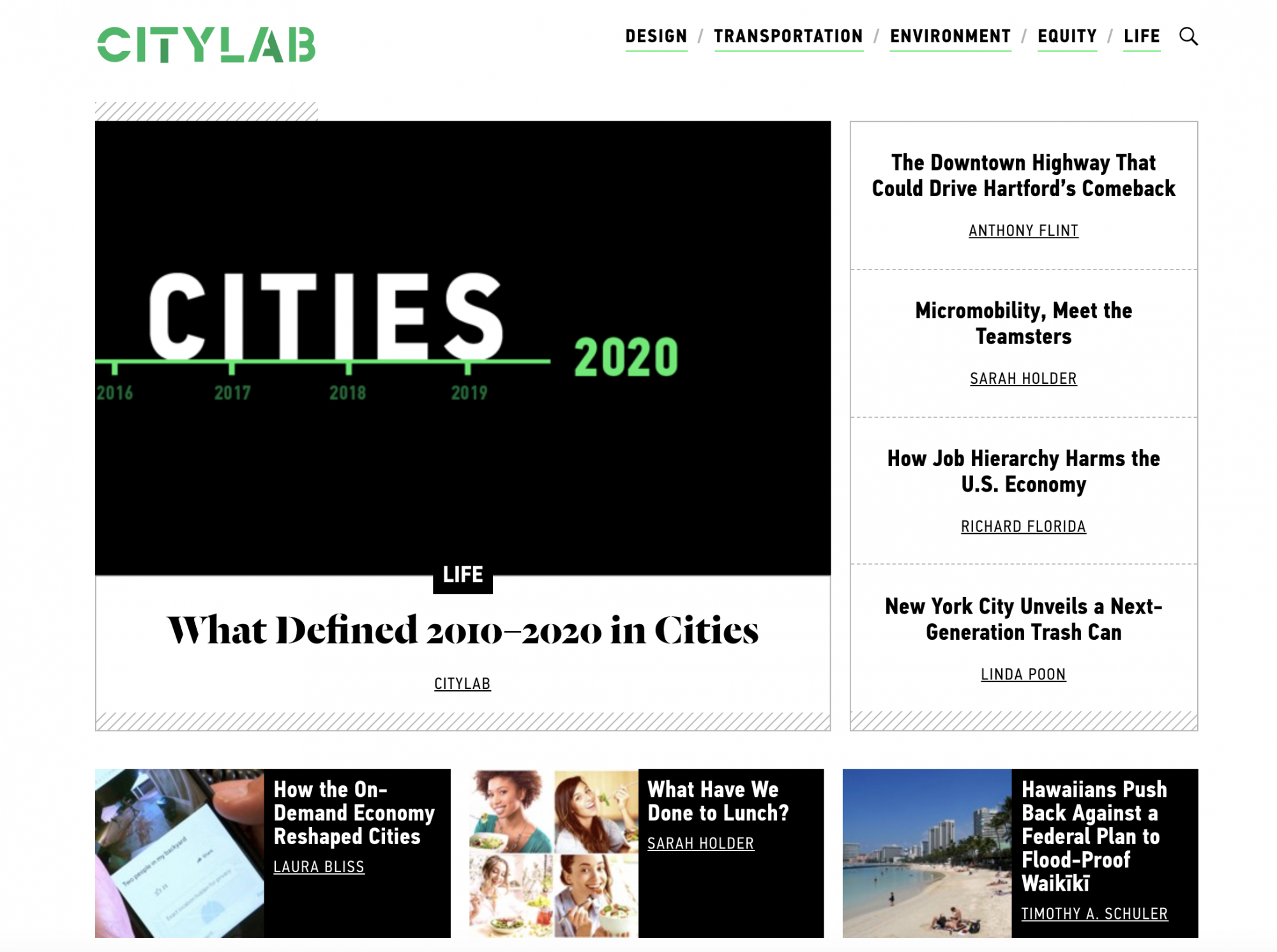 CityLab has been the go-to source for urbanism and planning news and commentary since its inception in 2011. As such, it could have appeared on the Top Websites list every year. We chose to recognize CityLab this year to recognize its ongoing excellence as well as its central role in the suddenly shifting landscape of urbanism media. Following news about the downsizing of the stalwart Curbed, news broke a few weeks later that Bloomberg had purchased CityLab and subsequently laid off staff to reorganize. The developments in this story have already been disappointing: the always-essential Amanda Kolson Hurley was among those to announce a departure from CityLab as a result of the downsizing. Planetizen includes CityLab on this list to recognize excellence in urbanism journalism, and with the sincere hope that the new CityLab will remain every bit as essential as its predecessor. 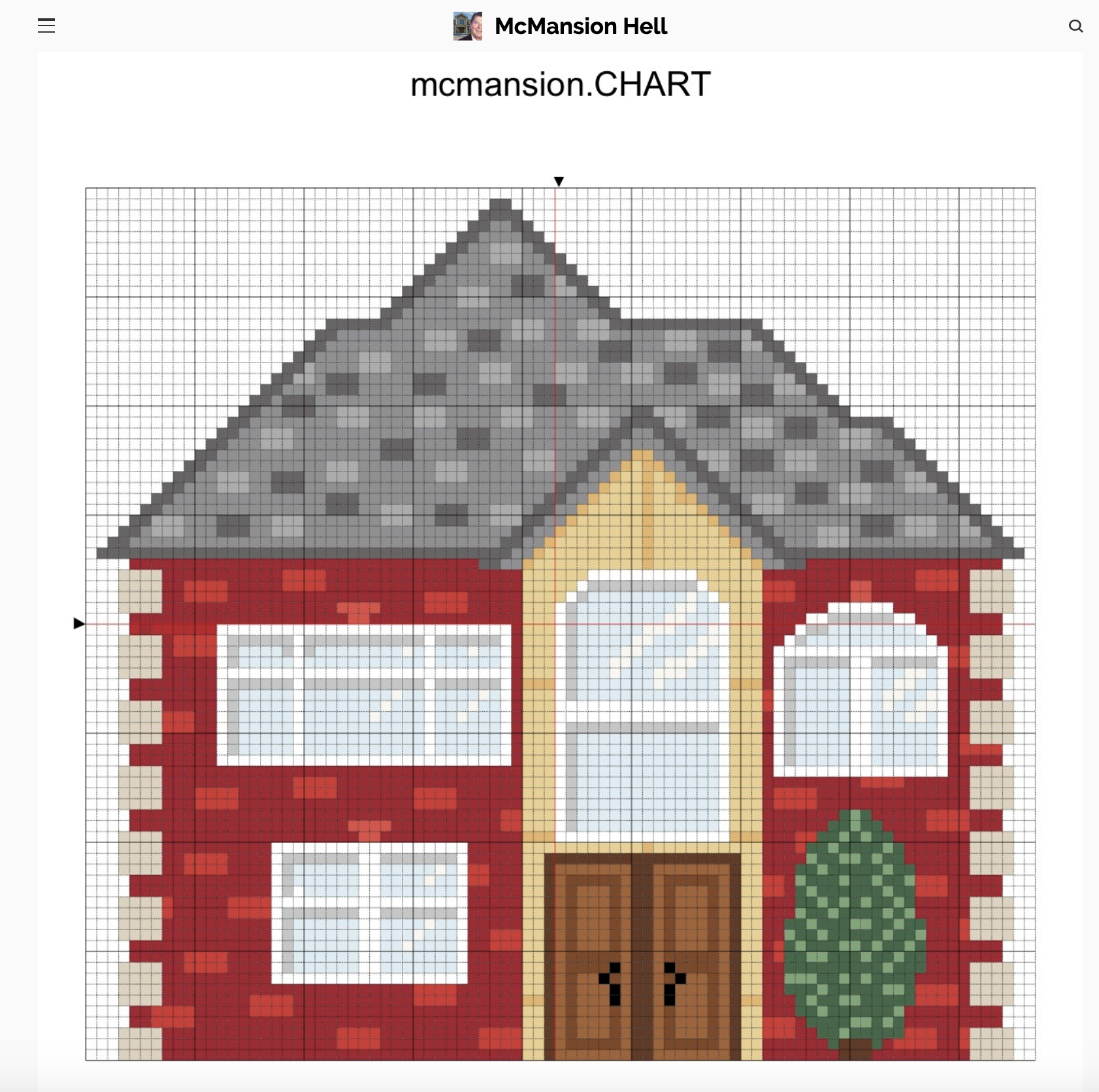 Planetizen is late in recognizing the unique and far-reaching influence of McMansion Hell—the blog brainchild of Kate Wagner that has been attracting mainstream and urbanism media attention for years. In 2017, McMansion Hell encountered a legal controversy that resulted in changes, but not deletions, for the website, and Wagner has parlayed the popularity of the blog into a contributing role at Curbed and continued prominence in the social media discussion about housing and land use policy. Meanwhile McMansion Hell continues to find new ways to engage the public with "McMansion Hell Cross Stitch Patterns" and reports on highly debatable subjects like Brutalism. 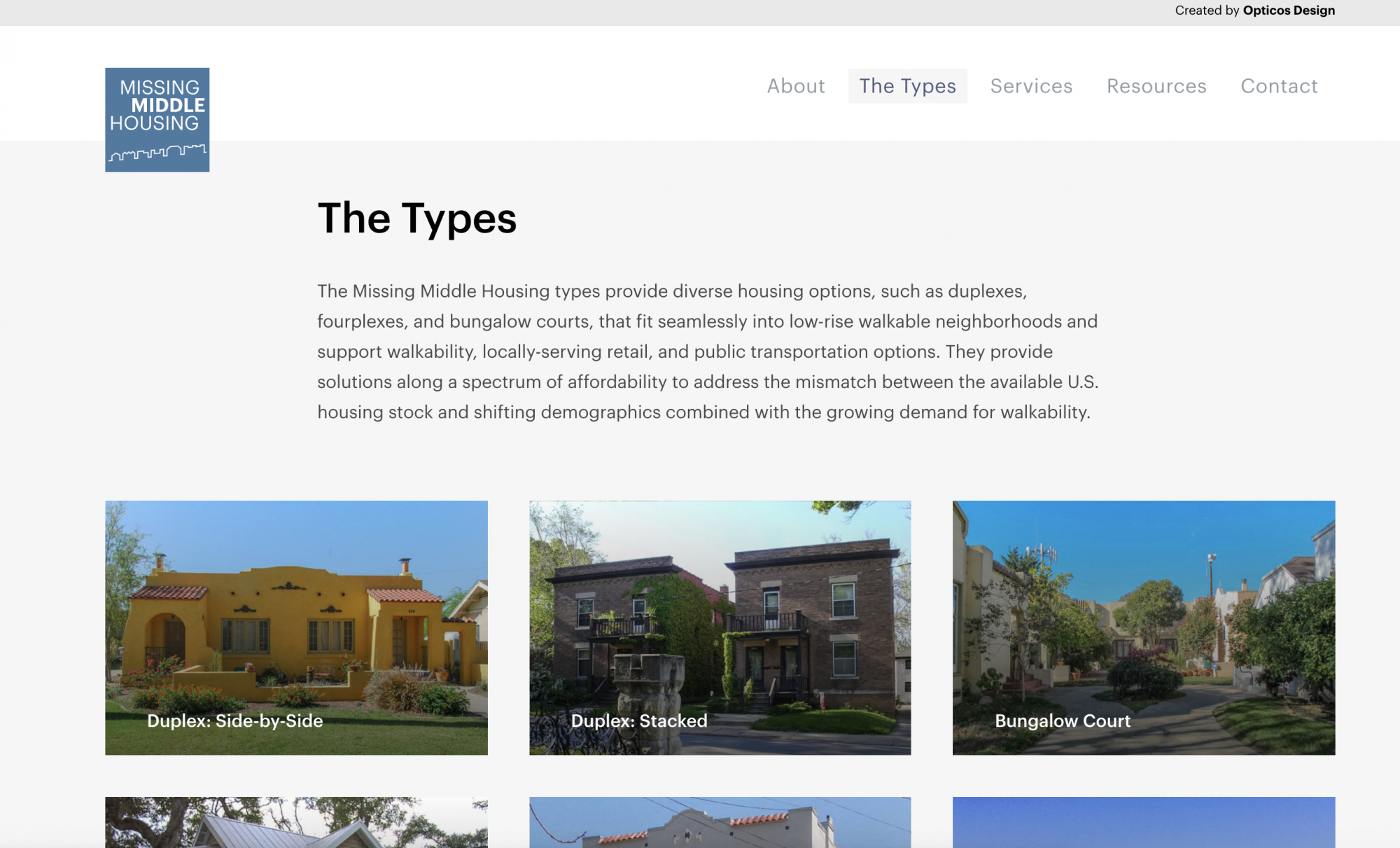 2019 was the year of missing middle housing. The cause achieved new levels of public awareness and policy success, as cities and states search for incentives to add density in response to housing affordability and congestion challenges. The Missing Middle Housing website has been around for a lot longer than this recent wave of success, offering information about the various forms missing middle housing can take as well as missing middle housing services offered through the site's owner, Opticos Design Inc. Credit for coining the term that is moving land use regulation in a new direction at the dawn of the 2020s goes to Opticos founder Daniel Parolek. The progress for missing middle housing as a policy tool and a public relations victory also represents a big win for one of the signature initiatives of the Congress for the New Urbanism. 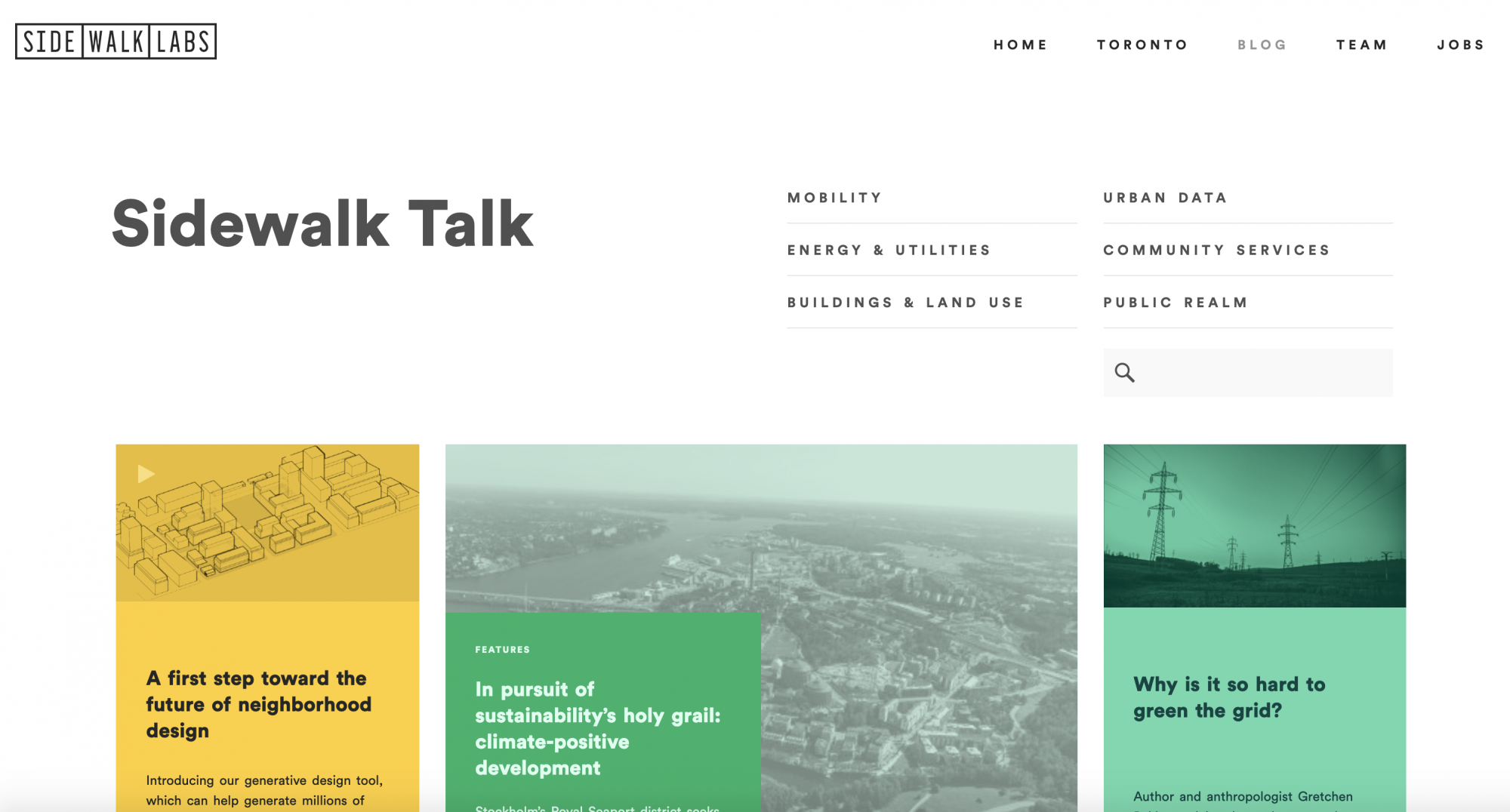 Sidewalk Labs is a subsidiary of Alphabet, the same company that owns Google, and is commonly thought of as the "smart cities" shop of Google. Sidewalk Labs is underway with one high-profile experiment at building a smart city from the ground up in the Quayside neighborhood of Toronto. While the technology and planning principles proposed in that experiment have attracted controversy and close scrutiny—from Toronto residents as well as the planning community—the ambitions of the effort are clear on a Medium website set up to share news and developments as Sidewalk Labs evolves. Most recently, Sidewalk Labs used the Medium site to share news of a new generative design tool.

As a leading advocacy organization dedicated to making cities more just and environmentally sustainable through frequent, fast, reliable public transit public transit, TransitCenter doesn't explicitly claim the mantle of  think tank but certainly lives up to the billing. Regular readers of Planetizen are familiar with the high quality research, advocacy, and services that emanate from the TransitCenter team in the form of reports and media presence in locations as far-flung from New York City to Los Angeles to Charlotte to surveys that cover the entire nation. The TransitCenter website does an expert job of presenting the numerous research reports and blog posts that drive the TransitCenter agenda. The TransitCenter team recently launched the Transit Insights infographic platform, offering a visualization of ridership data specific to six transit agencies—Houston Metro, Baltimore MTA, L.A. Metro, King County Metro (Seattle), WMATA, and DART (Dallas)—and comparisons between each. 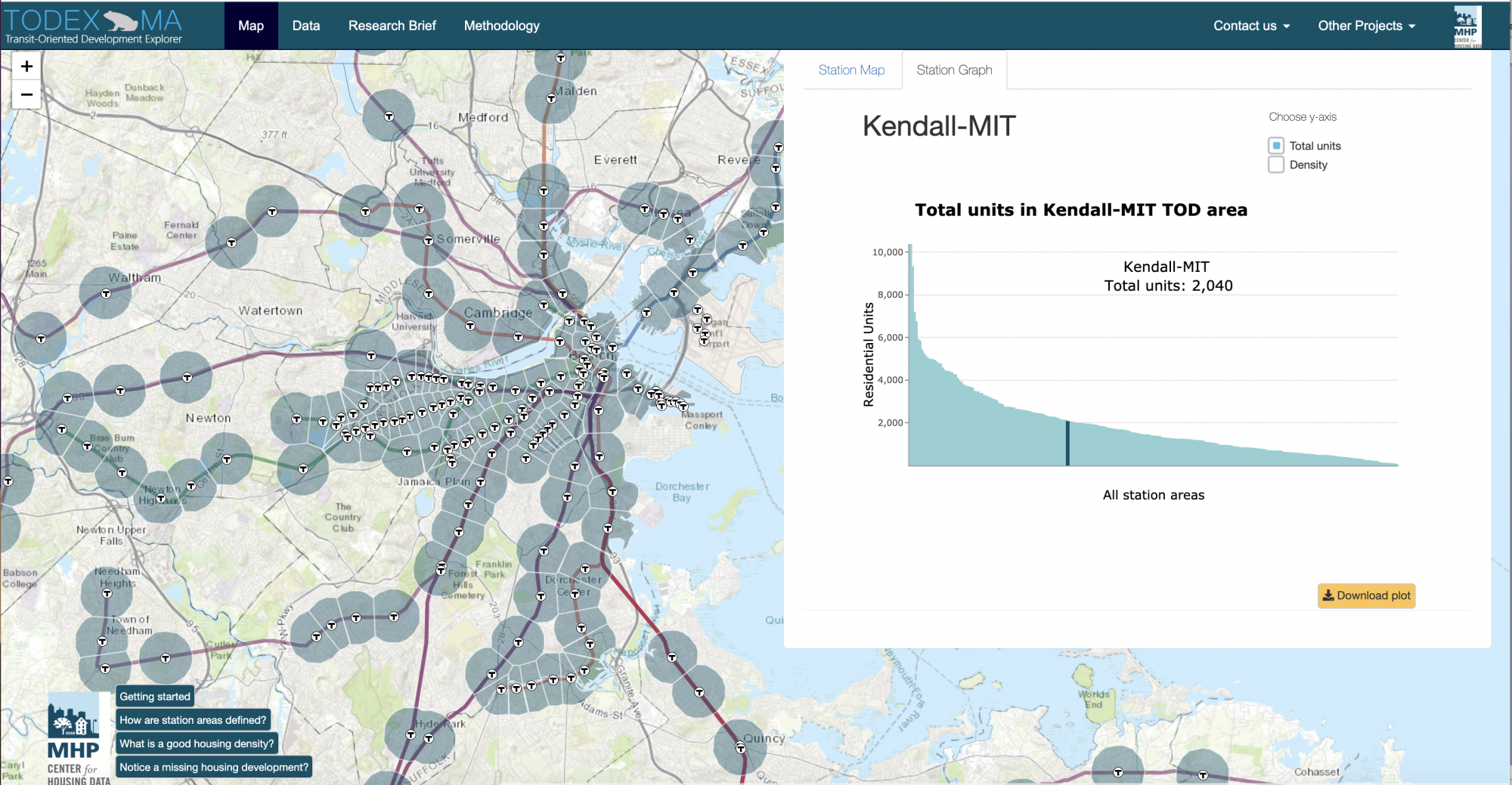 Transit oriented development is the brass ring for planners working to improve affordability and congestion in urban areas, and the "Transit-Oriented Development Explorer" (TODEX MA), published by the Massachusetts Housing Partnership (MHP), shows how much power the public sector has to leverage the data and visualization potential of Internet technology. MHP's mission is to increase housing production in the state and demonstrate effective affordable housing tools and policies. The TODEX MA is an excellent fulfillment of that purpose, mapping the opportunities to marry transit and land use planning and collecting the data into a report that describes and summarizes the benefits of transit oriented development. 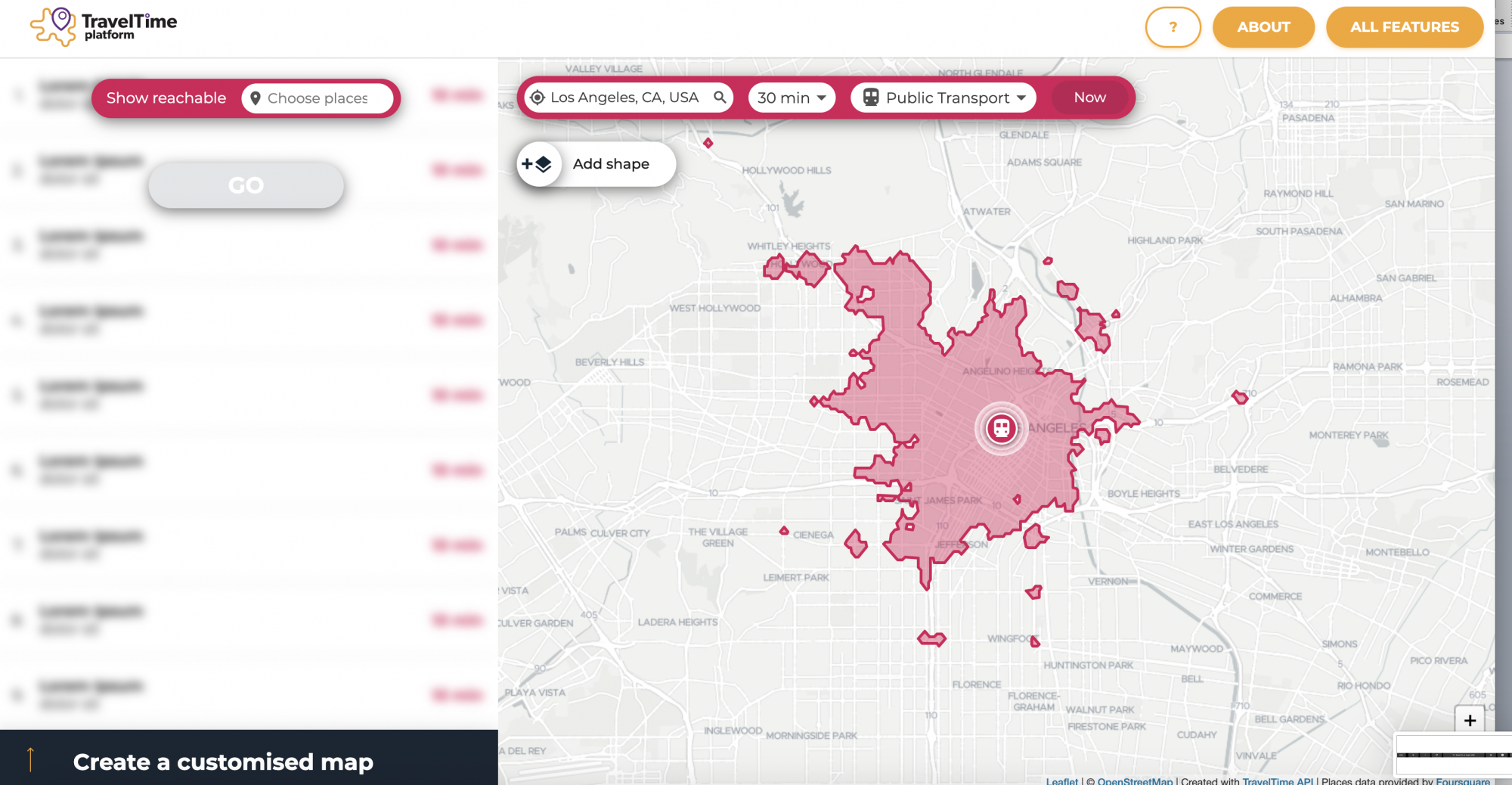 Websites that provide interactive maps of travel time estimates have been around for years, but as transit companies improve data sharing and that stock of available modes continues to expand, travel time mapping only becomes more relevant to people considering alternative modes of transportation. The TravelTime Platform offers multiple app products, and a free demo that is everything the casual observer or new initiate could want. An API and exports are available for a fee, which adds another, less recognized version of mobility-as-a-service. Here we have travel time mapping-as-a-service.