[This article was originally posted on October 1, 2011]

Once again the Texas Transportation Institute (TTI) published its annual Urban Mobility Report (UMR), and once again I feel obliged to warn planners that it is based on faulty assumptions and biased analysis methods. This is not to deny that traffic congestion is a significant problem, but the UMR significantly exaggerates its importance compared with other transport costs and exaggerates roadway expansion benefits.

The report's major errors and biases are summarized below. For more information, see my recent study, "Smart Congestion Relief: Comprehensive Analysis Of Traffic Congestion Costs and Congestion Reduction Benefits," and Joe Cortright's report, "Driven Apart: How Sprawl is Lengthening Our Commutes and Why Misleading Mobility Measures are Making Things Worse." For even more detailed information, see Grant-Muller and Laird's "International Literature Review of the Costs of Road Traffic Congestion." 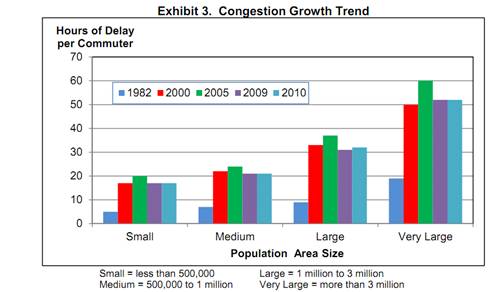 The TTI report reflects the old transport planning paradigm, which assumes that transportation means driving, so transportation problem means a constraint on driving, and transportation improvement means easier and faster driving. The new paradigm recognizes that driving is just on form of transport, there are many types of transport problems, and there are many ways to improve transport. Even using the TTI's own estimate that U.S. urban traffic congestion costs $101 billion annually, congestion ranks as a moderate cost overall, far less than vehicle, accident, and parking subsidy costs, and about equal to pollution costs. This means, for example, that it would be economically inefficient to implement a strategy that reduced congestion by 20 percent if doing so increases total vehicle expenses, crash damages or parking costs by just 5 percent, but a congestion reduction strategy becomes far more cost effective if it provides even modest reductions in these other costs.

These criticisms have been raised in previous years by myself, economist Joe Cortright, and others. If the UMR was a serious study it would include detailed discussion of these criticisms. Ignoring these issues indicates that TTI willingly promotes inaccurate analysis and ignores other perspectives.